With Armory Show, the World Is Catching Up to Carrie Mae Weems 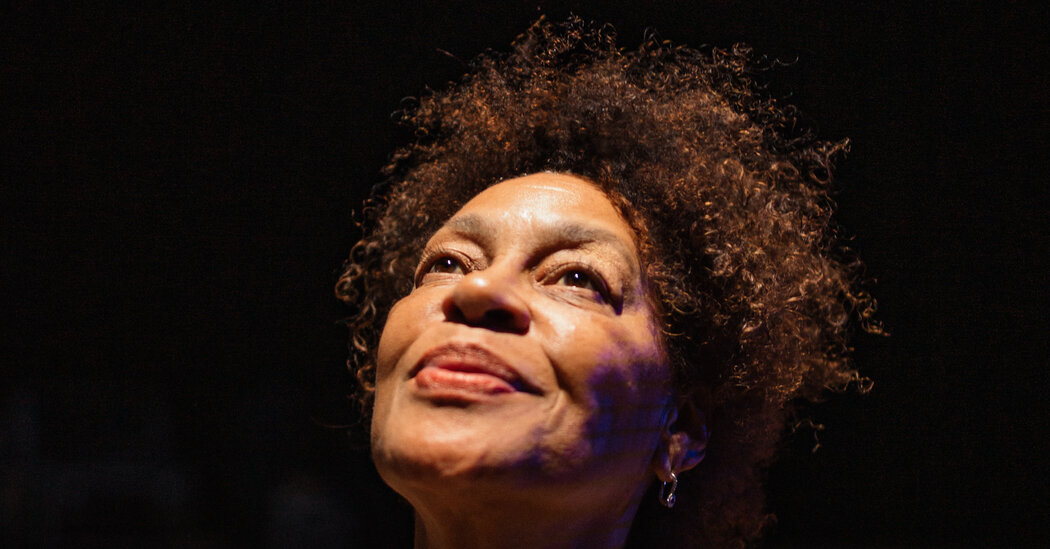 Now, of course, the entire nation is confronting issues of police violence against Black people; the exclusion of people of color from the museum canon; and the lack of Black and brown representation in Hollywood. But those who have followed Weems over the 40 years of her practice — through photography, video, installation, music and text — say the artist has always been ahead of her time.

Starting Dec. 2, in a strong indication that the world has caught up to her, Weems is taking over the Park Avenue Armory’s massive Drill Hall with “The Shape of Things,” billed as “the largest, most significant exhibition of her multidisciplinary artistic practice in the last decade.”

“She’s a 21st-century oracle,” said Sarah Elizabeth Lewis, an associate professor of the history of art and architecture and African and African American studies at Harvard University. “Carrie has been at the forefront of addressing issues to do with, not just our humanity, but the racial dimensions of it. You want to probe the history of injustice and redemption? You must understand the work of Carrie Mae Weems.”

In a recent interview — one that had to be conducted by telephone because of a Covid exposure scare (she later tested negative) — the artist, 68, emphasized her longstanding engagement with social justice.

“I’ve been working with these ideas for years,” she said. “They’re not trending for me.”

The reckoning around race now underway at museums in the wake of George Floyd’s killing in part represents a “knee-jerk reaction to what happened in the last two years,” Weems said, adding that people of color are suddenly being thrust into positions they should have always had access to.

But Weems — whose sonorous voice both lilts and lulls — said she is also hopeful about this juncture’s potential for lasting change. “I am excited by this moment, I’m also a little terrified by the moment,” she said. “I’m very much looking forward to seeing how institutions negotiate their futures and what that might mean, because I don’t think we really know yet. Right now we’re kind of swimming in the dark, just trying to figure out one day at a time how to move this ball up the hill without completely understanding how steep the hill is.”

It’s a reason her practice — as well as the Armory show — includes “convenings,” meetings of typically siloed experts talking to each other, which Weems sees as essential to progress. The Armory’s list of scheduled participants ranges from the painter Torkwase Dyson to the writer and curator Simon Wu.

“I’m interested in how you unite people across certain ideas and platforms,” Weems said. “One of the things that a lot of institutions say is, ‘We don’t know the African American artists, we don’t know the brown curators, we don’t know who they are.’ Well, here are 150 of them for you to choose from.”

Perhaps best known for her “Kitchen Table Series” (1989-90), a succession of staged scenes featuring the artist that explore womanhood — raising children, negotiating a relationship — Weems has been steadily creating projects that critique the culture.

The culture, in turn, has acknowledged her contributions: In 2013, she was the recipient of a “genius grant” from the MacArthur Foundation, and the following year she became the first Black woman to have a retrospective at the Guggenheim.

Her idea for the Armory show was hatched after a daylong convening she organized there in December 2017, a little over a year after President Donald J. Trump’s election. “I thought a lot about the circus of politics and the politics of circus and the history of violence and how to bring all of these ideas together,” she said.

Trump’s presidency, along with what she saw as a clear backlash against President Barack Obama because of his race, made Weems want to unpack how the country is handling “the browning of America.”

“How will institutions negotiate this,” she said, “whether they are museums or galleries or institutions like the Armory?”

Among the new works in the current show, which runs through Dec. 31, Weems has also sought to explore whether the signs of progress prompted by the Black Lives Matter movement will prove to be more than a passing crisis of national conscience. “To what extent is that sustainable?” she said. “How we now move forward is a very deep and important question.”

The show includes a series of large-scale installations, including a Cyclorama (a panoramic image on the inside of a cylindrical platform) of new and existing film footage, and her 2012 “Lincoln, Lonnie, and Me,” a digital video projection utilizing an optical illusion in which she considers Abraham Lincoln and the Gettysburg Address.

The current salience of Weems’s questions “speaks to the cyclical nature of our history,” said Avery Willis Hoffman, the artistic director of the Brown Arts Institute at Brown University, who is participating in the Armory show. “We have to keep returning to some of these hard and challenging topics.”

In 1984, Weems said, she learned that the U.S. population would, over the next 20 years, become dominated by people of color, which prompted a spate of demographic research that she continues to this day — in part through public discourse.

“Carrie is doing some truth-telling when she is able to bring people into the room who she has learned from and who she has taught,” said Thomas J. Lax, the curator of media and performance at the Museum of Modern Art. “With her sense of immediacy and mise en scène, she’s created a mode of participation in which you are required to be present, to participate.”

Weems often explicitly uses her art as a form of activism. During the pandemic, she created a public art campaign to draw attention to the disproportionate impact of Covid-19 on the Black, Latino and Native American communities. Called “Resist Covid/Take 6!” — a reference to six-foot social distancing — the art-focused messages appeared on billboards, shopping bags, buttons and refrigerator magnets.

“I see myself very much involved in attempting to deal with the issues of my time in the best way I know how,” she said.

She also tries to use her work as a way to cultivate and promote empathy, Weems said, to understand those she may oppose — even the white supremacist groups that marched on Charlottesville, Va., in 2017.

“When I think of these forces on the right, I have sympathy, because I’m human,” she said. “A change is coming that does not necessarily reflect who you thought you were — I understand that fear. Then maybe there is space for some dialogue, for some sort of progress.”

This effort to get to that humanity prompted Weems’s 2016 project “Grace Notes: Reflections for Now,” a theater piece inspired by a white gunman’s killing of nine people at a historic Black church in downtown Charleston, S.C., the year before, told through the story of a woman trying to bury her brothers.

“I have this beautiful recorded conversation with my mother talking about the meaning of grace as a deep space of compassion, understanding, charity and love,” Weems said. “It was through her answering that question for me that I was able to come to a certain level of clarity.”

Weems recalled another formative conversation with her mother, Carrie Polk — a former factory and domestic worker who is still living — from when she left home to make her way as an artist. “I was wondering what my mother thought of me, and one day she called while I was living in San Francisco and said, ‘I wish I had done with my life what you’re doing with yours,’” Weems said. “It gave me such confidence. Even though I was wild and crazy and living alone at a very young age, she encouraged me.”

Her father, Myrlie Weems, who died in 2002, was similarly inspiring. The owner of a salvage company called Speedy and Son, he also had a creative streak, having sung with his brothers on the same stage as Sam Cooke in the Mississippi Delta. “He told me from a very young age that I had a right to be in any room,” Weems said. “That great lesson anchored me in a very profound way.”

Born in Portland, Ore., in 1953, the second of seven children, Weems became interested in painting and drawing early on. “I remember rushing to the attic and pretending I was living somewhere else,” she said, “dancing around the living room, pretending I was a ballerina.”

At 16, she had a daughter, Faith C. Weems, who now works with children in California. The following year, she joined Anna Halprin’s experimental San Francisco Dancers’ Workshop and later moved to New York, studying photography at the Studio Museum in Harlem.

A boyfriend gave her a camera for her 20th birthday. “I took to it like a fish to water,” Weems said. “I just immediately saw it as a tool that would lead me into my life and through the world.”

She was also introduced to Black photographers, including Roy DeCarava and his Kamoinge Workshop. “I thought, ‘Oh,’” Weems said, “‘this is where I want to be.’”

In 1985, she married Jeff Hoone, who recently stepped down as director of the photography nonprofit Light Work. Weems described him as “my greatest understanding mate in the world.” They live in Syracuse, N.Y., but also have a home in Fort Greene, Brooklyn.

“Clearly younger artists today are descendants of Carrie Mae Weems, so it’s a great moment to show a large body of work and to show new work,” said Tom Eccles, who curated the Armory exhibition. “Some artists need a change of a moment when suddenly you realize how relevant that work is.”

Eccles, executive director of the Center for Curatorial Studies at Bard College, said he was surprised that Weems asked him to work on her show. “I said to her, ‘Hey, Carrie, I’m white,’” he said. “She said, ‘That doesn’t worry me.’”

The exhibition would seem to reflect the artist’s status as an exalted member of the establishment. But Weems said she will never feel that she has arrived or is finished.

“I see myself as an artist very interested in certain concerns, and those concerns have not yet been met,” she said.

“It is a lifelong struggle and it doesn’t end with the completion of a body of work,” she added. “It is a life.”