With ‘Only One to Choose From,’ a Great Choice 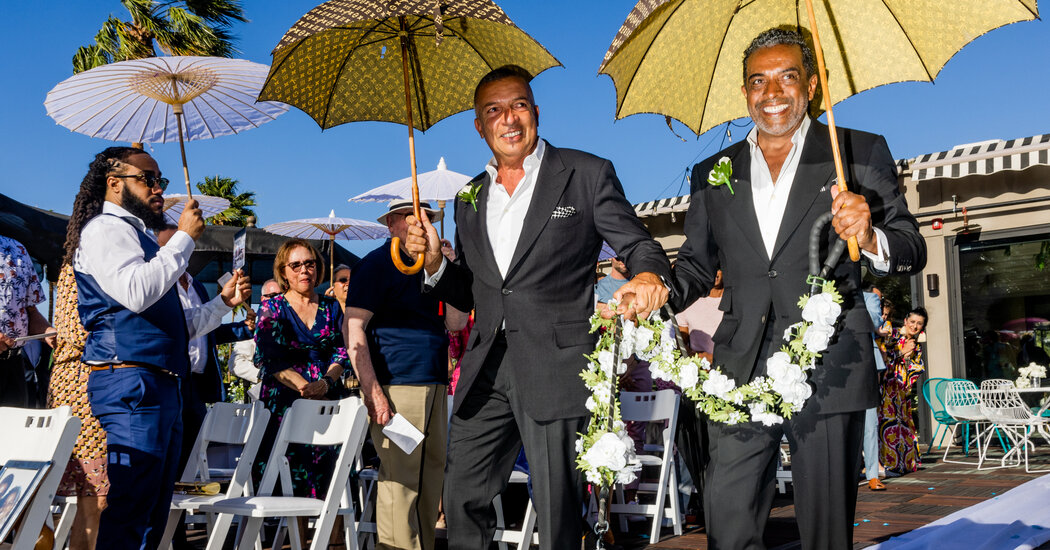 Their wedding, first planned for New Year’s Day 2022, was postponed because of the Omicron variant. They were married April 9 in front of 72 guests on the rooftop of Flannery Exchange, an office building and events venue in downtown Palm Springs, with the San Jacinto Mountains as a backdrop. Tony Bradford, a minister of the Centers for Spiritual Living, officiated.

Beau served as best dog at the ceremony, which also included a moment of silence honoring Mr. Taylor’s daughter, Michquel, and remarks by Mr. Goode. Speaking before the grooms and their guests, he asked: “What happens when two mature gentlemen, elders of the queer community, decide to get married?”

Answering his own question, Mr. Goode said, “The concept of family, the idea, is dignified and uplifted and the whole extended family is brought in to celebrate and to share and to feel the great privilege of being part of something beautiful.”

The Attire Both grooms wore dark Tom Ford suits at the ceremony. For the reception that followed, they changed into vintage dinner jackets; Mr. Taylor’s, from Valentino, was silk plaid, and Mr. Vincent’s, from Lanvin, was off-white linen.

The Menu The couple hired Betty Berrysmith, a local Black chef, to prepare the food at their wedding, some of which was made with produce that Mr. Taylor bought at a farmer’s market. An accomplished cook, Mr. Taylor also made a corn soup that was served as an appetizer. All wines served came from Black-owned vineyards in California, and the grapefruit and lemon juices used in cocktails came from fruit grown on trees in the couple’s yard.