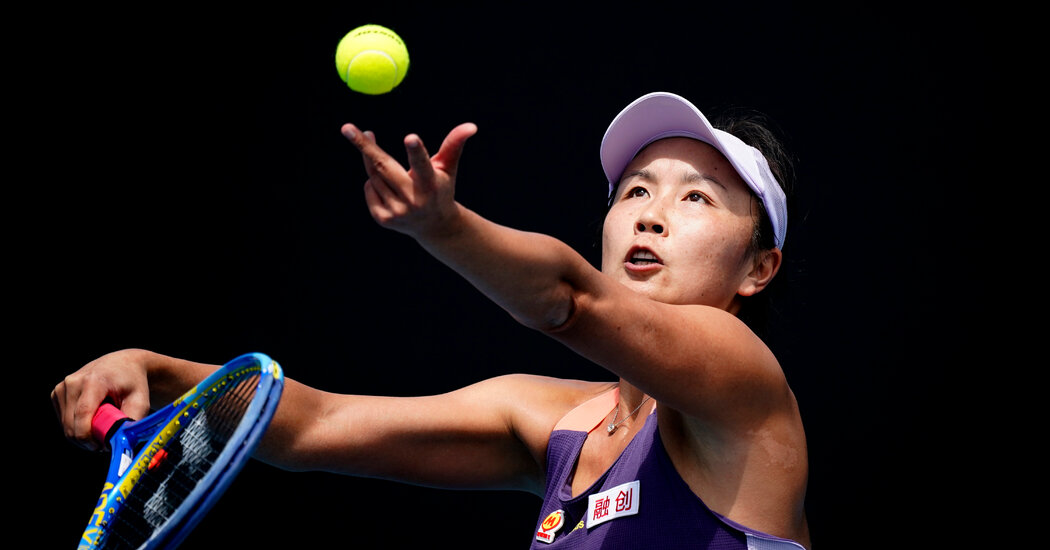 The top official overseeing women’s tennis on Wednesday directly challenged the narrative presented by Chinese state media that a professional player had walked back allegations of sexual assault against a top Communist Party official, saying he feared for her well-being.

China Global Television Network, an English-language broadcaster controlled by the Chinese government, on Wednesday distributed an email that it said had been written by Peng Shuai, the professional player. Ms. Peng has not been seen in public since Nov. 2, when she posted the accusation on social media against Zhang Gaoli, a former vice premier.

According to C.G.T.N., Ms. Peng said in her email that “I am not missing, nor am I unsafe. I’ve just been resting at home and everything is fine.” The email also said the allegation of sexual assault “is not true.”

Steve Simon, the chief executive of the WTA Tour, cast doubt on the veracity of the email.

“The statement released today by Chinese state media concerning Peng Shuai only raises my concerns as to her safety and whereabouts,” he said in a statement. “I have a hard time believing that Peng Shuai actually wrote the email we received or believes what is being attributed to her.”

Mr. Simon said he had repeatedly tried to reach Ms. Peng, without success.

“Peng Shuai must be allowed to speak freely, without coercion or intimidation from any source,” the statement added. “Her allegation of sexual assault must be respected, investigated with full transparency and without censorship.”

Ms. Peng’s Nov. 2 post briefly sent shock waves through Chinese society. Other high-profile men have been accused of sexual misconduct amid the country’s budding #MeToo movement. But her accusation touched the highest levels of its political leadership. Mr. Zhang had been a member of the Communist Party’s Politburo Standing Committee, its highest ruling body, between 2012 and 2017.

Her post and any discussions of it were immediately taken down from China’s heavily censored internet. Ms. Peng’s verified account on the social media platform Weibo was also taken down, though on Thursday it appeared to have been restored, with all posts after early 2020 deleted.

Neither Mr. Zhang nor the Chinese government have publicly commented on Ms. Peng’s allegations, which could not be independently verified. The statement from C.G.T.N. did not appear to have been published on China Central Television, its Chinese-language state-run parent, or on other official Chinese-language media.

Some of the tennis world’s biggest stars have spoken out in recent days in support of Ms. Peng and called for an investigation into Ms. Peng’s allegations.

Naomi Osaka of Japan wrote on Twitter that “censorship is never ok at any cost.” Chris Evert, the American former world champion, called the accusations “very disturbing.” The British tennis player Liam Broady wrote of Ms. Peng’s disappearance, “I can’t believe this is even happening in the 21st century.”

The WTA’s comments and attention on Ms. Peng could hurt the tour’s lucrative business relationship with China, but that didn’t appear to stop the tour from continuing to speak out.

Mr. Simon first called on the Chinese authorities to investigate Ms. Peng’s allegations on Sunday and suggested that the tour might stop doing business in China if the WTA did not “see appropriate results.”

The governing body of men’s tennis, the ATP Tour, later weighed in to support calls to investigate Ms. Peng’s allegations.

“We have been deeply concerned by the uncertainty surrounding the immediate safety and whereabouts of WTA player Peng Shuai,” Andrea Gaudenzi, the chairman of the ATP, said in a statement.

The ATP, he wrote, stood “in full support of the WTA’s call for a full, fair and transparent investigation.”