A Transformative Justice Whose Impact May Be Limited 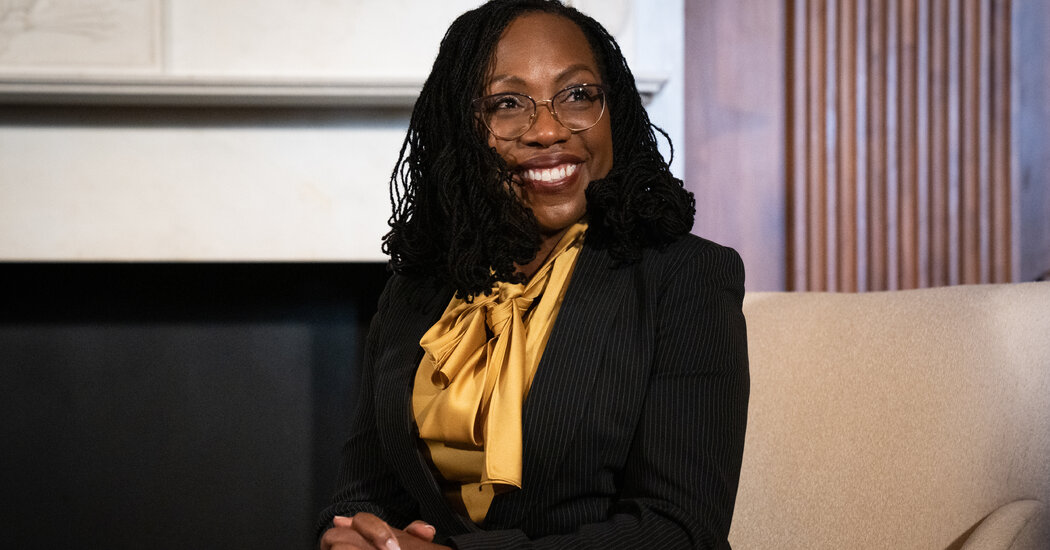 WASHINGTON — Judge Ketanji Brown Jackson, the first Black woman confirmed to the Supreme Court, will in one sense transform it. Once she replaces Justice Stephen G. Breyer, one of the 108 white men who preceded her, the court will look a lot more like the nation it serves.

But that new tableau on the court’s grand mahogany bench will mask a simple truth: The new justice will do nothing to alter the basic dynamic on a court dominated by six Republican appointees.

However collegial she may be, whatever her reputation as a “consensus builder” and whether her voting record will be slightly to the right or the left of Justice Breyer’s, the court’s lopsided conservative majority will remain in charge. Judge Jackson will most likely find herself, as Justice Breyer has, in dissent in the court’s major cases on highly charged social questions.

Indeed, in an institution that prizes seniority, the court’s three-member liberal wing is apt to lose power.

The viciousness of the fight over Judge Jackson’s confirmation was, then, wholly at odds with what was at stake in the actual work of the court, at least in the short term.

Justice Breyer will stay on the court through the end of the current term, in late June or early July. He has lately been on the losing side in rulings refusing to block a Texas law that bans most abortions after six weeks and shutting down Biden administration programs meant to combat the coronavirus pandemic.

There is no reason to think that Judge Jackson will have any more ability to halt the court’s rightward march in the marquee cases the court will hear after the justices return from their summer break and she takes the bench.

To the contrary, she said at her confirmation hearing that she planned to recuse herself from one of next term’s blockbusters, a challenge to Harvard’s race-conscious admissions program, given her service on one of the university’s governing boards.

But she is not expected to disqualify herself from a companion case, about the admissions program at the University of North Carolina, which presents somewhat broader questions and will now become the main attraction.

There is no direct evidence from Judge Jackson’s judicial record about how she is likely to approach the case. But her supporters and opponents alike are confident that she will vote to uphold programs in which colleges and universities take account of race as one factor among many in admissions decisions.

The court’s more conservative members, on the other hand, appear to be ready to say that the Constitution and a federal law forbid such programs. That would represent a sharp break from more than four decades of precedents.

As recently as 2016, the Supreme Court ruled that the University of Texas at Austin could continue to consider race as a factor in ensuring a diverse student body.

In an interview not long after the Texas case was decided, Justice Ruth Bader Ginsburg said, mistakenly as it would turn out, that the decision would be the last word on the subject. “I don’t expect that we’re going to see another affirmative action case,” she said, “at least in education.”

Justice Ginsburg died in 2020, and she was replaced by the third of President Donald J. Trump’s three appointees, Justice Amy Coney Barrett, creating a conservative supermajority on a court that had for decades been closely divided.

The Texas ruling essentially reaffirmed Grutter v. Bollinger, a 2003 decision that endorsed holistic admissions programs. Writing for the majority, Justice Sandra Day O’Connor said she expected that “25 years from now,” the “use of racial preferences will no longer be necessary.”

If the court strikes down the admissions programs at Harvard and U.N.C. in the spring or summer of 2023, as seems likely, it will beat Justice O’Connor’s deadline by five years.

Judge Jackson will also participate in the latest clash between claims of religious freedom and gay rights, this time in a case about a web designer who objects to providing services for same-sex weddings. The court considered a similar dispute in 2018 in a case about a Colorado baker, but Justice Anthony M. Kennedy’s muddled and limited majority opinion did not resolve the basic issue.

Justice Kennedy retired later that year, and he was replaced by the more conservative Justice Brett M. Kavanaugh. The court, which has been exceptionally receptive to cases brought by religious groups and individuals, is likely to issue a ruling favoring the web designer.

Judge Jackson has no judicial track record in this area, either, but it would be a surprise if she joined the court’s conservatives.

In the third major case already on the court’s docket for its next term, the justices will consider the role race may play in drawing voting maps. The court may have tipped its hand in February, when it temporarily reinstated an Alabama congressional map that a lower court had said diluted the power of Black voters, suggesting that the court was poised to become more skeptical of challenges to maps based on claims of race discrimination.

The court will hear an appeal in the same case soon after Judge Jackson arrives. But the court’s order in February indicated that there may already be five votes to continue one of the signature projects of the court led by Chief Justice John G. Roberts Jr., that of limiting the force of the Voting Rights Act of 1965.

In earlier decisions, the Supreme Court effectively gutted Section 5 of the law, which had required federal approval of changes to state and local voting laws in parts of the country with a history of racial discrimination, and cut back on Section 2 of the law, limiting the ability of minority groups to challenge voting restrictions.

The Alabama case also concerns Section 2, but in the context of redistricting. The court’s liberals were in dissent when the court issued its provisional order in February, and they are likely to be in the same position when the court rules on the merits of the case.

As the junior member of the court, Judge Jackson will have at least two distinct responsibilities. She will serve on a committee that oversees the court’s cafeteria, and she will answer the door at the justices’ private conferences when law clerks are summoned to deliver a forgotten item.

As for the real work of the court, justices say it can take quite some time to feel comfortable.

“I was frightened to death for the first three years,” Justice Breyer, who joined the court in 1994, said in a 2006 interview.

Estimates have not changed over time. “So extraordinary an intellect as Brandeis said it took him four or five years to feel that he understood the jurisprudential problems of the court,” Justice Felix Frankfurter wrote of Justice Louis D. Brandeis, who sat on the court from 1916 to 1939.

Judge Jackson is only 51, and she will probably serve for decades, gaining experience and stature. The court’s membership will change over those years — four of the justices she will join are 67 or older — and its direction may, too. That could make Judge Jackson not only a pathbreaking justice but also an influential and consequential one.