A Whitney Biennial of Shadow and Light 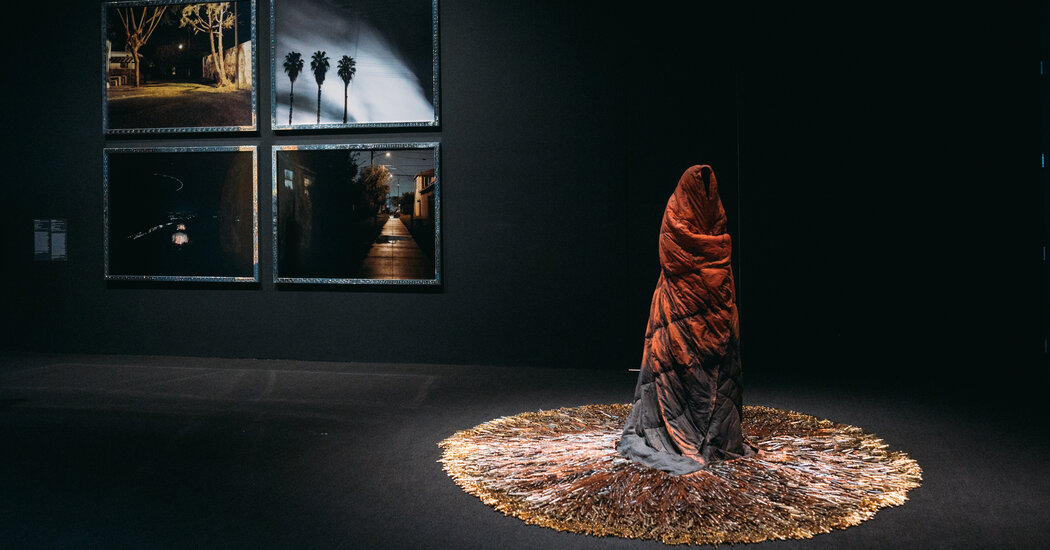 After a year’s Covid delay, the latest Whitney Biennial has pulled into town, and it’s a welcome sight. Other recent editions — this is the 80th such roundup — have tended to be buzzy, jumpy, youthquake affairs. This one, even with many young artists among its 60-plus participants, most represented by brand-new, lockdown-made work, doesn’t read that way. It’s a notably somber, adult-thinking show, one freighted with three years of soul-rattling history marked by social divisiveness, racist violence and relentless mortality.

Organized by two seasoned Whitney curators, David Breslin and Adrienne Edwards, the Biennial’s title, “Quiet as It’s Kept” — a colloquial phrase, sourced from Toni Morrison, indicating dark realities unspoken of — suggests the show’s keyed-down tone. Its very look gives a clue to its mood: Its main installation, on the 5th and 6th floors of the Whitney Museum of American Art, is literally split between shadow and light.

For the occasion, the museum has removed nearly all the dividing walls on its fifth floor, opening its Manhattan space from end to end — from Hudson River to High Line — and spread out art in island-like units throughout. The arrangement isn’t beautiful; it has a jumbled, salesroom look. But it called to mind, for me, a quietly utopian art-world moment.

In 2009, a local nonprofit entity called X Initiative, made up of artists, dealers and curators, staged an event in Chelsea, not far from the present Whitney, called “No Soul for Sale: A Festival of Independents.” It brought together dozens of alternative galleries and organizations under one roof and used exactly this boundary-less format — one that did away with art fair-style booths and V.I.P. lounges, not to mention admission fees — and let art and its audiences mingle freely, sharing common air and light. (The city’s Independent Art Fair originally adopted the no-walls model but soon dropped it.)

As the curators have emphasized in statements about the show, the idea of boundaries, and getting rid of them, were important to their thinking about this biennial, starting with questions (also addressed by the 2019 edition) of how to break down the geopolitical borders that have traditionally defined and delimited the Whitney’s version of “American art.”

Of the 2022 artists, three live and work in Mexico (Mónica Arreola, Alejandro Morales and Andrew Roberts), and two in Canada (Rebecca Belmore and Duane Linklater, both of whom are of Indigenous heritage). More than a dozen were born outside the continental U.S.; some still live elsewhere part-time. One, Rayyane Tabet, who lists Beirut and San Francisco as home, was in the process of applying for U.S. citizenship when the Biennial was being assembled, and in a series of text pieces posted inside and outside the museum, quotes from the official U.S. naturalization test.

Borders within art media are scrambled too. The curators have expressed strong interest — partly, I would guess, in reaction to the current market fixation on figure painting — in abstraction as a liberating mode, one that can free art from specific social and political meanings, but also — quiet as it’s kept — accommodate these.

Painters of an older generation, James Little and Denyse Thomasos (1964-2012), whose work appears to fall into a Modernist tradition of “pure” abstraction on which the Whitney itself was built, illustrate this dynamic. Two spectacular pictures by the Trinidad-born Thomasos are all about painterly gesture, but they’re also all about the history of Black captivity, past and present, as their titles — “Displaced Burial/Burial at Goree” and “Jail”— reveal.

Little, who showed for decades with the veteran New York gallerist June Kelly and is now attracting wide notice, also lets titles tell a tale. In his magisterial, all-black, oil-and-wax “Stars and Stripes” (2021), it’s hard to say whether the bars that make up its geometric pattern are converging or colliding.

Of other abstract painting in the show, the ones of interest are those that touch on other disciplines. Two large paintings by Linklater use tepee forms as a template. Tapestry-like hangings by the artist Lisa Alvarado were made as environments for musical performances in which she participates. The Puerto Rican artist and choreographer Awilda Sterling-Duprey, who is in her 70s and counts John Cage and Afro-Cuban religious ritual among her influences, paints while dancing, blindfolded, to jazz recordings. (Her three pieces in the show were executed on site in the museum.)

Performance merges with abstract sculpture in a video by the estimable Dave McKenzie, whom we see improvising balletic encounters with stray objects in his studio, where he seems to have spent a good deal of lockdown time. And Alex Da Corte brings off a kind of formal trifecta in a 2022 video in which he acts multiple roles (Marcel Duchamp, the Joker), while embracing historic sculptures (Brancusi’s) and defacing — that is, repainting — historic pictures, Gainsborough’s “The Blue Boy” among them.

Every Biennial produces at least one audience favorite, often a video. The Da Corte piece — funny, creepy, lushly produced — is a natural candidate. (By rights, Jacky Connolly’s four-channel “Descent into Hell,” comparably weird but, in its tight, wraparound format, harder to watch, should be in the running too.) By contrast, what’s less likely to grab attention is work in a different medium — language, visual and spoken — though the show is rich in it. It’s in Jane Dickson’s paintings of urban signage; in Tony Cokes’s fast-flashing video texts (“How to mourn mass death?,” “I CN’T BRTH”), and in Ralph Lemon’s drawing and paintings suggestive of a kind of cosmic dance notation. Most of these are all on the 5th floor, though the main concentration of word-based art is on the 6th floor, where partition walls are up, gallery lights are low, and the soul of this Biennial is focused.

In a sense, the political spirit of this border-conscious, history-telling Biennial, and like-minded ones that have preceded it, have sprung from a single declarative eight-word sentence — “I Can’t Imagine Ever Wanting to Be White” — which, controversially, was printed on metal admission tags made for the 1993 edition. The phrase and the tags were conceived by the artist and provocateur Daniel Joseph Martinez, who later contributed to the 2008 show, and does again to the present one.

For his 2022 new work, he photographed himself in the (prosthetically enhanced) guise of five pop-cultural “post-human” antiheroes including Frankenstein, Count Dracula and the Alien Bounty Hunter from “The X-Files.” But what makes the piece gripping is a statement that accompanies the images, a scathing indictment of the human race as the earth’s “ultimate invasive species,” one that’s about to self-destruct and take every other living thing down with it.

The work’s eschatological tone finds an echo in Alfredo Jaar’s taut video account, replete with special effects, of the 2020 police attack on demonstrators in Washington D.C. And there’s a tone of end-times mourning to Coco Fusco’s “Your Eyes Will Be an Empty Word,” a narrated video tour of Hart Island, the vast public cemetery in the East River that has, for over a century, received the bodies of New York City’s unclaimed dead, now including Covid victims.

Biennials are, almost by definition, in-the-now events (and encompass in-the-now politics: unionized Whitney workers seeking higher wages leafleted this Biennial’s V.I.P. opening this week). These events seldom traffic in the backward glance. But this one does. Fusco’s video is a meditation on what has vanished and continues to. Adam Pendleton’s video portrait of the theologian and social justice activist Ruby Nell Sales is a stirring tribute to a long, gallant personal history that continues into the present. Jonathan Berger’s utterly extraordinary sculptural installation “An Introduction to Nameless Love,” a giant book made of letters cut from tin, is a kind of walk-in “Lives of the Saints.” Some of those saints are still with us, some not.

And a sound piece called “Silent Choir” by the Navajo artist Raven Chacon — one of a cohort of outstanding Native American participants in this Biennial — is a document of the past unlike any other here. It’s a 2016 audio recording made during a silent vigil — an act of “sonic resistance” is Chacon’s term — organized by women protesting the Dakota Access Pipeline near Standing Rock, N.D. With only the sound of rustling and breathing and the occasional whir of surveillance helicopters breaking the silence, it’s a deeply moving piece of history-almost-not-there.

Moving, too, are a pair of tributes to cultural figures from the past that bookend the show. One figure is the artist Theresa Hak Kyung Cha. Born in South Korea in 1951, she immigrated with her family to the United States in 1962. By the end of that stormy decade — the student protest movement was on the boil, the feminist movement starting — she was studying art, film and literature at the University of California, Berkeley, and beginning to do experimental work in all three fields. This work took her to Paris, then back to Korea and finally to New York City, where she married the photographer Richard Barnes in 1982. On Nov. 5 of that year, she went to meet him at the Puck Building in Soho, and was raped and murdered by a security guard there. She was 31.

In the years since, her luminous art and writing have become hugely influential among young artists. And the Biennial’s mini-survey, housed in the equivalent of a small white tent on the fifth floor, gives a good sense of it, with examples of her handwritten notebooks and of videos. In one, the face of her sister Bernadette repeatedly flashed, for minutes on end, on the screen. Then suddenly a different face appears — that of the artist herself — but just once, and then is gone.

The other tribute, on the 6th floor, feels quite different in character: it’s to a man, a place, and a collective project. The man was Steve Cannon (1935-2019), a New York writer and teacher active in the downtown Black literary collective Umbra in the 1960s. (The poet N.H. Pritchard, whose hand-decorated manuscripts appear in the Biennial, was also an early member.) The place was Cannon’s East Village townhouse — home, beginning in the 1990s, to a project called A Gathering of the Tribes, which encompassed an art gallery, a performance space and an arts magazine still published online.

Over the years, countless artists, musicians and writers came through Tribes’ door, which never closed. And Cannon, who was blind, was always there, ready to give and take ideas, enthusiasms, opinions. The Biennial has recreated, or reimagined, the apartment setting, bringing in old furniture, installing a wall painting by Cannon’s friend, the artist David Hammons, and including personal items, like Cannon’s ever-present ashtray, along with stacks of the books, notebooks and magazines that filled the place. In short, it conjures up the ghost of a utopian situation. That a Biennial, a constitutionally of-the-moment enterprise, would do that, says something about the reflective spirit that sets this edition apart.