A World Away From Ukraine, Russia Is Courting Latin America 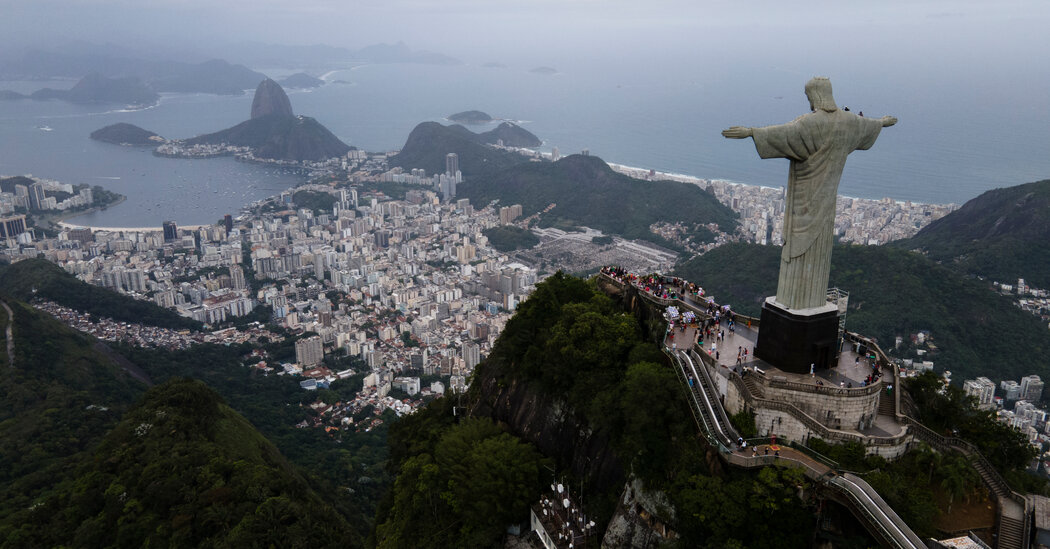 RIO DE JANEIRO — In the midst of his brinkmanship over neighboring Ukraine in recent weeks, President Vladimir V. Putin has also been busy trying to expand Russia’s influence thousands of miles away: in Latin America.

He spoke to Daniel Ortega, Nicaragua’s strongman president, for the first time since 2014. He also called the leaders of Venezuela and Cuba. He hosted the president of Argentina, Alberto Fernández, who vowed during a Kremlin visit to reduce his country’s reliance on the United States.

And on Wednesday — the same day that American officials have said could be the start of a Russian invasion — Mr. Putin is scheduled to meet with President Jair Bolsonaro of Brazil. Mr. Bolsonaro is flying to Moscow despite repeated entreaties from American officials in recent weeks that he postpone his trip as the West scrambles to pressure Mr. Putin over Ukraine.

The flurry of personal diplomacy directed at Latin America by Mr. Putin during the most high-stakes period of his tenure often builds on ties that go back to the Cold War and sheds light on the global nature of his ambitions: to exert influence even on faraway regions. He is stepping up engagement and building ties to an expanding swath of the Western Hemisphere — including to countries, like Brazil and Argentina, that have traditionally been close to Washington.

The intensified outreach has come as Mr. Putin has threatened to take unspecified “military-technical measures” if he does not get the Eastern European security guarantees he is demanding from the United States and NATO. Kremlin officials have dropped hints that such measures could involve military deployments in the Western Hemisphere, prompting analysts and the state-controlled media to indulge in feverish speculation that the moves could include audacious steps, not ruled out by Russian officials, like deploying nuclear missiles to friendly countries in Latin America.

As usual, Mr. Putin’s true intentions are hard to read. His outreach to Latin America could be a feint, a way to complicate the West’s response to his threatened invasion of Ukraine. At the same time, Latin American leaders have their own political agendas, and may be using Mr. Putin to gain leverage with the United States, which, along with China, still wields much greater influence in the region overall.

But the recent Latin American diplomacy is a reminder that to Mr. Putin, a broader goal is paramount in his foreign policy: to return Russia to the status of a great power capable of challenging the United States.

“Vladimir Putin views Latin America as still an important area for the United States,” said Vladimir Rouvinski, a professor at Icesi University in Cali, Colombia, who studies Russia’s relationship with Latin America. “So this is reciprocity for what is happening in Ukraine.”

Mr. Putin’s courtship of Latin America has been years in the making. He has been able to take advantage of ties dating to the Soviet era, local resentments against the United States and the whims of particular leaders. During the pandemic, as rich nations hoarded Covid-19 vaccines, the Kremlin grabbed another opening: In at least five Latin American countries — Argentina, Venezuela, Nicaragua, Bolivia and Paraguay — Russia’s Sputnik V vaccine was the first to arrive.

“You were there,” Mr. Fernández told Mr. Putin at the Kremlin last month, “when the rest of the world wasn’t.”

The Russian Foreign Ministry, in a written response to questions, said Latin America “was and remains for us a region of political goodwill, economic opportunity, cultural closeness and a similar mentality.”

“Russia never participated in colonizing the region, in exploiting the peoples that populate it, or in any conflicts, wars or other uses of force,” the ministry said.

Despite Russia’s efforts, the U.S. and China have far larger economic ties to the region. In 2019, for example, South America exported $5 billion to Russia, compared with $66 billion to the United States and $119 billion to China, according to data compiled by Harvard University.

China’s influence, in particular, has grown thanks to its financing of tens of billions of dollars in infrastructure projects across Latin America, from an elevated metro in Colombia to a space station in Argentina. That economic leverage has put its diplomatic might in the region arguably on par with the United States.

Russia’s specialty in the region has been political support for countries that are becoming isolated on the global stage. Mr. Putin has been a diplomatic lifeline for the authoritarian leaders of Venezuela, Cuba and Nicaragua. And for Mr. Bolsonaro of Brazil, who has sharply criticized China and questioned President Biden’s electoral victory, Mr. Putin extended an invitation when it appeared many other countries wouldn’t.

During Mr. Trump’s presidency, the United States and Brazil were as close as they had been in decades. But when President Biden arrived in the White House, he did not reach out to Mr. Bolsonaro, who had publicly questioned whether Mr. Biden won the 2020 election and was making his own efforts to undermine the upcoming Brazilian vote.

Eventually, Mr. Bolsonaro began asking U.S. officials for an invitation to Washington or at least a phone call from the new president, according to two senior U.S. officials who insisted on anonymity because they were not authorized to speak publicly. Mr. Bolsonaro warned that if he did not hear from President Biden, he would seek a summit with another world power, the officials said.

Mr. Putin at the time was making more intense overtures to Mr. Bolsonaro. The two presidents discussed a potential expansion of trade and agreements on science and security, the U.S. officials said.

Then, in December, with no phone call from Mr. Biden and increasing tensions in Eastern Europe, Mr. Bolsonaro accepted Mr. Putin’s invitation to Moscow. The White House was not happy. Senior U.S. officials twice contacted Mr. Bolsonaro’s administration to convey their concern that it was a bad time to travel to Moscow given the ongoing negotiations over Ukraine.

When asked recently about the lack of contact between Mr. Biden and Mr. Bolsonaro, Jen Psaki, the White House press secretary, pointed to conversations between Secretary of State Antony Blinken and his Brazilian counterpart in which he stressed “the need for a strong united response against further Russian aggression against Ukraine.”

Mr. Bolsonaro told the Brazilian press that the Russian summit was important for his administration and that he would not bring up Ukraine. In a statement, his government said that given Brazil and Russia’s relationship, continued dialogue “is more than just expected — it’s necessary.”

Still, Mr. Bolsonaro has faced intense criticism over the trip, including from some allies.

“I think it’s wrong in many ways,” said Ernesto Araújo, Mr. Bolsonaro’s foreign minister until last year. “In other circumstances, it’s ok. But with the looming crisis, it’s not.”

The most inflammatory step Mr. Putin could take would be providing military support or deploying weapons in the region. When asked in mid-January about the possibility that Russia could put military infrastructure in Venezuela or Cuba, a Russian deputy foreign minister said he would not rule anything out. Within days, Mr. Putin held calls with the leaders of Venezuela, Cuba and Nicaragua — conversations, the Kremlin said, that affirmed the countries’ “strategic partnership” with Russia.

The State Department dismissed the talk of potential Russian deployments as “bluster.”

“If we do see any movement in that direction, we will respond swiftly and decisively,” the department’s spokesman, Ned Price, told reporters.

Analysts in Latin America are skeptical that Mr. Putin would deploy weaponry to the region, in part because doing so could wreck much of the goodwill Russia has worked to create across Latin America.

Still, Russia has been instrumental in arming its closest allies in Latin America. Russia has sold weapons and tanks to Cuba and Nicaragua, and aircraft and antimissile systems to Venezuela. It also held bilateral military exercises with Venezuela.

U.S. officials believe Russia is aiding Venezuela’s military, in addition to using the country for intelligence operations and money laundering, according to a senior U.S. official.

The U.S. is also concerned about Russian efforts to interfere in Colombia’s election in May, possibly to aid the leftist front-runner, who could be a more friendly negotiating partner for Mr. Putin than the current right-wing administration. U.S. officials have previously observed Russian online influence operations trying to sow unrest in South America.

But in the near term, analysts said, Russia’s most important benefit from Latin America will likely be diplomatic support.

Earlier this month, Argentina’s president, Mr. Fernández, visited Moscow and China on a tour partly intended to seek new benefactors. Argentina owes the International Monetary Fund more than $40 billion and has been shut off from international capital markets. Ahead of his visit, Mr. Fernández granted an exclusive interview to the Spanish-language arm of RT, the Kremlin-funded television network, which now reaches about 20 million viewers in Latin America a week.

“I’m determined that Argentina must stop being so dependent on the Fund and the United States,” Mr. Fernández told Mr. Putin. “That is where it seems to me Russia has a very important place.”