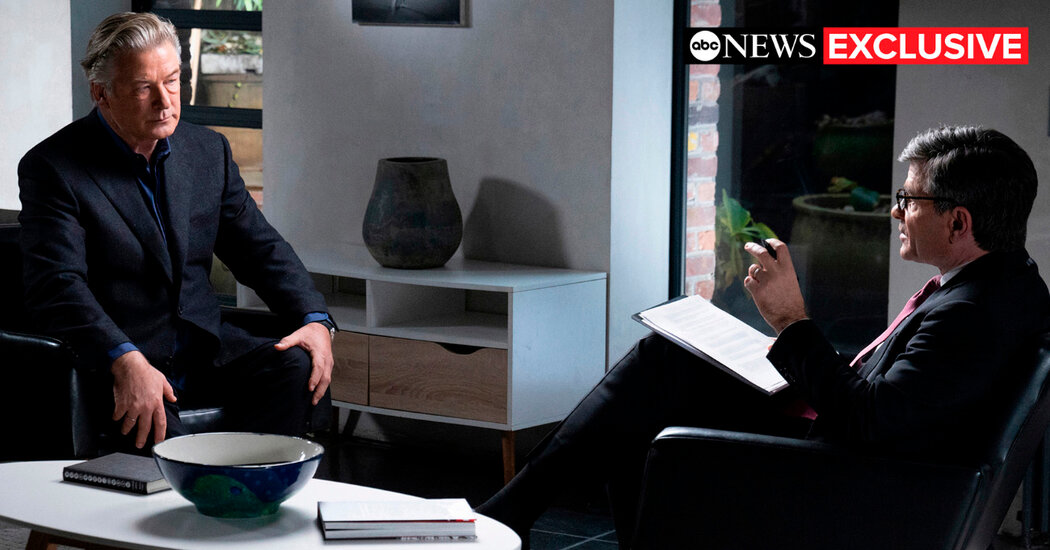 The actor Alec Baldwin said in an upcoming television interview that he did not pull the trigger of the gun he was practicing with on the set of the film “Rust,” which fired a live round as he held it, killing the film’s cinematographer and wounding its director.

“I would never point a gun at anyone and pull a trigger at them — never,” Mr. Baldwin told George Stephanopoulos in an ABC News interview that is scheduled to be broadcast Thursday night at 8 p.m. Eastern. The network posted brief excerpts from the interview Wednesday as a preview.

The exchange came after Mr. Stephanopoulos noted that it had not been part of the script for the trigger to be pulled in that scene. Mr. Baldwin jumped in: “Well, the trigger wasn’t pulled. I didn’t pull the trigger.”

He did not elaborate on why the gun might have gone off in the excerpt ABC provided.

Mr. Baldwin’s account adds another layer of mystery onto the fatal shooting, which took place on Oct. 21 on a set of a church near Santa Fe, N.M. Mr. Baldwin was practicing drawing an old-fashioned revolver that he had been told contained no live rounds when it suddenly fired, killing the film’s cinematographer, Halyna Hutchins, 42, and wounding its director, Joel Souza, 48.

It still remains unclear how a lethal bullet got into the gun that he was practicing with, and why the crew members who handled it before passing it to Mr. Baldwin failed to detect that it contained a live round when it was supposed to have only dummies.

In the clip of the interview, Mr. Baldwin said he does not know why a real bullet — which was not even supposed to be on the property — was loaded into the gun. Investigators are trying to determine whether the supplier of blanks and dummy rounds for the movie, Seth Kenney, sent live ammunition as well, according to court documents filed on Tuesday.

There have been some suggestions that there may have been a problem with the gun. The armorer for “Rust,” Hannah Gutierrez-Reed, told a detective that she had loaded it with five dummy rounds before lunch, but that “there was one round that wouldn’t go in,” so she cleaned it out after lunch and added a sixth round, according to an affidavit filed Tuesday.

In the ABC interview, Mr. Baldwin grew visibly emotional as he spoke about Ms. Hutchins, saying “she was someone who was loved by everyone who worked” with her.

“I think back and I think of what could I have done?” Mr. Baldwin said.

This is the first time that Mr. Baldwin has given his full account of what happened to the public. Last month, two crew members who were in the room when the gun went off filed separate lawsuits, naming Mr. Baldwin, the film’s producers and other crew members as defendants. Both lawsuits alleged that Mr. Baldwin should have checked the gun himself to see if it was safe to handle.