As Olympics Near, China Tightens Rules and Athletes Invent Their Own 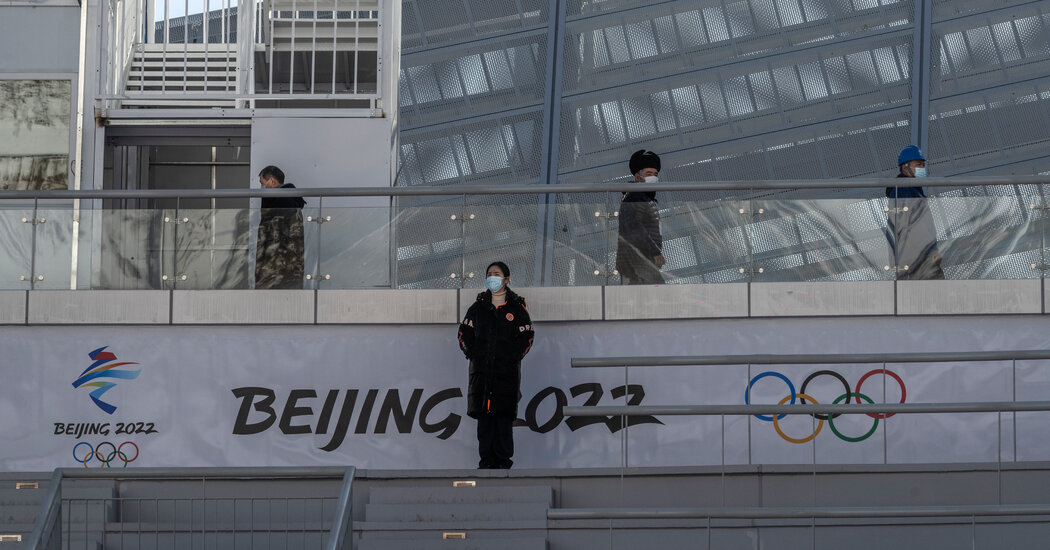 Athletes and sports officials around the world have for months been viewing the approaching Winter Olympics in Beijing, set to take place in February amid a still-raging pandemic, with a mixture of apprehension and weariness. Now, a global surge of cases tied to the highly contagious Omicron variant has given them all the more reason to be on edge.

A single positive test before the opening ceremony on Feb. 4, after all, could derail an athlete’s entire career. An outbreak in China could still derail the entire Games.

“With the new variant being out and about, it’s definitely a little scary,” said Karen Chen, an American figure skater. “I know it’s definitely been going around. All we can do is sanitize our hands, wear a mask and hope for the best.”

China has already announced elaborate precautions to protect against the coronavirus reaching its own population or participants in the Winter Games, and to ensure those two groups have almost no contact with one another. On Thursday, as athletes around the world continued to plot out the safest personal routes to the Games, China detailed some of the strictest rules yet for its own citizens.

Spectators at the Winter Olympics — which were already limited to residents of China — will be allowed to clap, but not shout, in support of athletes. Waiters, cleaners and other support staff will not be allowed to leave Olympic venues to visit their families. And any Olympic participants leaving the vicinity for the rest of China will be required to spend at least one week in quarantine, followed by at least two weeks of isolation at home.

And still, Chinese officials acknowledged they were bracing for the inevitability that some infections will emerge at the Olympics, where everyone will face daily polymerase chain reaction (P.C.R.) tests.

China has barred overseas spectators from entering the country. It is allowing vaccinated foreign athletes, trainers, coaches, referees, journalists and a few others to enter without enduring the usual two or more weeks of quarantine followed by a week of home confinement.

The exemption, however, comes with a stringent requirement that foreigners not leave a “closed loop” of hotels and sports venues, linked by special buses and trains.

“We must never go outside the closed loop, let alone reach the city level — this is our bottom line,” said Huang Chun, deputy director of the Olympic organizing committee’s Office of Epidemic Prevention and Control.

For those outside China, getting to the Olympics in the first place remained the most urgent goal.

Many are now taking proactive measures to keep the virus at bay before their scheduled departures to Beijing. The U.S. Olympic and Paralympic Committee, for instance, has begun strongly encouraging, but not requiring, that its athletes receive booster shots. The British Olympic Association said it was similarly recommending boosters for its athletes “where feasible.” Some teams are going further, specifically telling athletes to try to obtain the Moderna booster after the company announced the results of early studies that appeared to show it was slightly more effective against the Omicron variant. Other studies have suggested those findings are more hopeful than realistic since the Moderna and Pfizer vaccines remain largely unavailable in much of the world.

For many athletes and teams, though, the heartbreak of having years of hard work erased by a positive test on the eve of the Games seemed almost unimaginable. That fear has led to changes large and small.

In the Netherlands, the national speedskating trials — typically a boisterous, multiday affair held in front of tens of thousands of fans — will take place next week behind closed doors amid nationwide lockdowns, with only teams and select members of the news media allowed to enter the rink.

In Austria, a group of American biathletes training at a high-altitude camp in Ramsau am Dachstein has been sending a single staff member out for sporadic visits to the grocery store with a big shopping list containing the athletes’ various requests, as part of an effort to limit potential exposure.

And Olympic hopefuls attending the U.S. figure skating championships next month in Nashville — where masks will be required for fans, but vaccinations will not — are already mapping out plans to avoid risky situations. Madison Hubbell, an American ice dancer, said major figure skating competitions were already infamous for spreading colds and flus. As in previous years, Hubbell will be staying in a rental apartment rather than the team hotel.

“We have our own accommodations that are walking distance that don’t require ground transportation,” she said. “The N95 mask does wonders, and distance does wonders, and we try to take that same policy that we take into the grocery store here and into the airport.”

China has reported dozens of coronavirus cases daily this week. On Thursday, the local authorities locked down Xi’an, a city of 13 million people. At least 242 cases have occurred there in an outbreak this month. Beijing has not divulged how many involve the Omicron variant.

New treatments. The Food and Drug Administration authorized in short succession the first two pill treatments for Covid-19 from Pfizer and Merck. The new drugs, which can be taken at home with a doctor’s prescription, will be available to some Covid patients who are at higher risk of becoming severely ill.

The country has been mostly successful in controlling the virus by quarantining hundreds of close contacts of infected people, and in some cases contacts of contacts. But similarly broad measures at the Olympics could make it hard to hold the Games.

Some precautions are already visible at a ski resort in the mountains near Zhangjiakou, about 100 miles northwest of Beijing, where nearly half of the Olympic events will be held. Thick, clear plastic sheeting from floor to ceiling separates bus drivers from their passengers.

At the resort’s high-speed-rail station, visitors must provide proof of a negative P.C.R. test in the preceding 48 hours. Also required is proof on a smartphone app that the traveler has not visited any Chinese city in the previous two weeks that has had a recent infection.

For construction workers putting the finishing touches on the venues, the authorities already do nucleic acid tests once every three days, Jia Maoting, the general manager of the Olympic Sports Construction and Development Company, told reporters during a visit to the Olympic ski jump venue.

Han, the secretary general of the Olympic organizing committee, cautioned that further measures may be added in the weeks to come. “Everything depends on the changes in the global and Chinese epidemic situation,” he said, “especially the infectiousness of the new mutant strain, Omicron.”

For prospective international attendees, unease about the virus itself has been amplified by uncertainty about the official protocols should they test positive or be identified as a close contact of someone who has.

The National Hockey League this week announced that its players will not participate, a reversal of the league’s earlier position. And Natalie Geisenberger, an Olympic luge champion from Germany, drew attention this month after criticizing the restrictions she experienced during a three-week training trip in China and suggesting she was reconsidering whether she was even willing to travel there again for the Games.

Geisenberger, 33, told a German broadcaster that she was identified as a close contact of someone who had tested positive and was forced to quarantine for several days in her room, despite testing negative herself. She said the food provided for her during her isolation fell short of the standard required for an elite athlete in the midst of training and competition.

“The conditions that we experienced there speak in favor of not necessarily going back there again,” said Geisenberger, who has won four Olympic gold medals in her career.

Others, including Zach Donahue, Hubbell’s skating partner, seemed resigned to the fact that many things would be out of their control, and that going to China to chase an Olympic dream in the middle of a pandemic already meant they were willing to encounter some potentially uncomfortable situations.

“The decision to continue on to the Games means we choose to accept anything that happens due to testing or anything like that,” he said. “We know going into it that it’s high risk. We know going into a grocery store there’s risk. It’s part of the journey.”