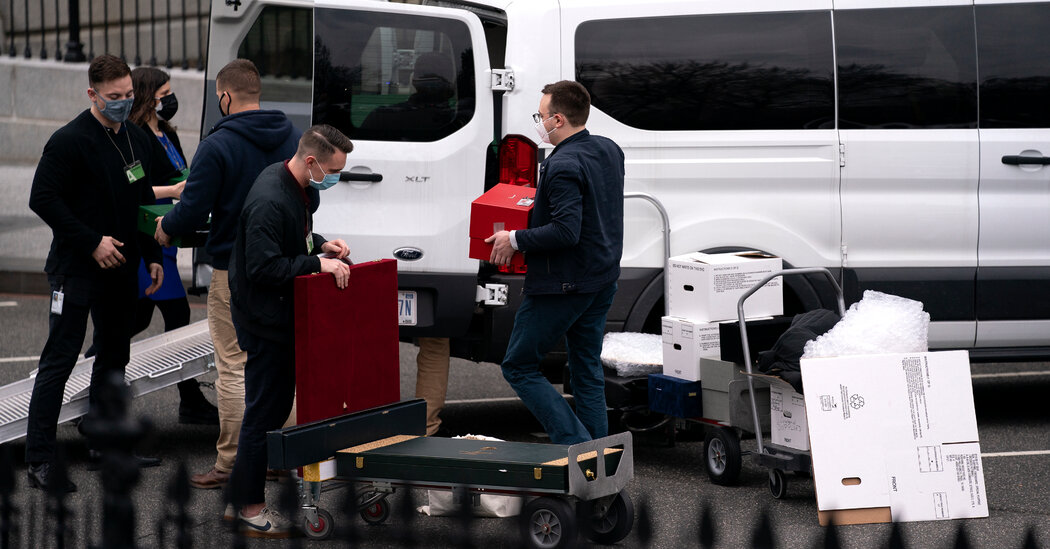 President Biden is opposing another effort by former President Donald J. Trump to withhold information from the House committee investigating the Jan. 6 attack on the Capitol, ordering the National Archives to hand over White House visitor logs the committee is seeking.

In a letter to the National Archives, Mr. Biden’s White House counsel, Dana Remus, said Mr. Biden had rejected Mr. Trump’s claims that the visitor logs were subject to executive privilege and that “in light of the urgency” of the committee’s work, the agency should provide the material to the committee within 15 days.

Mr. Biden had similarly decided last year not to support Mr. Trump’s claim of executive privilege over other batches of White House documents and records sought by the committee. Mr. Trump went to federal court to block the release of those earlier batches but lost.

Citing in part the same reasoning as in the earlier case, Ms. Remus told the National Archives that the documents needed to be disclosed in a timely fashion because “Congress has a compelling need.” She said that “constitutional protections of executive privilege should not be used to shield, from Congress or the public, information that reflects a clear and apparent effort to subvert the Constitution itself.”

It is unclear whether Mr. Trump will go to court again in an attempt to block or slow the release of the visitor logs.

The White House sent the letter to David S. Ferriero, the archivist of the United States, on Tuesday, and planned to inform Mr. Trump’s lawyers on Wednesday morning. The New York Times obtained a copy of the letter.

It is not clear what the visitor logs might show or how extensive and complete they are. In the letter, Ms. Remus said the records in this case “are entries in visitor logs showing appointment information for individuals who were processed to enter the White House complex, including on Jan. 6, 2021.”

Under Mr. Biden and under President Barack Obama, the White House has made its visitor logs public, a move that proponents of government transparency have long said gives the public a greater sense of who has a direct pipeline to the country’s most powerful officials.

But the Trump administration said in April 2017 that such logs should remain secret because of “the grave national security risks and privacy concerns of the hundreds of thousands of visitors annually.” Barring their disclosure made it far harder to determine which donors, lobbyists and activists had access to Mr. Trump and aides.

In her letter to the National Archives, Ms. Remus pointed out that “the majority of the entries over which the former president has asserted executive privilege would be publicly released under” Mr. Biden’s policy.

Committee investigators have made some progress in recent weeks putting together a better portrait of what Mr. Trump was doing inside the White House on Jan. 6, 2021, and who visited with him. In doing so, they have relied in part on lower-level staff members and Trump White House documents. Mr. Trump watched the protests from the West Wing on television, and according to letters released by the committee, initially refused pleas from aides to intervene to stop the crowd.

Through testimony, the committee has learned that White House aides asked one of Mr. Trump’s daughters, Ivanka, “to intervene in an attempt to persuade President Trump to address the ongoing lawlessness and violence on Capitol Hill,” according to a letter the committee sent Ms. Trump last month requesting she sit for questioning.

Key Developments in the Jan. 6 Investigation

The G.O.P. resolution. The Republican National Committee officially declared the Jan. 6 attack on the Capitol “legitimate political discourse,” while censuring Representatives Liz Cheney and Adam Kinzinger for participating in the inquiry into the episode. Mitch McConnell, the Senate minority leader, subsequently spoke against the resolution.

The committee has also been looking more broadly at the efforts undertaken by Mr. Trump and his aides and advisers in the months after Election Day to stave off his defeat, and full access to the visitor logs could provide the committee with further information about who was in the White House during that period.

Many members of the circle of outside advisers who had Mr. Trump’s ear after Election Day spent considerable time at the White House in the days and weeks leading up to the attacks. They include figures like his personal lawyer Rudolph W. Giuliani, who was helping lead the push to challenge the results; the conservative lawyer John Eastman, who was making a case that Vice President Mike Pence could derail congressional certification of the Electoral College results; and the former national security adviser Michael T. Flynn, who was pursuing baseless theories about voting fraud and manipulation of the results.