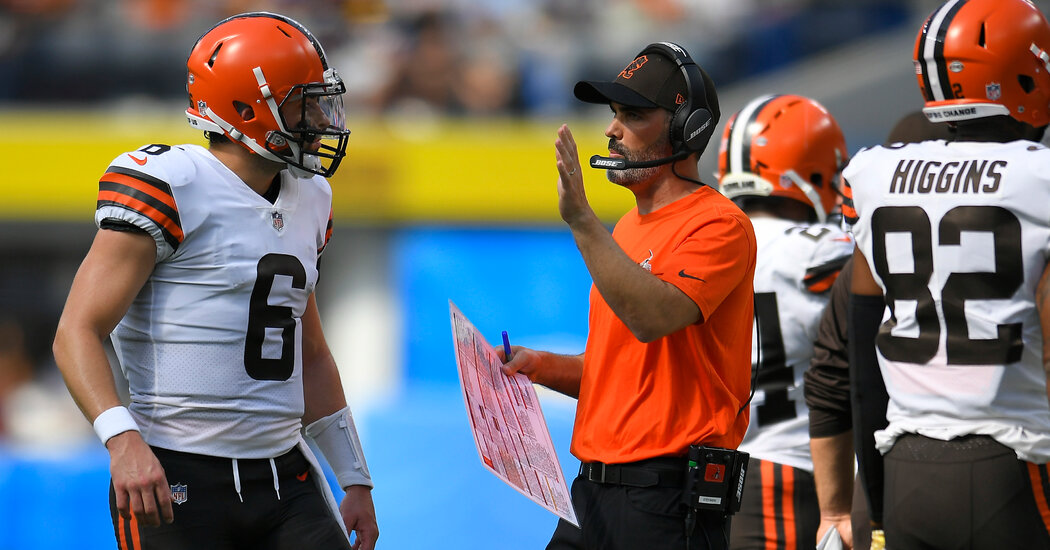 After a single-day high number of confirmed positive coronavirus tests among N.F.L. players on Monday, the spike has hit one team particularly hard. The Cleveland Browns placed 14 players, including quarterback Baker Mayfield, on the Covid-19 list on Tuesday and Wednesday, an outbreak that has threatened the team’s availability for Saturday’s game against the Las Vegas Raiders and highlighted the difficulty of containing the virus while also trying to keep the N.F.L. schedule on track.

The cluster of cases on the Browns is part of a nationwide surge that has also affected N.B.A. and N.H.L. organizations despite their high vaccination rates and has made sports leagues reconsider their protocols. Over 94 percent of N.F.L. players are inoculated, according to the league.

Coach Kevin Stefanski tested positive, the team announced Wednesday, adding that he would work virtually ahead of Cleveland’s game against the Raiders. Under N.F.L. protocols, Stefanski, like all vaccinated players and staff members, can return once he produces two negative tests 24 hours apart and shows no symptoms. If he does not clear protocols before Saturday, the special teams coordinator Mike Priefer will act as head coach for the game.

The Cleveland team entered the league’s enhanced mitigation protocols, which include meetings being conducted remotely and masking being required regardless of vaccination status. Despite the outbreak, an N.F.L. spokesman said, there have been no discussions about postponing Saturday’s game.

The Browns are one of several N.F.L. teams dealing with coronavirus disruptions. Leaguewide, 37 players tested positive for the virus on Monday, the highest tally during the pandemic. That day, the league sent a memo to all 32 teams mandating that essential personnel, including coaches and team staff members who are in regular contact with players, receive booster shots by Dec. 27 or be relegated to noncontact roles. The move is to “ensure that we continue to reduce risk of transmission and allow us to complete the N.F.L. season safely during the pandemic.”

The Los Angeles Rams played Monday night without five players who tested positive on Monday. On Tuesday, they added nine more players to the Covid-19 reserve list. A Washington Football Team staffer reportedly tested positive for the Omicron variant, the first such instance in the league. The Detroit Lions have placed nine players on the Covid-19 reserve list in the past nine days and are also in enhanced mitigation protocols, which include daily testing for all players and mask-wearing guidelines. The N.F.L. has resisted implementing the stricter procedures leaguewide.

In the last off-season, the N.F.L. mandated vaccinations for coaches and essential personnel, saying those who refused would be unable to interact with players. The league stopped short of requiring vaccinations for players, but strongly incentivized it by subjecting players who were not inoculated to stiffer protocols. They are tested every day, as opposed to weekly for those who are vaccinated. Unvaccinated players are also required to wear masks inside team facilities, travel to away games on separate planes and adhere to social-distancing measures in weight rooms.