Coffee or Chai? At 2 Kolkata Cafes, ‘Adda’ Is What’s Really on the Menu 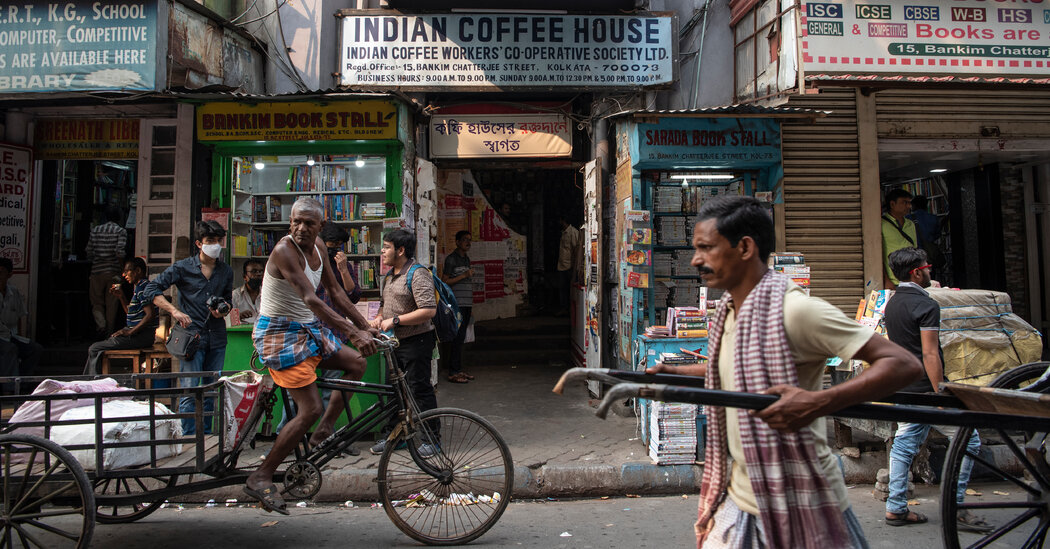 KOLKATA, India — At one of the cafes, to ask for chai is to invite a gaze of withering contempt from the turbaned waiter, as if blasphemy has been committed: It’s called the Indian Coffee House, stupid.

At the other cafe, exclusively chai is served, slow-cooked over coal fire in the same dark kitchen for 103 years with the silent care of performing an old ritual. The history of this place, the Favorite Cabin, is visible in the layers of soot covering the walls, in the arched windows that filter the light in a soft aura of a bygone time, in the little attic overhead that’s an open burial vault for all the chairs broken under some storied customer who got carried away during a passionate debate.

The two cafes, just a five-minute walk apart in central Kolkata, might be distinct in which caffeinated drink they offer. But they are bound by their shared role in fueling a century of political argument, revolutionary plotting and endless gossip in a city at the heart of India’s rich intellectual tradition.

Both are in the College Street area, the bustling neighborhood that is home to some of Asia’s oldest universities. The alleys are jammed with small bookstores, the city’s enormous appetite for knowledge production spilling onto the pavement. On any given day, loudspeakers blare the sounds of protest — by a trade union, a student group or a political party.

Kolkata wears its past on its sleeve like few other cities, from its rotund yellow taxis to its antiquated trams. The two cafes are at once museums to nostalgia, and part of an indispensable, even addictive, daily routine for many.

“I arrange the times of operations in a way that I can make it here,” said Dr. Jayanta Ray, 70, a gynecologist and dedicated Coffee House customer.

Zahid Hussain, the manager, has worked at the cafe for more than three decades. “I have done the A to Z here — everything from serving to cooking,” Mr. Hussain said. “Except for sweeping.”

When the cafe shut for months during India’s two Covid waves, customers like Dr. Ray, who has frequented it for 40 years, itched to get back in.

“His wife kept him under house arrest,” one of his friends joked, “until he got his second vaccine.”

The friends come to the Coffee House to celebrate birthdays, to dissect the latest soccer matches, and even to arrange an annual blood drive on the premises — “highly caffeinated blood,” Dr. Ray joked.

But on most days, customers at both cafes come just to talk for hours about everything and nothing. There is a word in Bengali for that unrestricted conversation: “adda.”

“Adda is something that goes unnoticed — because it’s so part of our every day and it’s so integral to the identity of being a Bengali,” said Dr. Nabamita Das, a professor of sociology at Presidency University in Kolkata who wrote her doctoral thesis on adda. “And when you think about adda you think about adda integrally tied to the space of adda — you talk about the Coffee House adda, the Favorite Cabin adda.”

Some of Bengal’s favorite icons would hold adda at the Coffee House, from the legendary filmmaker Satyajit Ray to Amartya Sen, who won the Nobel in economic science. Many of the city’s intellectual giants have spoken fondly of how the coffee and conversation shaped their worldview, likening each table to its own literary salon.

Among the dozens of paintings hanging crookedly on the Coffee House walls is a life-size portrait of a young Rabindranath Tagore, Bengal’s most famous poet, who overlooks the maroon plastic chairs arranged around the 40 tables. Interspersed among the paintings are “No Smoking Area” signs, which might as well be considered conceptual art in the smoke-filled hall.

“Formally and technically, it’s a no smoking area, but you see cigarette butts all around the floor,” Dr. Das said. “There’s almost like a silent consent among those who serve and those who come to the House to not have ashtrays on the table and yet smoke.”

Balcony seating offers a little privacy for intimate conversations, and a bird’s-eye of the scene below.

“I sometimes sat upstairs and could feel the conversations rise,” Partha Ghose, a physicist and author known for popularizing modern science, wrote in a collection of reflections on the Coffee House.

At the Favorite Cabin, customers pushed their way in even before Sanchay Barua had put away his lunch plate and opened the doors to the cafe started by his grandfather 103 years ago. Ganshan Das, a worker, was boiling the milk over a coal fire in the dark kitchen in the back — the way he has for 51 years.

Half a dozen people, including an author writing his sixth book and a retired economist, had already taken their seats in different corners of the cafe.

As conversation buzzed across the room, the main topic for the divided opinions was the fiercely contested state election, with Prime Minister Narendra Modi’s Bharatiya Janata Party, which governs India, doing all it can to unseat West Bengal’s incumbent leader, Chief Minister Mamata Banerjee.

Earlier in his life, Mr. Barua, 57, had tried his hand at selling stationery supplies, but decided to join the family cafe two decades ago after his father died.

Repeated Covid lockdowns have taken a toll, reducing the operation to one shift a day after lunch. He can’t afford to pay the labor required for longer hours. So for now he and Mr. Das largely run things.

The loss of the cafe would be a blow to the city’s cultural history. Regulars — from independence fighters to writers who shaped influential literary movements to trade union leaders — had their preferred seats and brought their quirks.

The poet and musician Kazi Nazrul Islam had his spot where, at random, he would get the inspiration for his latest composition and begin banging the table top and standing up to sing. The writer Shibram Chakraborty preferred to sit only at the low chairs by the cashier desk, opposite the window.

“If those chairs were taken, he would stand there and wait,” Mr. Barua said. “Or he would leave and come back.”

While many of the customers make their way leisurely between both cafes, some, like Dr. Ray, are purists, their loyalty strictly to one of the cafes, and one of the drinks — even as they insist it is all about the conversation.

Dr. Ray said he had tried the newer, fancier coffee shops that have opened around Kolkata. Did he like their coffee?

There are some who don’t see what all the fuss is about.

Meghna Ghosh and Subrota De, both 20 and former high school classmates catching up after two years apart, decided to check out the Coffee House. They said that while they appreciated its history, the menu didn’t do much for them. Neither did the vibe.

Compared with the new coffee shops around town, which Ms. Ghosh said were “good for Instagram,” the Coffee House was — and here she struggled a bit to express her thoughts.

Mr. Hussain, the manager, is just as skeptical of the young people who walk through his doors these days.

“In the past, the students would come to spend time with their books. Now they all come for love — for dates,” he said, his old-uncle energy coming out.

Then, he saw the bright side.

“A lot of love started here,” he smiled. “And they come back to us with sweets when they get married.”