Dance Class Is in Session: Flail, Get Weird, Unlock Yourself 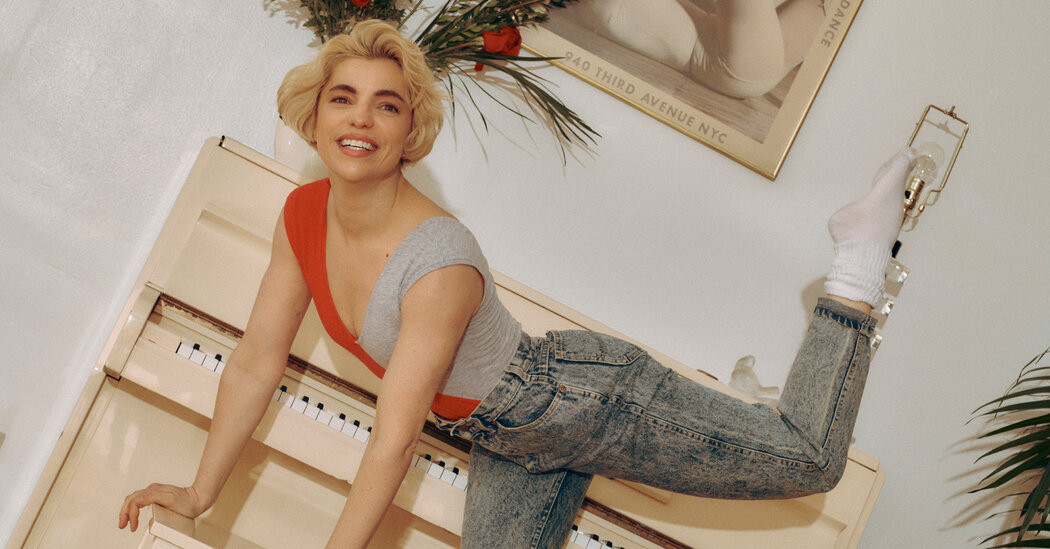 It was a Sunday, and Trimbur, a dancer and choreographer in a Jane Fonda-worthy ’80s leotard, was leading a class in a midtown Manhattan studio. Nearly 50 people were lured in by her pitch: an afternoon twirled away in unserious but very intentional movement. The goal, Trimbur said, was to attain the effervescence of children putting on a backyard dance show.

“We’re equal, we’re 13, and we’re just going to do some silly choreography to show our parents before dinner,” she said. “That’s the vibe.”

To loosen inhibitions, Trimbur suggested some screaming. And hugging a stranger. Dancers — clad in everything from ballet slippers with ripped tights to Converse and kneepads — were instructed to run across the room, wail in one another’s faces, then embrace. I joined in: It felt great and powerful and properly ridiculous. The energy was equal parts eighth-grade gym class and righteous affirmation.

Then came the routine, to a synthy 1986 cover of “You Keep Me Hangin’ On.” “I don’t do counts,” Trimbur said, directing us to slap our bottoms, roll on the ground, switch-kick, punch and spin. Her references were less Balanchine and more “Ace Ventura: Pet Detective” — she choreographs for faces, too. “F.Y.I. flailing about wildly IS dancing,” she wrote in her newsletter.

The kind of intuitive movement Trimbur champions, low-stakes and accessible, found a new audience during the pandemic, as dancers and dance teachers migrated online. Ryan Heffington — the pop choreographer whose Los Angeles studio, the Sweat Spot, helped a “come one, come all” dance culture blossom there — had tens of thousands of followers (Trimbur among them) in his Instagram Live sessions during early lockdown. Even eminences like Debbie Allen two-stepped for the feed, finding an unexpected communion, though everyone was literally dancing on their own.

Among this blossoming crop of teachers and influencers, and the legions of creators making their moves into memes on TikTok, Trimbur, 40, stands out. Underpinned by an intimate, self-revealing aesthetic, she fluidly navigates from sweaty group class to phone screen to ambitious project — dance is her public palliative for physical and emotional upheaval. And yet, she makes it fun.

“With her, it’s really the endorphins, the feeling that you’re in love, kind of, that she can generate,” said the filmmaker Miranda July, a friend and collaborator. Evan Rachel Wood, another friend and creative partner, trusts her implicitly: “I would privately make my own dance videos and edit them and play around,” she said, “but I would never show anybody — except Angela, because that’s the energy that Angela brings. It’s about authenticity.”

A short, lavish-looking dance film, “Unauthorized,” that Trimbur choreographed and Wood directed, yet to be released, is set to songs from Fiona Apple’s 2020 album “Fetch the Bolt Cutters.” In solos and with other artists, some traditional dance stars and some not, Trimbur leads in scenes across the Los Angeles cityscape and its dusty barrens. It starts off moving with sweet musical precision and turns into something more wild, womanly and beautiful, needling into male-female power dynamics and rebirth. Wood and Trimbur made it as a way to cope with the pandemic and other struggles, they said.

Trimbur’s work is full of empathy for people who, like her, are striving, July said. “All they have is their own bodies, which don’t work perfectly and might be failing them in a million different ways, and still they’re alive, and she’s alive, and that’s what the dance is about — that’s all right there with her.”

That she unspools all her ups and downs on Instagram has endeared her to almost 100,000 followers. In the pandemic-born social-media dance boom, even established artists found new footing. Though Heffington is commercially successful and spent a decade growing Sweat Spot (it closed during the pandemic), he said the overwhelming, global response to SweatFest, his Instagram series, changed his life. It redefined for him what was possible in ridding dance of its intimidation factor, pivoting it away from perfection and helping his followers find the joy. (It also raised substantial money for charity.)

“It’s not about how high you kick, your flexibility — none of these traditional rules or metrics matter, in this new wave of thinking and including people,” Heffington, who planned to quietly start teaching in person again this month, said in a phone interview. “It’s just because you want to do it; that’s enough. Let’s lower the bar — let’s bury that bar — and allow everyone to come and just participate.”

In Los Angeles, where she lived until late last year, Trimbur had built a reputation as a community dance maven, hosting “Slightly Guided Dance Parties” at the Geffen Contemporary at the Museum of Contemporary Art, and conjuring viral dance videos even pre-TikTok. (She’s also an actress, most recently playing a roller-skating influencer on “Search Party,” the HBO Max dark comedy.) She created and for six years led a women’s dance squad that performed at local basketball games and inspired fierce devotion among its fans and members.

That crew and other friends enveloped her when, in 2018, she was diagnosed with breast cancer and underwent a mastectomy, chemotherapy, and then six reconstruction and related surgeries. She documented her treatment online, becoming an advocate for other cancer patients, and setting up a support network through the video-messaging app Marco Polo (about 500 people joined, she said).

During the pandemic, the dance squad dissolved. And after a “Search Party” shoot last summer made Trimbur fall in love with Brooklyn — “I’ve never felt this alive, you know? New York is magical” — she packed up 15 years of her West Coast life and her two pet cockatiels, and moved. Now she is reigniting her career here, from a Bushwick loft that she is decorating in high gloss black-and-white to resemble an ’80s nightclub. There are multiple disco balls, 1981 Vogue magazines fanned out atop a panther coffee table, and a boxy white TV/VCR that had been in her childhood bedroom. When I met her at home for an interview, she popped in a VHS of “Dirty Dancing.”

She choreographs in the studio-style mirrors she had installed, and teaches a Zoom dance-fitness class — lately called “apathetic aerobics,” for when you can’t manage the regular high-pitched workout zeal. (It’s set to emo.)

Trimbur is also developing a TV show about her life for a cable network, she said, with July as a producer. They met when July cast her as a YouTube dancer in her 2011 film “The Future”; later, they discovered a mutual affinity for estate sales, and started surreptitiously recording improvised scenes there.

“She’s a really special combination of innocent and blunt,” July said. “Sometimes she’ll say something and I’ll just want to write it down, because it’s perfectly put, but not the therapy version of it, which is sort of rare these days.”

Trimbur grew up outside Philadelphia, where her mother ran a dance studio — “When she picked up the phone, it would be like, ‘Pitter Patter Dance Studio, where everyone’s a star!’” Trimbur and her sister, Colleen, were its exemplary pupils, learning all the routines. But when Trimbur was around 12, her mother became a Jehovah’s Witness, closed the studio and pulled her children out of school. Trimbur’s formal dance education largely ended then, but she spent hours at home, filming herself dancing — just as she does now.

“The way that I like to think about dance is the version of myself that’s, like, stuck inside in my living room, just dancing to Mariah Carey,” she said. “That’s what brings me joy, to just be free and not think about what’s the right step.” Still, New York’s multifaceted dance scene brings new possibilities, and Trimbur is already envisioning taking Broadway-style classes and staging adult recitals at school auditoriums. (A Valentine’s Day couples dance event she organized for the Bell House in Brooklyn quickly sold out.)

Dancing through and after cancer has been its own revelation. Hosting the “Slightly Guided Dance Parties” during chemo, she sometimes had to step offstage to regain her energy, she said, but she didn’t regret the gig. Dancing, she said, “is the way that I talk to myself.” She and Wood made the Fiona Apple short just before she got her breast implants removed; as a dancer, Trimbur said, “they just felt like stapled Tupperware.” As part of treatment, she also had her ovaries removed, so the film is an emotional memento, one of her last instances of performing with her old body.

“It was palpable watching Angela dance — I fully understood that that is how she processes things,” Wood said.

Trimbur begins her in-person classes with students in a fetal position for a womb-like meditation, followed by a close listen of, say, Christina Aguilera’s “Beautiful.” It’s not uncommon for people to cry, she said.

She wants to unlock them from those emotions when they begin to wiggle up: “Get weirder, girls, get weirder!” she extolled, in the class I attended.

In another class, she instructed, “there’s a part in the song where you’re going to throw yourself on the floor like a toddler” having a tantrum — “but the face is cute.”

“I want to be able to just make people laugh through dance without it being too, like, honk, honk,” she told me, mimicking a schlocky comedian with an airhorn. There was a sense of gleeful abandon in that Manhattan studio — I’ve rarely seen so many students smiling in between reps — as the shrieks mixed with giggles.

Her New York dancers are already hooked. “It’s like church,” said Chelsy Mitchell, 32, a dance newbie who has been coming weekly since Trimbur started her Sunday classes, traveling an hour-and-a-half one way from her home upstate. “Dance therapy.”

Catherine McCafferty, a 20-something comedian and actor, had the weight of 18 years of ballet and other dance training when she stepped into Trimbur’s studio for the first time that afternoon. She’d come because she liked what she saw on Instagram, but she was also new to New York and nervous that she wouldn’t measure up. Instead of feeling judged, she felt released. “The only eyes that are on you are a bunch of other people who want you to shine,” she said.

For Trimbur, that atmosphere of validation is paramount. “I get so frustrated when somebody says something like, ‘I can’t dance,’ or they say, ‘I’m the worst one’ or ‘no one wants to see me do that,’” she said. “It’s so sad because I know, scientifically, how happy you could be, if you gave yourself permission to move.”