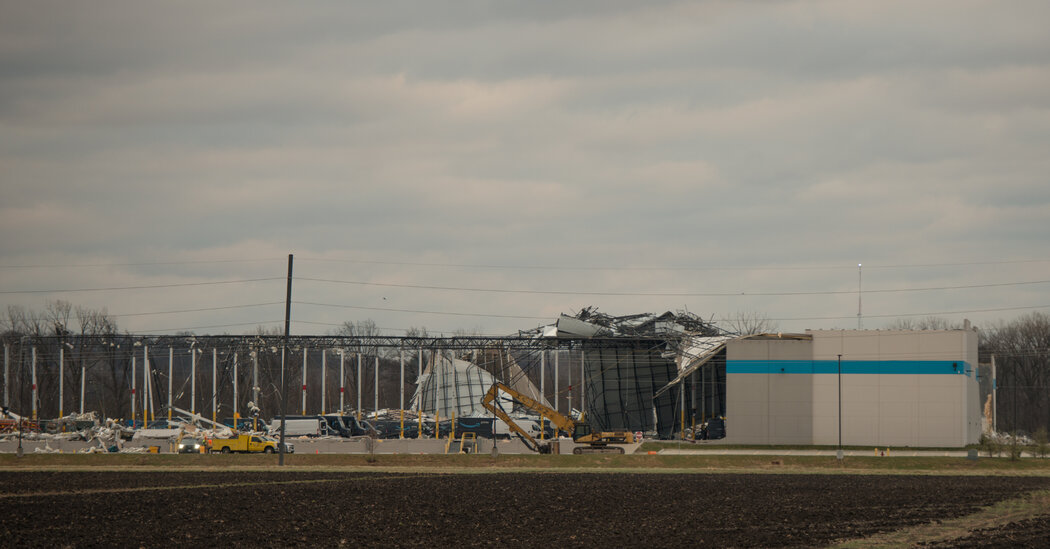 Moments after Mr. Harris entered the shelter, there was a “loud roaring noise” and the building started to shake, he said.

“I felt like the floor was coming off the ground,” he said. “I felt the wind blowing and saw debris flying everywhere, and people started screaming and hollering and the lights went out.”

Mr. Harris likened the sensation to earthquakes in California, where he grew up. “When the ground was shaking, that’s what it felt like,” he said. “I’m not afraid of nothing, but that was scary.”

On Saturday morning, workers appeared to be using a crane to clear wreckage from the site. Heavy machinery was brought in to move the collapsed walls, and rescue teams were checking inside vehicles that had been crushed by the walls.

“We’re deeply saddened by the news that members of our Amazon family passed away as a result of the storm in Edwardsville, Ill.,” Kelly Nantel, an Amazon spokeswoman, said in a statement on Saturday. “Our thoughts and prayers are with the victims, their loved ones and everyone impacted by the tornado.”

Amazon opened two warehouses in Edwardsville in 2016, employing about 2,200 people, The St. Louis Post-Dispatch reported in 2017.

When Amazon opened the facilities, “it put us on the map,” Walter Williams, the economic development coordinator for Madison County, which includes Edwardsville, said on Saturday. “When more people saw Amazon here, they started saying, ‘We need to look there.’”