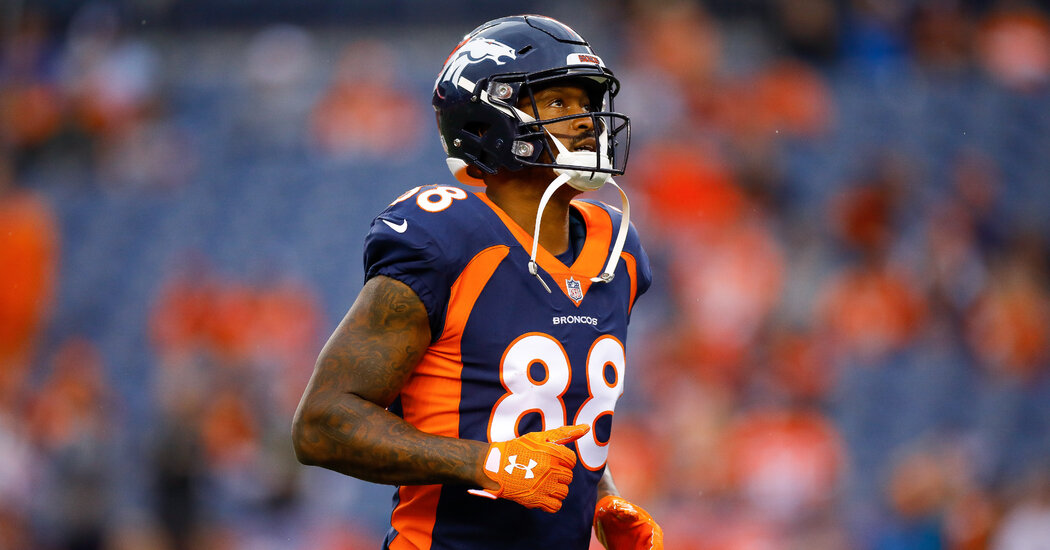 Demaryius Thomas, a former star wide receiver for the Denver Broncos who played for the National Football League for 10 seasons before retiring in June, died at his home in Roswell, Ga., on Thursday. He was 33.

His death was confirmed by a spokesman for the Roswell Police Department, who said in an email, “Preliminary information is that his death stems from a medical issue.”

The N.F.L. described Mr. Thomas as a “standout” player. He played with the league for a decade, primarily with the Broncos, where he was a five-time Pro Bowler. In 2016, Mr. Thomas helped lead the Broncos to an unexpected victory against the Carolina Panthers in the 50th Super Bowl. In a statement, the Broncos said he “established himself as a dominant record-setting wide receiver who was an instrumental part of two championship runs and our victory in Super Bowl 50.”

Mr. Thomas was selected among the Top 100 N.F.L. players four times and was the Broncos’ second-leading receiver. He was traded to the Houston Texans during the 2018 season and later moved to the New York Jets before ending his career. By then, he had caught 724 passes for 9,763 yards and 63 touchdowns.

In 2015, President Barack Obama commuted his mother’s sentence. She later wrote about expressing regret for the crime and seeking freedom for her mother, who was still in prison. “Because I refused to testify against my mother,” she wrote, “I received a 20-year mandatory sentence because I did not give ‘substantial assistance’ to the prosecution.”

The following year, Mr. Thomas met the president at the White House, according to the Broncos’ website. “We talked for a quick second,” he said. “I told him, ‘Thank you for what you’ve done for my family,’ for giving my mother clemency.”

In 2016, Mr. Obama commuted the sentence for Mr. Thomas’s grandmother, after she had spent 16 years in federal prison. Mr. Thomas said at the time: “This was a blindside shot, but I’m happy. I’m excited. The past two years, I got my grandmother and my mother out. And a lot of other people got their family members out that didn’t do crazy crimes, so it’s a blessing.”

Jeff Clayton, who coached Mr. Thomas when he was a student at West Laurens High School in Dexter, Ga., said in an interview that as a teenager, Mr. Thomas had showed talent both as a football and a basketball player, but that he “didn’t want to be in the spotlight.”

Later in his career, Mr. Thomas would return to the high school to visit students, Mr. Clayton said. “Everybody would gravitate towards him,” he recalled. But “he never really changed from that humble little kid,” he added.

Mr. Thomas attended Georgia Tech, where he was drafted by the Broncos as the 22nd pick.

In June, when he announced his retirement in a video posted on the Broncos’ Twitter feed, he said: “I’m going to retire a Denver Bronco. I’m honored; I’m grateful; I’m appreciative.”

In the video, Mr. Thomas recalled his first touchdown with the N.F.L.

“Every time I see it, every time I watch it, I still get the chills,” he said, adding, “I’m just happy to say I’m done and it did me well.”