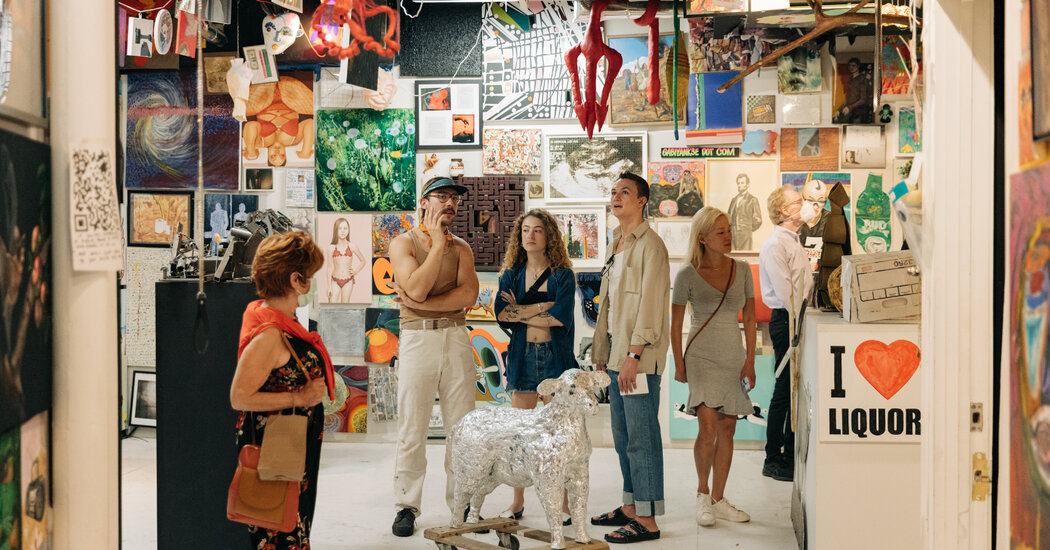 By 8:30 p.m. last Thursday night, just a half-hour after it opened, the line to get into “The Patriot,” an unclassifiable and, frankly, deranged group exhibition at the gallery O’Flaherty’s at 55 Avenue C had stretched around the corner down East 4th Street and was flirting with Avenue B. By the time the New York Police Department arrived, with at least a dozen officers and several patrol cars, rough estimates placed the crowd somewhere near 1,000 people, and it was totally conceivable that many of them were waiting to see their own work.

About four weeks ago the gallery issued a democratic open call: no work under three-feet square turned away. It was answered exuberantly. By last count, the show features 820 pieces of art crammed into the gallery’s modest storefront space, most hung salon-style with impressively little breathing room, but also creeping onto the ceiling, splayed on the floor and colonizing the bathroom.

In the New York art world, the summer group show is traditionally a polite, low-impact affair of loosely related work under a minimally taxing conceit. It’s a placeholder, really, until the collector class returns from Amagansett — “the most disappointing show for an artist to be in,” as the show’s printed statement correctly identifies.

“The Patriot” is not polite. In its rabid excess, it pushes the summer group show to its absurdist breaking point. It is, by turns, hysterical, profane, unsanitary, obnoxious and vaguely disquieting. It’s also a lot of fun. Given the volume, it is predictably not all good, and some is actively repulsive (“I mean, like what is this?” asked the painter Jamian Juliano-Villani, who runs the gallery with the artist Billy Grant and the musician Ruby Zarsky, pointing at what appeared to be a herring filet rotting in a plastic sandwich bag tacked to a door).

Seemingly every conceivable and inconceivable media is represented: paint of course, but also synthetic wig hair, busted hockey sticks, insulation foam, needlepoint, hubcaps, brasserie menus. An accurately scaled sheep fashioned from tin foil and left on a dolly — a good sight gag — roams around the main floor. Any kind of cogent curatorial principle is beside the point, which is to try to do something interesting, rather than simply move product.

Contextless does not mean without pretension. “The Patriot” becomes its own kind of conceptual artwork. “Everyone thinks they have an original idea, but there are 10,000 of the same painting,” Juliano-Villani said. True enough, themes emerge: overworked muddy oil paintings; sex toys as ready-mades; post-ironic obsession with celebrity (a drawing of the famous paparazzi image of Jake Gyllenhaal glumly feeding Kirsten Dunst soup sticks out).

If the overall effect is that of a Cooper Union thesis show on psilocybin, it exposes, probably inadvertently, the deep and teeming desire among the city’s artists clamoring for exposure and desperate for recognition, and the difficulty in securing commissions and representation. The show is a microcosm of the art scene in all its frustrated expression: art school dropouts, first-timers, artists long-suffering in obscurity, the wildly famous. It presents a kind of alternative Whitney Biennial (most work was submitted by local artists, but some from as far as Virginia and Vermont). In terms of excavating the depraved heart of American art production, it’s in many ways more effective.

While the thrill felt by a struggling artist securing their first group show must surely be real — and alongside established artists like Josh Smith, no less, who has previously filled commissions for Louis Vuitton, and who here contributes a Rauschenbergian cigar box with razor blades affixed by chewing gum — it will not figure as anyone’s big break or burnish a C.V. If the show uses them as props, none of them seem to mind.

When I returned the day after the opening, the scene was much more civilized. A handful of people wandered around, sharing what looked like the same stunned expression of sensory overload. An artist was tending to a kinetic sculpture set on the floor, a complex network of silicone skin pumping and recycling what looked like blood from two gallon-size jars. A gallery assistant asked about the probability of it exploding. It wasn’t out of the question.

It was impossible to determine if a plastic shopping bag left in the middle of the main floor was or wasn’t an actual piece of art, but it may as well have been (it was later retrieved by a visitor, but a similar one could be found strung up in the office, where a series of flashing video works on tiny screens blink like a miniature Shinjuku district). Occasionally the entire gallery groans, signaling a visitor has tripped the vibrating underfloor in a side room housing a vitrine filled with what’s billed as Abraham Lincoln’s death pillow on loan from the Morgan Library and Museum. (Juliano-Villani: “Billy used to date someone there who owed him a favor”; a spokeswoman for the Morgan, of course, said the object had never been in its collection nor had the museum lent any objects to the exhibition.)

In fact the number of established artists who elected to be involved can be surprising. You can attempt to locate, for example, work by Jonas Wood, Terence Koh, Jordan Wolfson, Rob Pruitt and Sarah Morris. Cecily Brown offered a halfhearted canvas (mounted near a jar of Eurocrem, Serbia’s answer to Nutella). Lipstick marks on the underside of the toilet-seat lid in the bathroom are credited to Dan Colen. A shadow sculpture by the British duo Tim Noble and Sue Webster sits on a plinth and probably looked better during the opening, when the gallery’s lights were shut off and visitors were given flashlights to spelunk in the dark. For better or worse, there are no aesthetic judgments, which, Juliano-Villani said, is “the perfect way to annihilate any kind of art scene.”

There’s a giddy embrace of chaos that used to define the downtown scene but has mostly been absent lately, zapped by self-conscious appraisals of taste and smoothed over by the uniform gloss of social media and expansionism. In all its drippy humanity, “The Patriot” is the very opposite of a sterile concrete sales floor. Still, like everything that functions or doesn’t in New York City, “The Patriot” has a real estate component. On view through Aug. 10, it stands to be the gallery’s last show in this space. The gallerists said their landlord, less enamored with their anarchic spirit, is pushing them out, and the exhibition is a kind of going-away present in the form of nearly 1,000 holes in the walls, a final punk gesture befitting their surroundings.

Avenue C has mostly remained unbothered by the slickness that has overtaken other parts of the city. It’s only a few minutes in any direction to the art-dealing precincts of west Chelsea or TriBeCa, but psychically, it may as well be on the moon. When O’Flaherty’s opened last year, Juliano-Villani, who was feeling stymied by the demands of the market, described her desire “to show art that is not afraid of itself.” In the window, a neon sign in putrid green asks “What’s wrong?” — a question that teases the goings-on inside, but which could also reasonably be posed to the rest of the art world at large, and probably should.