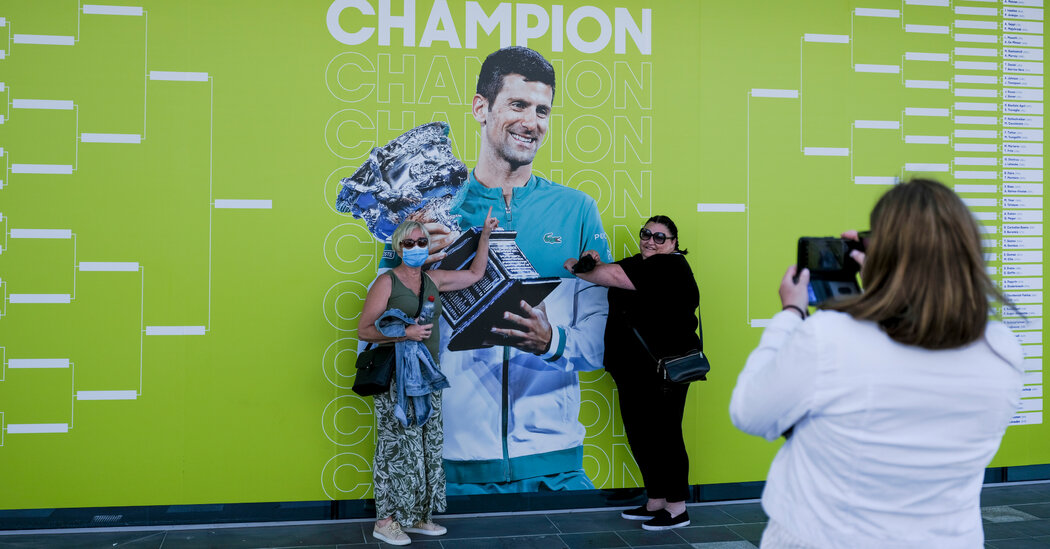 It should not come as a revelation at this stage, but Novak Djokovic is not backing down.

Not after all the drains on his energy and blows to his image. Not after twice being detained in Melbourne, Australia, last month. Not after his deportation from that country on the eve of the year’s first Grand Slam tournament. Not after being forced to watch from afar as his longtime rival Rafael Nadal took the career lead with a 21st major men’s singles title.

For now, Djokovic will still not get vaccinated against the coronavirus, no matter how much it costs him, as he made clear in an interview with the BBC that was broadcast on Tuesday and in which the interviewer, Amol Rajan, summed up a fair share of the global mood by abandoning journalistic sang-froid and imploring: “Why Novak, why, why?”

“Because the principles of decision-making on my body are more important than any title or anything else,” Djokovic answered. “I’m trying to be in tune with my body as much as I possibly can.”

That approach has him out of tune with his sport and his times. According to the ATP, the men’s tennis tour, he is the only one of the top 100 ranked men’s singles players who has not been vaccinated against Covid-19. In an international sport that often requires players to cross borders on a weekly basis, his freedom of movement and access to tournaments will be limited depending on local pandemic restrictions.

That cannot be easy for a self-described libertarian, but this is Djokovic’s choice, pure and simple, even if it resonates far beyond his personal space.

Though he plans to return to action for the ATP event in Dubai next week, his status as an unvaccinated foreigner means he will not be permitted to enter the United States to take part in the top-tier tournaments next month in Indian Wells, Calif., and in Miami unless he is granted an exemption. That is considered unlikely based on the criteria, which does not include a prior coronavirus infection.

Djokovic, who was infected with the coronavirus in 2020, reported testing positive again in Serbia on Dec. 16, 2021, which was the basis for his decision to travel to Melbourne for the Australian Open with what he believed to be a valid exemption from the country’s requirements for entry. Instead, he was deported after being detained and losing his final appeal, with the Australian government arguing successfully that his presence could risk promoting anti-vaccine sentiment in the country.

Djokovic said he “completely disagreed” with that decision, but unless the rules in France change, Djokovic will not be allowed to play in the next Grand Slam tournament, the French Open, which begins in May. He also may not be allowed to participate in the Monte Carlo Open in April in the tax haven on the French Riviera, where he officially resides. Beginning Tuesday, the French government, which requires a vaccine passport for access to sports venues and other public facilities, will only allow a four-month grace period for those who have been infected but are unvaccinated. His grace period would expire in April.

But Djokovic, still the world No. 1 in men’s singles, calmly said on Tuesday that he was ready to accept the consequences, even if it meant that it denied him the chance to win the race to be considered the greatest of all time.

“That is the price I’m willing to pay,” he said.

It is unclear how high that price will be. He will still have access to numerous tournaments. The men’s tour strongly encourages vaccination but has not mandated it. National regulations are shifting rapidly. Today’s closed border could be open in a few months, or even a few weeks. France has a presidential election this spring that could lead to a change in government and coronavirus policy and perhaps fling open the gates to Roland Garros.

Djokovic reserves the right to change his mind on vaccination, but for now his approach does put him at a competitive disadvantage and will likely cost him the No. 1 ranking in the coming weeks as Daniil Medvedev of Russia closes in.

Djokovic holds the men’s record for total weeks at No. 1 at 360 (and counting). He is the only man to have won the nine Masters 1000 events and he has won them twice. He also holds a head-to-head edge over his biggest rivals: Nadal and Roger Federer.

But the overall Grand Slam record is what glitters most brightly at this stage, and Nadal has 21 major singles titles to Djokovic’s and Federer’s 20. Djokovic is the defending champion at the French Open but if he is unable to play, Nadal will be an even bigger favorite after winning it an astonishing 13 times already.

Djokovic should have access to Wimbledon unless Britain’s coronavirus policy changes. He has been the most successful grass-court player in recent years, winning at the All England Club six times. But playing in the U.S. Open, the year’s final Grand Slam tournament, will be problematic with the United States’ ban on unvaccinated foreigners.

“The United States Tennis Association and the U.S. Open will welcome all players who abide by the guidelines put forth by the U.S. government, by the City of New York and by the tournament,” said Chris Widmaier, a spokesman for the U.S.T.A., on Tuesday.

Missing three of the four majors in one season would be quite a blow to Djokovic’s quest to finish atop the Grand Slam count. After being deported last month, he is also banned for three years from visiting Australia, although Australian government officials have indicated that this ban could be rescinded.

Djokovic also must deal with the shifting landscape in men’s tennis. A younger generation of talented and powerful players is rising, including Medvedev, Alexander Zverev, Matteo Berrettini, Stefanos Tsitsipas and Felix Auger-Aliassime.

At 34, Djokovic will need to remain sharp to stay on the cutting edge but Nadal, 35, and Federer, 40, already have proven that it is possible to win majors at advanced ages for tennis.

Djokovic has polarized opinion like neither of his rivals, however. Though he reaffirmed on Tuesday that he does not want to be associated with the anti-vaccine movement, his high profile and the wall-to-wall coverage of the Australian fiasco have guaranteed quite the contrary.

“It’s really unfortunate there has been this kind of misconception and wrong conclusion that has been made around the world based upon something I completely disagree with,” he said.

If so, it would certainly have helped if he had made that clear long ago instead of dodging the subject and questions about his vaccination status. His decision to speak with the BBC seemed an admission that his prior approach had created too much ambiguity. He talked about feeling wounded by the “looks” from his fellow players in Melbourne after he won his initial appeal and practiced on site ahead of the tournament.

But then for a man who speaks six languages, Djokovic has long had a communication problem. He has a restless spirit and intellect and has sometimes been his own worst enemy: making choices that backfire, like knocking himself out of the 2020 U.S. Open by inadvertently striking a lineswoman in the throat with a ball that he had whacked in frustration.

It was not the first time that Djokovic had angrily struck a ball. But though his aim and judgment have failed him rather too often, he is one of the most resilient of modern champions, emerging from wartime Serbia to break up the Federer-Nadal duopoly. He bounced back from an extended slump and a lingering elbow injury to dominate again in 2018. He rebounded from that U.S. Open misadventure in 2020 to come within one match of a true Grand Slam in 2021.

He has overcome many obstacles, some of his own creation, during his long and phenomenal run atop men’s tennis, but this is new territory. To bounce back again and rejoin the historical chase, he must first be able to compete.