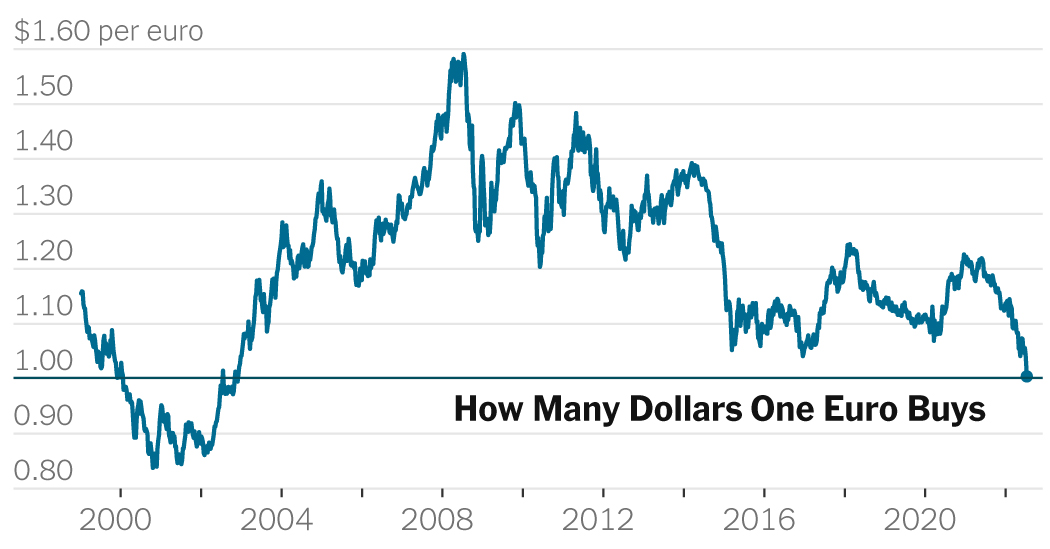 With a war on the eurozone’s border, an uncertain energy supply from Russia and a growing risk of recession, the pressures bearing down on the euro finally grew so strong that on Wednesday it dipped to parity with the U.S. dollar — a one-to-one exchange rate.

It’s a sight unseen since December 2002, in the early years of the currency’s existence. The aesthetically pleasing round number has become a focal point for investors.

In foreign-exchange markets, “1.00 is probably the biggest psychological level around,” analysts at the Dutch bank ING said in a note to clients.

Even more remarkable than breaching this level is how quickly the euro has dropped against the dollar. The currency, shared by 19 European countries, has slumped more than 11 percent this year, as the dollar’s strength has been almost unmatched.

The euro’s sharp decline has come as the dollar, for generations one of the safest places to park money, has strengthened against almost every major currency in the world.

Currencies move like stocks, bonds or any other asset — investors can buy them directly when they think they will grow in value, and sell when they think they will decline. They also reflect global demand for a country’s assets in general, because buying U.S. government bonds or Apple stock requires getting dollars first, and lots of global trading takes place in dollars. So, as often happens in times of economic distress, people looking for a safe place to put their money have bought more dollars, at the expense of other currencies like the euro.

The euro was introduced in 1999 after decades of discussion and planning, with the intention of bringing unity, prosperity and stability to the continent. After two major wars in the first half of the 20th century, the argument for the euro and the broader European project was that common institutions would reduce the risk of war and crisis and provide diplomatic arenas for conflict resolution. The euro was a critical symbol of this unity.

But like all currencies, the euro is only as strong as people’s belief in it. That was seriously tested about a decade ago when investors fled from the debt of heavily indebted nations and bailouts led to fights about fiscal policy. The crisis threatened the future of the currency, but faith has mostly been restored. The eurozone, which began with 11 countries, will welcome its 20th member next year.

In recent months, though, a vast number of factors have been mounting against the euro and in favor of the U.S. dollar, which has reasserted itself as a haven during economic upheaval.

8 Signs That the Economy Is Losing Steam

Worrying outlook. Amid persistently high inflation, rising consumer prices and declining spending, the American economy is showing clear signs of slowing down, fueling concerns about a potential recession. Here are other eight measures signaling trouble ahead:

Consumer confidence. In June, the University of Michigan’s survey of consumer sentiment hit its lowest level in its 70-year history, with nearly half of respondents saying inflation is eroding their standard of living.

The housing market. Demand for real estate has decreased, and construction of new homes is slowing. These trends could continue as interest rates rise, and real estate companies, including Compass and Redfin, have laid off employees in anticipation of a downturn in the housing market.

Copper. A commodity seen by analysts as a measure of sentiment about the global economy — because of its widespread use in buildings, cars and other products — copper is down more than 20 percent since January, hitting a 17-month low on July 1.

Oil. Crude prices are up this year, in part because of supply constraints resulting from Russia’s invasion of Ukraine, but they have recently started to waver as investors worry about growth.

The bond market. Long-term interest rates in government bonds have fallen below short-term rates, an unusual occurrence that traders call a yield-curve inversion. It suggests that bond investors are expecting an economic slowdown.

Globally, supply chains have been disrupted by the pandemic and the war in Ukraine. Since Russia’s invasion in February, the prices of essential commodities including oil, natural gas, wheat and fertilizer have soared, pushing up food and energy prices around the world. That has led to the highest inflation rates in decades.

Now central bankers in the United States and Europe have committed to bringing down inflation through higher interest rates, even as the global economic outlook deteriorates. The risk of recession has been worsened by restrictions on Chinese production because of Covid-19 rules, while efforts to wean Europe from Russian energy are proving difficult to accomplish. These trends have made the dollar stronger while offering little to help the euro.

“The outlook remains very supportive for the dollar,” said Ebrahim Rahbari, the global head of foreign-exchange analysis at Citi.

The euro’s fall has amplified concerns that the eurozone would fall into recession.

Last week, uncertainty about the future of Europe’s energy supply and growing concerns that Russia would permanently shut down a critical natural-gas pipeline to Germany pushed the euro to its lowest level in 20 years.

But the bets on parity started piling up months ago. Since April, Jordan Rochester, a strategist at the Japanese bank Nomura, had been betting that the euro would reach parity with the dollar. Similar predictions followed, including at JPMorgan Chase and HSBC.

Then came a brief respite in the euro’s slide. Among other things, the European Central Bank’s president, Christine Lagarde, laid out a clear plan to raise interest rates for the first time in more than a decade in July and signaled that the eight-year era of negative interest rates would be over by early fall. Since then, policymakers have amped up their commitment, saying that when rates increase again in September, the jump will probably be even bigger than in July.

Ultimately, it wasn’t enough to turn the trajectory of the currency around. “It is hard to find much positive to say” about the euro, analysts at HSBC wrote in a note to clients in early July. “The economic news is very challenging.”

Around the same time, Mr. Rochester of Nomura said he expected the euro to reach parity with the dollar by the end of August. In the end, it happened much more swiftly.

“It’s very much human psychology,” Mr. Rochester said. There’s not a market-based reason that parity is important — “it’s just a round number,” he added. But it could be the beginning of a period similar to the currency’s early years, when trading ranged from 82 U.S. cents to 1 dollar against the euro.

Back then in the early 2000s, before the euro existed in the form of bank notes and coins and was just a virtual currency, the low exchange rate undercut confidence in the new currency. The European Central Bank even intervened to try to bolster it.

Today, there are fewer questions about the resilience of the euro as progress has been made in firming up the union. The commitment of the central bank to preserve the currency a decade ago hasn’t been significantly tested since.

But the weaker currency poses an extra headache for the European Central Bank, because it will add to the region’s inflationary pressures by increasing the cost of imports. Central bankers say they don’t target an exchange-rate level, but it will be hard for them to arrest the currency’s decline with words because the forces pushing up the dollar have been so strong.

With inflation in the United States near its highest rate in four decades, the Federal Reserve has ramped up its tightening of monetary policy with large interest-rate increases. Jerome H. Powell, the Fed’s chair, said at a conference in late June that he expected its benchmark rate to reach as high as 3.5 percent this year. He added that there was a risk that the central bank would go too far in raising rates to cool the U.S. economy but that letting inflation stay high was a greater risk.

As Mr. Powell spoke, he sat next to Ms. Lagarde at the European Central Bank’s annual retreat in Sintra, Portugal. While she agreed with him on the risk of persistent inflation, she did not match his commitment and clarity on how high interest rates could rise in the eurozone. Investors can only speculate about what might happen through the end of the year.

But even before the first rate increase, on July 21, the growing risk of recession in the eurozone has investors questioning how high the bank can raise rates before it has to stop again.

“The E.C.B. will struggle to keep up with the decisiveness that the Fed has in tackling inflation or pushing rates up,” Mr. Rahbari, the Citi analyst, said.

While the European Central Bank plans its rate increases, it also has to keep an eye on sovereign bond markets. There have been concerns about the impact of rising interest rates and the end of the central bank’s bond-buying programs on the bloc’s most indebted members.

In Italy, for example, borrowing costs rose sharply in June, and officials are trying to discern how much of those moves were a fair reflection of the risk of Italy’s financial situation and what was so-called fragmentation, or rapidly diverging interest rates between eurozone members that would make monetary policy less effective. The bank is preparing a new policy tool to deal with that fragmentation, which central bankers see as a break between economic fundamentals and government borrowing costs.

“It’ll be another testing time for the eurozone” and its central bank over the next year, Mr. Rahbari said.