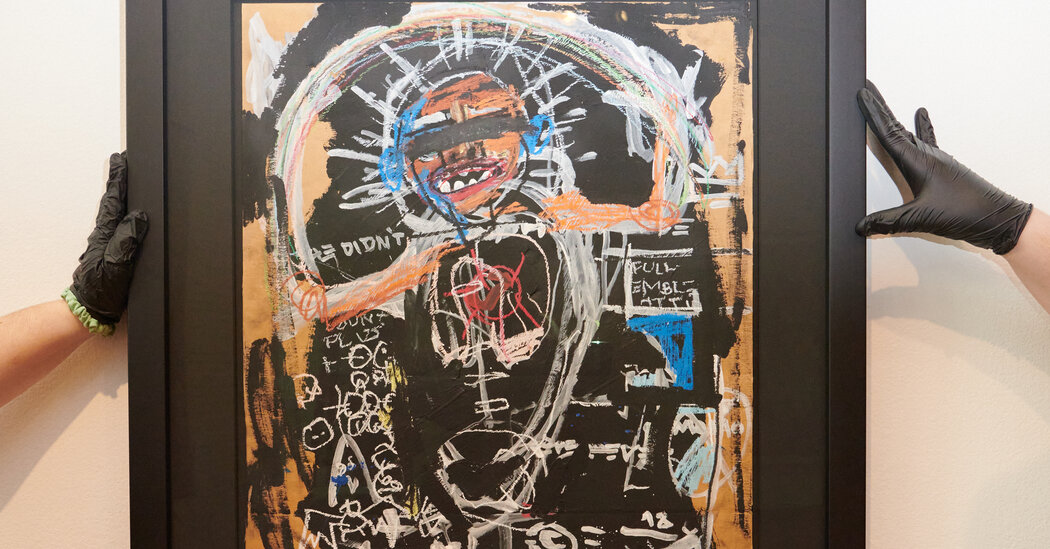 The ongoing cultural fascination with the life and work of Jean-Michel Basquiat shows little signs of dimming, whether it’s in the form of brisk sales for $29.99 Basquiat-themed T-shirts at The Gap, large crowds for Basquiat’s latest art exhibitions, or an actual canvas by the painter auctioned last week for $85 million.

To the ranks of those focused intently on all things Basquiat, you can now add the F.B.I.

The F.B.I.’s Art Crime Team is investigating the authenticity of 25 paintings that the Orlando Museum of Art says were created by Basquiat and are on exhibit there, according to a federal subpoena and several people with knowledge about the situation.

The paintings in the “Heroes & Monsters: Jean-Michel Basquiat” exhibition were said by the museum and their owners to have been recovered from a Los Angeles storage unit in 2012. The works were largely unseen before the show’s February opening. An article in The New York Times raised questions about their authenticity, reporting that a designer who had previously worked for Federal Express had identified the FedEx typeface on a piece of cardboard Basquiat was said to have painted on as one that was not designed until 1994 — six years after the artist’s death.

The paintings’ owners and the museum’s director and chief executive, Aaron De Groft, say the paintings are genuine Basquiats, citing statements from art world experts commissioned by the owners. And the chairwoman of the museum’s board, Cynthia Brumback, has publicly supported De Groft. The paintings are set to leave the museum on June 30 for public exhibitions in Italy.

F.B.I. Special Agents have interviewed people in the art and design worlds, focusing on the paintings in the exhibition and on their primary owners, who have previously said in interviews that they were trying to sell the works. Those questioned include De Groft, according to two employees of the museum who were granted anonymity because they said De Groft has warned the staff that anyone talking to the media would be fired.

De Groft did not respond to requests for comment on any F.B.I. questioning or on his instructions to the staff at OMA, as the museum is known.

In a subpoena to OMA dated July 27, 2021, the F.B.I. demanded “any and all” communications between the museum’s employees and the owners of the artworks “purported to be by artist Jean-Michel Basquiat,” including correspondence with experts regarding the artwork. The subpoena, which has been reviewed by The New York Times, shows that the F.B.I. has also demanded the museum’s board of trustee records concerning the paintings.

The F.B.I. declined to comment on the investigation, or its status. But a person connected to the case said he was interviewed in April. If authentic, the Basquiat paintings would be worth about $100 million, according to Putnam Fine Art and Antique Appraisals, which assessed them for the owners.

The specific focus of the F.B.I. inquiry, and whom the agency is targeting, is not clear. But the intentional sale of art known to be fake would be a federal crime.

De Groft and the owners of the 25 paintings have said that they were done on slabs of cardboard scavenged by Basquiat in late 1982 while he was living and working out of a studio beneath the Los Angeles home of the art dealer Larry Gagosian, as he prepared new work for a show at Gagosian’s gallery. They said the works were then sold by Basquiat for $5,000 to a now-deceased television screenwriter, Thad Mumford, who put them into a storage unit and forgot about them for 30 years — until the unit’s contents were seized for nonpayment of rent and auctioned off in 2012. (Gagosian has said he “finds the scenario of the story highly unlikely.”) The screenwriter’s trove was bought for about $15,000 by William Force, an art and antiques dealer, and Lee Mangin, a retired salesman.

A third owner is the Los Angeles trial lawyer Pierce O’Donnell, who in 2016 represented Amber Heard in her divorce from Johnny Depp and Angelina Jolie in her divorce from Brad Pitt. He subsequently purchased an interest in six of the 25 works and has hired a battery of experts, several of whom have said they appear genuine. A verdict from Basquiat’s estate is no longer possible: its authentication committee disbanded in 2012, at a time when many artists’ estates were ceasing to authenticate artwork because of costly litigation. Exhibiting paintings at a museum can often enhance the legitimacy of works without more established provenance.

Much of the back story establishing the paintings’ origins rests largely on the word of Mangin and Force, who have both served time in prison for felony drug trafficking under different names, law enforcement records show.

Force was arrested in 1973 under the name William Parks, and pleaded no contest to conspiring to import more than half a ton of marijuana from Jamaica to Miami by boat.

Mangin — also known to the authorities as Leo Mangan — was twice convicted on federal charges of trafficking cocaine, in 1979 and in 1991. In 1996 the Securities and Exchange Commission arrested him for securities fraud, alleging Mangan was part of a criminal ring that forged documents and illegally issued more than five million shares of bogus stock, earning him over $8 million in illicit proceeds. Mangan was convicted, and his 1999 sentencing included a lifetime ban on working in the securities trade.

The Federal Trade Commission later accused the debt consolidation companies Mangan co-owned with his wife, Michelle, of defrauding numerous consumers. In 2008, the couple paid almost $400,000 to settle the F.T.C. charges without admitting liability.

O’Donnell also has a criminal record, having pleaded no contest to violating campaign finance laws in 2006 and pleaded guilty to a second such charge in 2011, resulting in a 60-day prison sentence.

Richard LiPuma, a lawyer for Leo Mangan, said the provenance of the paintings was “airtight” and the fact that the owners were once in trouble with the law was irrelevant to the question of whether the works are genuine.

“The 25- to 40-year-old records of the owners’ ancient missteps do not reflect on the paintings themselves,” he said. LiPuma said Mangan was fully cooperating with the F.B.I., had asked OMA to do the same, and that “the F.B.I. investigation appears by us to be nothing more than a government agency doing its job by following up on a tip,” one he said was “undocumented.”

Force did not respond to a request for comment. O’Donnell said by email that “my misdemeanors for campaign finance law violations occurred about 20 years ago” and that “the paintings are authentic. Five experts conducted extensive due diligence.” He said he was eager to fully cooperate with the F.B.I.

Those at the museum who raised concerns this winter about the authenticity of the Basquiats were told by De Groft not to worry and that the subpoena was simply a formality, two witnesses reported.

Brumback, the board chair, did not respond to requests for comment. She told The Orlando Sentinel that while “we know questions have been raised about the exhibit,” museumgoers had nonetheless been reacting enthusiastically to it. “Attendance is up, diversity is up, shop sales are up,” she said. “People are enjoying themselves, which is very important to us. It supports our mission.”

Mangan said in an interview this winter that after buying the paintings with Force in 2012, the two had met Mumford in Los Angeles for lunch. It was there that Mumford supposedly told them all about his 1982 purchase of the 25 paintings from Basquiat, an encounter so memorable that Mumford had typed up a poem to commemorate the sale and had Basquiat initial the sheet of dot matrix printer paper it was typed on.

Mumford, who was said to have lost track of the 25 artworks in storage, kept the poem, Mangan said, and gave it to him at their meeting.

Several of Mumford’s friends and relatives are anything but convinced. It’s not only that Mumford never mentioned an interest in contemporary art, let alone buying Basquiats.

It’s also that Mumford didn’t type, according to Sheldon Bull, a television screenwriter and producer who worked with Mumford on “M*A*S*H” at the dawn of the 1980s and later in the decade on “A Different World.”

“Thad wrote on a legal pad,” Bull recalled. “We started back in the ’70s before there were computers, and a lot of people sent stuff to typists.” That didn’t change in the ’80s, he said: “I never saw Thad type a single letter.” He added, “Thad was as technophobic as anybody I’ve ever met. He did not own a computer.”

And then there’s the cardboard on which the Basquiats are painted, including one on a shipping box with a clearly visible company imprint: “Align top of FedEx Shipping Label here.”

Lindon Leader, an independent brand expert consulted by The Times, was shown a photo of the cardboard. He said that the typeface in the imprint was almost certainly based on Univers, a font not used by Federal Express on its shipping material until 1994 — six years after the artist’s death — when Leader redesigned the company’s logo and its typefaces while working at the Landor Associates advertising firm.

The doubts about that painting have raised questions within the art world about the other 24 paintings it was reportedly created alongside — and stored with — for 30 years.

De Groft has since cited unspecified research to assert that Federal Express used various fonts on its shipping materials throughout the 1980s. Leader said in a recent interview that such a notion was “ridiculous,” because the company has long had strict guidelines for its typeface and other graphic designs. Federal Express declined to comment.

De Groft did not respond to a request this week for his source on the FedEx font usage. But he has pointed to several reports commissioned by the artworks’ owners to support the works’ authenticity, including a 2017 analysis by the handwriting expert James Blanco, which identified signatures on many of the 25 paintings as being Basquiat’s.

There were also signed 2018-19 statements from the curator Diego Cortez that declared each painting a true Basquiat. (Cortez, who died last year, was a member of the Basquiat estate’s authentication committee.)

And De Groft has emphasized a 2017 report from a University of Maryland associate professor of art, Jordana Moore Saggese, the author of “Reading Basquiat: Exploring Ambivalence in American Art.” De Groft, Mangan and O’Donnell each said in interviews this winter that Saggese’s written analysis — which O’Donnell said he had paid at least $25,000 for — had attributed all 25 artworks to Basquiat.

But Saggese later said in an interview that her report had been misrepresented by the owners, who had removed pages where she clearly stated that nine of the 25 paintings could not be attributed to Basquiat.

She said that the editing process as she prepared her report had been tense. “The more that they started to push back at me, the more I began to question their motives,” she said.

The editing process that Saggese described raised questions for other experts. Allowing an artwork’s owner to have any influence on an attribution is typically considered “unethical,” said Colette Loll, a lecturer at Johns Hopkins University as well as the founder and director of Art Fraud Insights, a consultancy that specializes in art authentication.

Loll, who has trained members of the F.B.I.’s Art Crime Team to spot forgeries, said she had been asked by O’Donnell to authenticate the Basquiats as well but declined.

As she wrote on Twitter, addressing OMA’s Basquiat exhibition, “The lack of any real scientific analysis on methods and materials speaks volumes.” In another tweet, she added, “Handwriting analysis and poems don’t authenticate artworks.”