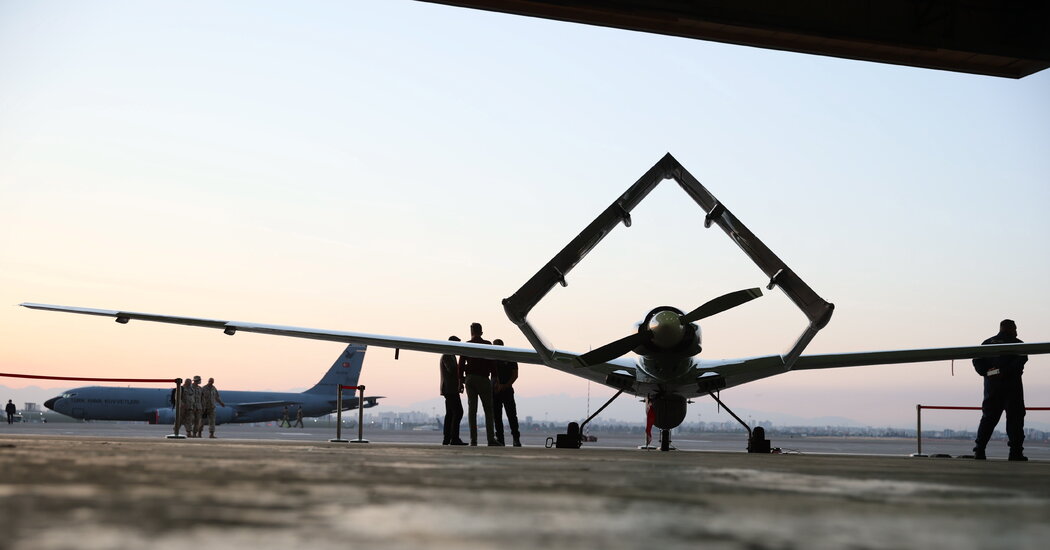 NAIROBI, Kenya — After Ethiopia’s embattled prime minister pulled off a stunning military victory earlier this month, reversing a rebel march on the capital that threatened to overthrow him, he credited the bravery of his troops.

“Ethiopia is proud of your unbelievable heroism,” the jubilant leader, Abiy Ahmed, told his troops on the battlefront at Kombolcha, on Dec. 6. “You were our confidence when we said Ethiopia would never lose.”

In reality, the reason for the reversal in Mr. Abiy’s fortunes was hovering in the skies above: a fleet of combat drones, recently acquired from allies in the Persian Gulf region and elsewhere who are determined to keep him in power.

Over the past four months, the United Arab Emirates, Turkey and Iran have quietly supplied Mr. Abiy with some of the latest armed drones, even as the United States and African governments were urging a cease-fire and peace talks, according to two Western diplomats who have been briefed on the crisis and spoke on condition of anonymity.

The motives of Mr. Abiy’s suppliers varied: to make money; to gain an edge in a strategic region; and to back a winner in the spiraling conflict that has engulfed Africa’s second most populous nation. But the impact of the drones was striking — pummeling Tigrayan rebels and their supply convoys as they pushed down a major highway toward the capital, Addis Ababa. The rebels have since retreated roughly 270 miles by road to the north, erasing months of battlefield gains.

On Sunday, the Tigray leader, Debretsion Gebremichael, told the United Nations he had ordered an immediate withdrawal of all forces to the borders of Tigray, citing, among other factors, “the drones provided by foreign powers.”

In a letter to Secretary General Antonio Guterres, Mr. Debretsion called for a cease-fire followed by peace talks. “We trust that our bold act of withdrawal will be a decisive opening for peace,” he wrote.

On Monday, his spokesman said that a wave of Ethiopian air strikes inside Tigray had killed 18 civilians and wounded 11.

An Ethiopian government spokeswoman did not respond to questions about the use of drones.

The demonstration of drone power confirmed that Ethiopia’s year-old conflict, largely a regional affair until now, has been internationalized. And it adds the country to a growing list of conventional conflicts, like those in Libya and Nagorno-Karabakh, where combat drones have become a significant factor in the fight, or even the dominant one.

“Increasingly, unmanned systems are becoming a game changer,” said Peter W. Singer, an expert on drone warfare at New America, a research group in Washington. “It’s not just about the raw capability of the drones themselves — it’s the multiplying effect they have on nearly every other human and system on the battlefield.”

For Mr. Abiy, the drones arrived just in time.

He launched a military campaign in Tigray in November 2020, a year after he won the Nobel Peace Prize, in coordination with the leader of neighboring Eritrea. But his forces suffered a humiliating defeat last summer when Tigrayan rebels forced them from Tigray, then started to push south. By late November the Tigrayans were approaching the city of Debre Birhan, about 85 miles north of Addis Ababa.

But they could go no further. Swarms of drones appeared overhead, striking soldiers and supply convoys, Gen. Tsadkan Gebretensae, a leading Tigrayan commander, said in an interview with The New York Times.

“At one time, there were 10 drones in the sky,” he said. “You can imagine the effect. We were an easy target.”

Mr. Abiy built his drone arsenal by tapping the sympathy of foreign autocrats and a booming segment of the global arms trade.

Even as he talked about negotiations, Mr. Abiy was turning to other countries to bolster his military. Nearly every day, cargo flights arrived from a military base in the United Arab Emirates, one of Mr. Abiy’s closest allies.

The Emiratis had trained Mr. Abiy’s Republican Guard and provided crucial military support at the start of the war, running drone strikes that took out Tigrayan artillery and weapons depots, a Western official and a former Ethiopian official said.

The Emirati strikes stopped in January after President Biden came to power, under pressure from Washington. But they have resumed in recent months, largely in the form of the latest Chinese-made drones, the officials said.

The Emirati drone strikes, under the direction of the national security adviser Tahnoun bin Zayed al-Nahyan, appear to be a snub to American diplomatic efforts to end the war. American officials say they are trying to draw the U.A.E. into peace efforts as an ally, but that cooperation is limited.

In a meeting with the United States regional envoy, Jeffrey Feltman, earlier this week, Sheikh al-Nahyan denied that his country was shipping weapons to Ethiopia, an American official with knowledge of the meeting said.

By contrast, Mr. Abiy’s dealings with Turkey have been relatively open.

He signed a military pact in August with Turkey’s president, Recep Tayyip Erdogan, whose Bayraktar TB2 drone played a decisive role in Azerbaijan’s victory over Armenia in Nagorno-Karabakh. It is manufactured by a company run by Mr. Erdogan’s son-in-law.

Turkish drones are attractive to many African countries seeking battle-tested, relatively cheap hardware with few strings attached. “Even in Africa, everywhere I go, they want U.A.V.s,” Mr. Erdogan boasted in October after a tour of Nigeria, Togo and Angola. (Drones are also known as unmanned aerial vehicles).

After Bayraktar drones appeared in Ethiopia recently, Turkish officials insisted the drone sale was a purely commercial activity —  defense and aviation exports to Ethiopia rose to $95 million this year, up from $235,000 in 2020, the Turkish Exporters Assembly reported.

Understand the Conflict in Ethiopia

A year of war. On Nov. 4, 2020, Prime Minister Abiy Ahmed began a military campaign in the country’s northern Tigray region, hoping to vanquish the Tigray People’s Liberation Front — his most troublesome political foe.

Rebels turned the tide. Despite Mr. Abiy’s promise of a swift campaign, the Ethiopian military suffered a major defeat in June when it was forced to withdraw from Tigray. Now the fighting is rapidly moving south.

Tigrayan forces close in. In late October, Tigrayan rebels captured two towns near Addis Ababa, the nation’s capital. The government declared a state of emergency and called on citizens to arm themselves.

No end in sight. President Biden has threatened to impose sanctions on the country to coax the sides to the negotiating table, but the war’s current trajectory could cause the collapse of Ethiopia.

But in recent days, Turkish officials have privately claimed to have frozen exports to Ethiopia, apparently in response to international pressure over a war that has become a byword for atrocities and starvation.

At least 400,000 people are living in famine-like conditions, according to the United Nations.

In response to reports of civilians killed, detained or expelled, the United Nations Human Rights Council agreed on Friday to set up a commission to investigate abuses and identify perpetrators — the latest of many international initiatives that, until now, have failed to stop the suffering.

Mr. Abiy, meanwhile, is focused on his military campaign and its foreign sponsors. On Friday he landed in Istanbul for the Turkey-Africa Partnership Summit — a two-day gathering of leaders from 39 African countries that, analysts say, is also a forum for Turkish arms sales.

His embrace of Iranian drones, although much less powerful than the Chinese or Turkish-made models, has further strained his relations with Washington.

Since August a number of cargo flights have arrived in Ethiopia operated by Iranian airlines that the U.S. has accused of being fronts for the Quds Force, the expeditionary wing of Iran’s Islamic Revolutionary Guard Corps. Flight-tracking blogs have made note of the shipments as well.

American officials in Addis Ababa have made private representations to Mr. Abiy about the Iranian flights, urging him to cut them off, a United States official said.

Mr. Abiy’s drone army remains modest: By several estimates, he has no more than a few dozen combat drones at his disposal, and they can be expensive to run, repair and supply with weapons. But they remain a potent threat to the Tigrayan forces, which themselves have no access to drones.

Mr. Singer, the drone expert, said the experimentation with drone warfare in Ethiopia and Libya has parallels with the Spanish Civil War in the 1930s, when outside powers used the fight to test new military technologies and to gauge international reaction to determine what they could get away with. “It’s a combination of war and battle lab,” he said.

But, he added, technology is no guarantee of victory. “The U.S. had drones in Afghanistan, yet the Taliban managed to hold out for 20 years,” he said. “Human will is what determines the outcome of war.