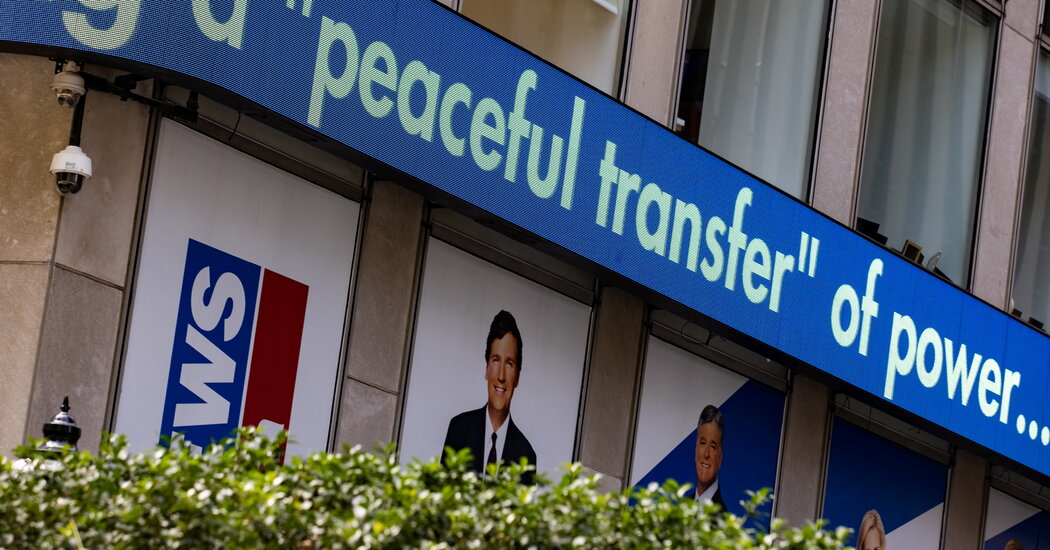 Three prominent Fox News anchors sent concerned text messages on Jan. 6 to Mark Meadows, the last chief of staff for President Donald J. Trump, urging him to persuade the president to take the riot seriously and to make an effort to stop it.

The texts were made public on Monday, shortly before the House committee scrutinizing the Jan. 6 attack on the Capitol voted 9-0 in favor of recommending that Mr. Meadows be charged with contempt of Congress. Representative Liz Cheney, Republican of Wyoming, read the text messages aloud.

The texts, part of a trove of 9,000 documents that Mr. Meadows had turned over before he stopped cooperating with the inquiry, were sent to the former White House chief of staff by Laura Ingraham, the host of the nighttime show “The Ingraham Angle”; Sean Hannity, a longtime prime-time host who once appeared onstage with Mr. Trump at a campaign rally; and Brian Kilmeade, a host of the morning show “Fox & Friends.”

“Mark, the president needs to tell people in the Capitol to go home,” Ms. Ingraham wrote. “This is hurting all of us. He is destroying his legacy.”

Mr. Kilmeade echoed that concern, texting Mr. Meadows: “Please, get him on TV. Destroying everything you have accomplished.”

Sean Hannity texted: “Can he make a statement? Ask people to leave the Capitol.”

Ms. Ingraham’s text came in contrast with what she said on her Fox News program in the hours after the attack, when she promoted the false theory that members of antifa were involved.

“From a chaotic Washington tonight, earlier today the Capitol was under siege by people who can only be described as antithetical to the MAGA movement,” Ms. Ingraham said on the Jan. 6 episode. “Now, they were likely not all Trump supporters, and there are some reports that antifa sympathizers may have been sprinkled throughout the crowd.”

Ms. Ingraham went on to cite “legitimate concerns about how these elections were conducted,” while adding that any dissatisfaction with the vote should not have resulted in violence.

Mr. Hannity, a onetime informal adviser to Mr. Trump, condemned the attack, saying at the top of his Jan. 6 show, “Today’s perpetrators must be arrested and prosecuted to the full extent of the law.” He also said that the nation must do more to protect law enforcement and political representatives.

On that matter of who was responsible, Mr. Hannity said, “I don’t care if the radical left, radical right — I don’t know who they are. They’re not people I would support. So how were officials not prepared? We got to answer that question. How did they allow the Capitol building to be breached in what seemed like less than a few minutes?”

He also brought up the 2020 election, the results of which had been questioned by Mr. Trump and his supporters in the weeks before the riot, although there was no evidence of widespread fraud.

“Our election, frankly, was a train wreck,” Mr. Hannity said. “Eighty-three percent, according to Gallup, of Republicans, and millions of others, do not have faith in these election results. You can’t just snap your finger and hope that goes away.”

Representatives for Fox News did not immediately respond to a request for comment.

In the 11 months since the attack, the Fox News hosts who appear in the morning and in the prime-time hours have often played down the events of Jan. 6, with some likening it to the violence during the widespread protests against racism and police violence in the summer of 2020.

Last month, Tucker Carlson, the Fox News host with the largest audience, produced a three-part documentary, “Patriot Purge,” for the Fox Nation streaming platform that contained the false claim that the Jan. 6 attack was a “false flag” operation meant to demonize the political right.

More than 500 people have been arrested in relation to the pro-Trump riot at the Capitol. Mr. Carlson falsely claimed in the documentary that “Jan. 6 is being used as a pretext to strip millions of Americans — disfavored Americans — of their core constitutional rights.”

Chris Wallace, the longtime anchor, resigned from Fox News on Sunday after 18 years to take a job at CNN. Before his abrupt exit, he expressed concern about the documentary in talks with management.

Two longtime Fox News contributors, the conservative commentators Jonah Goldberg and Stephen Hayes, quit last month in protest of the Carlson special, calling it “totally outrageous” and saying that it “will lead to violence.”