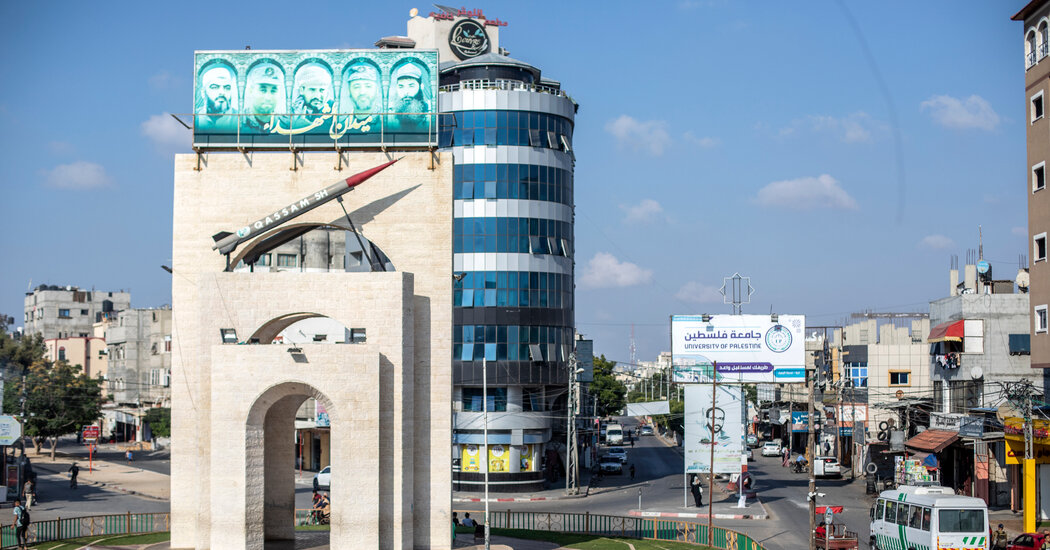 GAZA CITY — At a beachfront hotel in Gaza City this fall, hundreds of Gaza civic leaders crowded into a Hamas-sponsored conference to hear claims of an imminent Hamas victory over Israel.

“The state of Israel will be history,” the conference director, Kanaan Abed, said in a speech broadcast across the strip. “Palestinians outside Palestine: Prepare your papers. You will return to Palestine after the liberation.”

The reality, however, was nearly the opposite.

Seven months after Hamas launched an 11-day war with Israel, the deadlock between Israel and the Islamist movement has returned to roughly where it was before the fighting started.

Israeli strikes in May killed at least 130 civilians and up to 100 militants, and destroyed or damaged more than 1,000 homes, shops and offices in Gaza. Rockets from Hamas and its allies killed 13 people in Israel and, accidentally, at least 15 Palestinians in Gaza.

But otherwise, not much has changed. The 14-year Israeli-Egyptian blockade of Gaza is intact. The Palestinian leadership remains split between Gaza and the West Bank. The prospect of peace negotiations between Israel and the Palestinians, moribund since 2014, is as remote as ever.

Even Hamas’s one indisputable gain — a bump in popularity among Palestinians, burnished by starting the war in the first place — has dissipated, its poll numbers falling to nearly the same level they were early this year.

Its mantle as the leader of the armed resistance against Israel has been tarnished by rising criticism of its governance of Gaza and concerns about corruption and rampant unemployment. And though the group publicly declares that it vanquished Israel during the fighting in May, it is privately pushing for piecemeal economic concessions from Israel and has yet to obtain a reconstruction deal to mend the war damage.

“Everything here is frozen, you can say — cloudy, foggy,” Ghazi Hamad, a member of the group’s political council in Gaza, said in a recent interview. “It’s not clear in which direction we are going.”

Hamas has been here before, several times.

Few see a way out of this cycle.

As a militant group that refuses to recognize Israel and, according to its founding charter, is committed to its destruction, Hamas has few other tools beyond unleashing a barrage of rockets every few years.

Israeli officials are also prepared to maintain the deadlock. They will continue to enforce the blockade to limit Hamas’s ability to restock its arsenal and rebuild its fortifications, but see a strategic benefit to keeping Hamas in power.

“We don’t want to defeat Hamas,” a senior Israeli Army official said in an interview. Its main rival in Gaza — a more extreme Islamist faction — “is not better than Hamas,” the official added, speaking on the condition of anonymity in accordance with Israeli protocol.

Caught in the middle, ordinary Gazans are paying the price. The unemployment rate is higher than 40 percent. Only 10 percent have direct access to clean water, according to UNICEF. Complex medical procedures are often available only in Israel, which restricts entry to Gaza patients.

Most blame Israel first and foremost. Some criticize the Palestinian Authority, Hamas’s rival in the West Bank, for having imposed temporary salary cuts on its employees in Gaza.

But increasingly, Gazans also blame Hamas for exacerbating conditions through nepotism, corruption and incompetence, and for diverting too much money from social programs to military infrastructure.

“I want work more than rockets,” said Ali el-Jeredly, a jobless 28-year-old waiting to apply for a permit to work in Israel.

Last month, Mr. Hamad’s son, Mohammad, set off a fierce backlash when it emerged that he had booked an Egyptian vacation for his brother, a luxury unaffordable to most Gazans. The news came to light shortly after a ship smuggling Gaza migrants to Europe capsized in the Aegean.

The juxtaposition underscored claims of a two-tier society and synthesized much of the criticism ordinary Gazans have for Hamas.

Hamas has been trying to address these concerns by seeking economic concessions from Israel. For all its bombast, the group needs Israel to reduce the impact of the blockade, which could improve the economy and temper domestic criticism.

Mr. Hamad believes the war forced minor concessions from Israel, and confirmed Hamas’s status as a protector of Jerusalem. But governance remains “a big, big burden,” he said. “How can we feed people? How can we lift the siege on Gaza? These are the main topics that we are thinking about all the time inside Hamas.”

While there is no question that the blockade has severely damaged Gaza’s economy, many Gazans have come to believe Hamas’s policies have only made it worse.

“The first person responsible for this blockade is Israel, not anyone else,” said Hassan Dawoudi, a 26-year-old dissident detained several times by the Gaza security services for his views. “But Hamas has at least something to do with it.”

Israeli officials argue that Hamas has everything to do with the blockade, which was imposed after it seized control of Gaza in 2007, having refused to recognize Israel and renounce violence.

Hamas leaders still rule out those moves. Most of Gaza’s population consists of descendants of refugees who fled or were forced out of Israel during the 1948 war. For many, Hamas’s vow to reclaim that land still resonates.

Hamas leaders feel the group has already moderated enough, engaging in an electoral process it once rejected — even winning national elections in 2006 — and at least nominally limiting its territorial ambitions, saying in 2017 it would accept a Palestinian state in the West Bank and Gaza.

But the group has never recanted its founding covenant calling for Israel’s destruction and the death of Jews. Much of the world, including Israel and the United States, lists it as a terrorist organization.

The group’s realpolitik — negotiating, albeit indirectly, with Israel — undermines its messaging.

To avoid wrecking the talks, Hamas has averted serious military escalation in Gaza since May.

Hamas members have continued to carry out small-scale attacks, including the killing of an Israeli tour guide in November in Jerusalem, and have encouraged unrest in the West Bank. Militants have sent several incendiary balloons and fired bullets into Israeli territory, and killed an Israeli border guard at point-blank range.

Israeli security services said they had arrested dozens of Hamas operatives in the West Bank, where they were accused of planning further attacks. Israeli military officials also believe that Hamas was connected to a spate of rocket attacks from Lebanon in the summer, the senior Israeli official said.

But relatively few rockets have been fired since May, and none since September, which analysts say is a signal that the group wants to avoid another major air war.

Israel has responded by enlarging Gaza’s fishing zone, allowing Gazans to export more goods and produce, and granting 10,000 work permits, the most since Hamas took power. Thousands of Gazans lined up for hours to apply.

A monthly stipend from Qatar, worth roughly $30 million and suspended during the war, was finally reinstated in full in November.

But a comprehensive reconstruction plan involving wealthier international donors has yet to be completed.

Hamas depends on Egypt, which controls Gaza’s southern border crossing, almost as much as it depends on Israel, and that relationship has improved.

Hamas has denounced Egypt for making peace with Israel, and ties frayed further in 2013, after the Egyptian Army forced out President Mohamed Morsi, who came from the same Islamist movement as Hamas.

But a 2017 détente strengthened after the war as Mr. Morsi’s successor, Abdel Fattah el-Sisi, sought to exert influence in Gaza by taking an active role in its reconstruction. Egypt has pledged $500 million toward postwar reconstruction.

Despite the pronouncements of its leadership, there are also discussions among some Hamas members about the need for a marginally more pragmatic approach to Israel, according to Motasem Dallal, a political analyst in Gaza.

“I don’t see that it’s not good to talk to Israel,” said Mr. Dallal, who said he is not a Hamas member but spoke regularly with its leaders. “You are under Israeli occupation, they are occupying you, they are controlling everything in your life, and they can kill you. So why not speak with them?”

That is a bridge too far for Hamas’s leaders.

Mahmoud al-Zahar, a co-founder of the movement, said the group simply needed to wait patiently for Israel’s downfall, just as the Taliban waited two decades for American forces to leave Afghanistan.

To him, Israelis are a temporary colonial presence, rather than a people with a millennia-long connection to the land.

“Once the Taliban succeeded,” Dr. al-Zahar said, “the Americans escaped.”