Happy. Sad. Angry? Golden State Is Feeling It All Against Memphis. 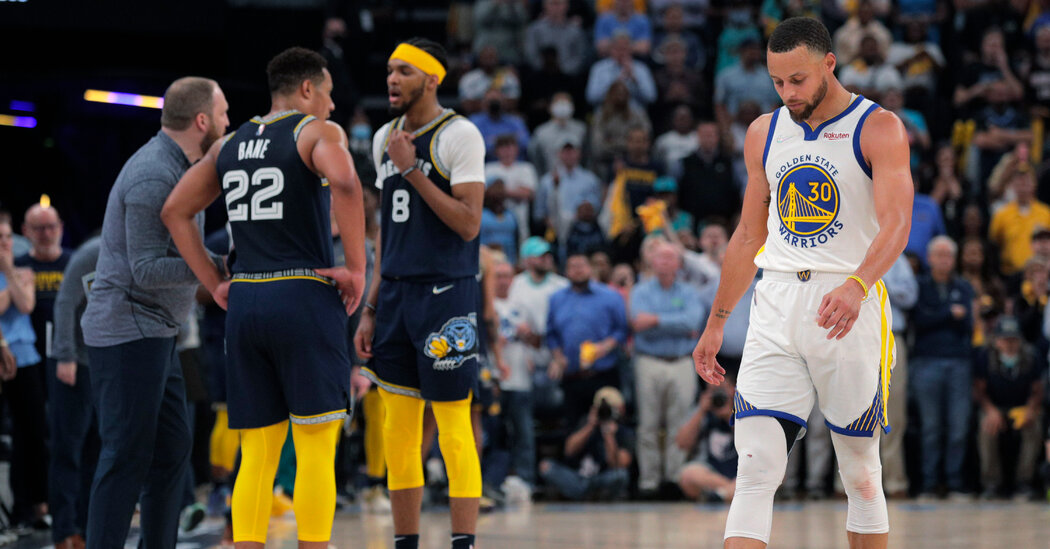 MEMPHIS — The Golden State Warriors expected a physical fight in Game 2 of their second-round N.B.A. playoff series with the Memphis Grizzlies. But to lose that game, 106-101, and to lose a beloved defender to a fractured elbow? Those events they did not expect.

It created a mélange of emotions after the game — anger, disappointment, frustration.

“It’s going to be a long three days with that feeling, but we understand what we need to do,” he said.

And also: “We’ve been in a lot of different series that’s taken a lot of twists and turns.”

And later: “Lot of adversity, a lot of adrenaline and emotion. We’ve just got to win four games somehow some way.”

The loss, on Tuesday night, showed the challenge of the emotional balance the Warriors pride themselves on having. As they attempt to win another championship, they are finally getting to play in high-stakes games after a two-year postseason drought. With that comes the potential for highs, like their emotional 1-point win in Game 1 against the Grizzlies, but also lows, like the way they felt after their loss Tuesday. The series, which is tied 1-1, will continue in San Francisco with Game 3 on Saturday.

“Everybody’s bummed out,” Golden State Coach Steve Kerr said. “But it’s the playoffs, so everybody will shower up and we’ll get on the plane and head home. We’re in a good spot.”

The two years during which Golden State missed the playoffs made those players who had been through the championship years that much more wistful for the thrill of playoff stakes.

“I think it’s almost like a drug in some ways,” said the assistant coach Ron Adams, who has been with the team since 2014.

Only six players from the last N.B.A. finals run, in 2019, remain, but they have returned to the playoffs with a deeper understanding of their emotions.

“I got excited after Game 1 because it was such a hard-fought game, but as soon as I went back to the hotel that adrenaline wore off and I realized it’s just one game and it’s a marathon,” guard Klay Thompson, 32, said. “For me, I think I’m a lot more centered than I was our first time doing this.”

He also believes some things haven’t changed, and shouldn’t.

“I’ve been through the biggest battles with Dray, and he embraces those moments, he embraces being the villain,” Thompson said of forward Draymond Green. “We need that. He really makes us go, and without him, we’re not the Warriors.”

On Tuesday morning, Kerr had said Golden State expected Game 2 to be the most physical game the team had played all season.

It roiled their emotions, with the hostile Grizzlies crowd lifting the home team. Memphis guard Ja Morant scored 47 points, including 18 in the fourth quarter, and the Grizzlies capitalized on Golden State’s mistakes late. But the opening minutes set a tense tone.

Grizzlies forward Dillon Brooks was ejected less than three minutes into the game, having received a flagrant-2 foul after swiping Gary Payton II across the head as Payton was in the air to try to make a basket. Payton fractured his elbow when he landed awkwardly.

“I don’t know if it was intentional, but it was dirty,” Kerr said, later accusing Brooks of jeopardizing Payton’s career.

Green also left the game in the first quarter after Xavier Tillman inadvertently elbowed him in the face. Hearing boos from the crowd, Green raised his middle fingers toward the fans as he left the court to get stitches above his right eye.

“It felt really good to flip them off,” said Green, who answered other questions about the night in clipped sentences. “You’re going to boo someone that got elbowed in the eye and had blood running down your face? I could’ve had a concussion or anything. So if they’re going to be that nasty, I can be nasty, too. I’m assuming the cheers was because they know I’ll get fined. Great. I make $25 million a year. I should be just fine.”

Green and Grizzlies fans were already on bad terms coming into the game. He had been ejected from Game 1 after a hard foul on Memphis forward Brandon Clarke. On Tuesday, Green returned to the game at the start of the second quarter with his right eye nearly swollen shut.

All the while, Golden State was figuring out how to recover from a hot Grizzlies start and Payton’s injury.

“It was like 8-0 at the time, so I was trying to get settled in the game,” Curry said. “That play happens. It pisses you off, you have a reaction, understand there’s 45 minutes left in the game. You’ve got to kind of settle back in emotionally. We did a really good job until the fourth quarter.”

It was a marked change from Golden State’s demeanor following the Game 1 win, but that shift is typical in playoff series, particularly the closer they are to the finals.

Curry’s signature emotion is happiness. Lately, as Golden State has advanced in the playoffs, as the games have become more crucial and challenging, those around him have seen more of that.

“Just the simple phrase, ‘You got to love it’; heard him say that a few times,” Bruce Fraser, an assistant coach who works closely with Curry, said Tuesday morning. “You can feel his energy. He walks around with an energy around him. I know him so well it’s hard for me to describe what that is because I just feel it.”

Being able to prevent an emotionally taxing loss from changing that has been a part of Golden State’s success in the past.

On Tuesday morning, Thompson spoke not just about his efforts to stay calm in exciting moments, but also about his improved ability to not worry too much in more negative moments. He said he loved to play in any game he could, given his two-year absence from the sport as he recovered from two leg injuries.

He also spoke about his confidence that Golden State could handle anything, because in his years playing with Curry and Green, they have, he said, “been through everything.”

He recalled a playoff series against the Grizzlies in 2015 and how aggressively that Memphis team played. Golden State also lost Game 2 of that series before winning it on the way to Thompson, Curry and Green’s first championship. That’s not to say the situations are identical. In 2015, Golden State was the top seed in the Western Conference, while Memphis was fifth. This season, the Grizzlies had the second-best record in the N.B.A., while Golden State was third.

Those types of experiences, though, help keep emotions stable.

After Tuesday’s game, Curry spoke with reporters before he even changed out of his game uniform. Still, he already seemed to be moving past the emotion of the game. He exhibited the cerebral quality that leads the rest of his team.

“It’s in our DNA,” Curry said when asked how Golden State would recover from this loss. “We know what to do.”