Highgate Cemetery: A City of the Dead That Inspires the Living 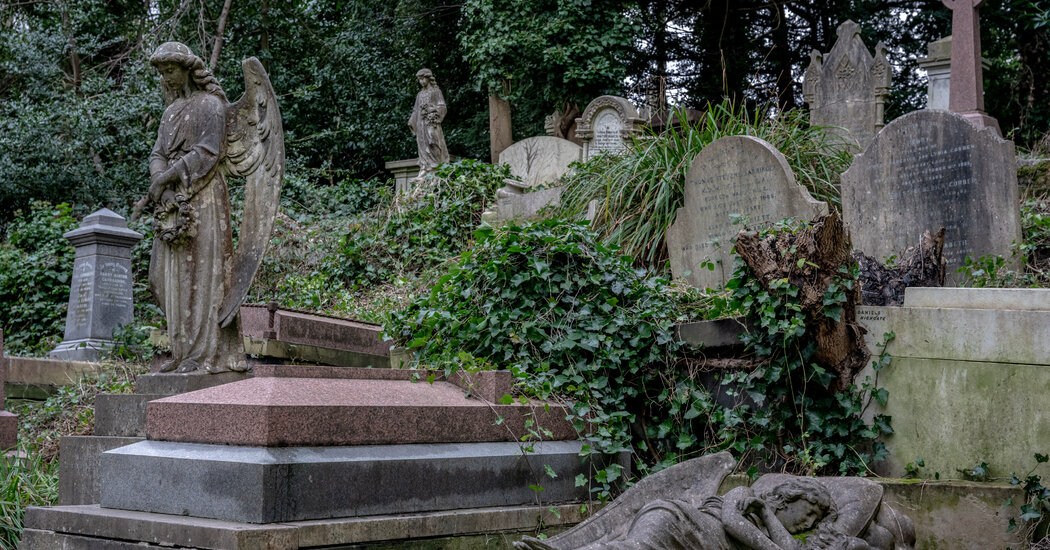 Highgate Cemetery is the final resting place for about 170,000 Londoners, among them the famous, the infamous and the ordinary. Since the start of the pandemic, its leafy pathways have taken on new meaning for some in the city.

LONDON — Vines crawl up headstones, tipping them on their side. Roots overtake tombs as if reclaiming them for the earth. On one toppled cross, a message: “Peace, Perfect Peace.”

This is the final resting place for about 170,000 Londoners, among them George Eliot, Karl Marx and Henry Moore.

Perched on a steep hillside peering over the capital city, Highgate Cemetery, a Victorian graveyard that is still in use today, is a tangle of monuments partly engulfed by a forest that has sprung up around it.

To stroll through its meandering trails is to experience a catalog of Victorian lives, the great and the small, the rogues and the upstanding citizens, as well as the Victorian way of death. Many in 19th-century Britain’s burgeoning middle-classes prepared all of their working lives for a magnificent funeral and burial site as a way to prove their worthiness for entry to heaven — often leaving little or nothing for their survivors.

While that world has long since passed, for many today, Highgate is simply a welcome place of refuge from the sprawling city below, particularly in the Covid era.

“It’s this tranquil city of the dead, in contrast to the city of the living below,” said Ian Dungavell, the chief executive of the Friends of Highgate Cemetery Trust, a group that saved the site from even greater dereliction in the 1980s and now manages it.

During Britain’s first lockdown, when people were allowed to leave their homes for only necessities and exercise, the cemetery began to see a surge in visitors as Londoners looked for secluded outside spaces to escape — and to evade the virus.

The site also took on a new resonance, Dr. Dungavell said, as so many people’s lives have been touched by illness and death during the pandemic. Britain has recorded about 160,000 deaths since it began in early 2020.

“A phenomenal number of people have died throughout the course of the pandemic, in this country and, obviously, around the world,” he said. “I think very few people have been able to go through the pandemic and not think about their own mortality.”

On a bright morning in early February, daffodils were just beginning to poke through the soil between the rows of teetering gravestones, and dappled light peeked through the trees that sprouted up here during decades of neglect. The gothic beauty of the overgrown cemetery is seemingly a far cry from what its designers intended.

Founded in 1839 on a site with a sweeping view of the city, Highgate Cemetery was one of Victorian London’s “Magnificent Seven” commercial graveyards, the first to be built on the outskirts of town to help ease the burden on overcrowded churchyards.

But the once carefully manicured tract fell into disrepair shortly after World War II, when its owners went bankrupt. As maintenance was neglected, weeds, vines and self-seeding trees took over. And vandalism became more frequent.

In the 1980s, a group that came to be known as the Friends of Highgate Trust rescued the site. The group maintains the site and welcomes visitors, for a nominal fee, and tries to ensure access for the families of those buried there.

The west side of the cemetery opened first and includes the most elaborate tombs, those designed to vault their occupants into the afterlife, while the east side has more contemporary graves.

The centerpiece of the west side is “Egyptian Avenue,” which features a row of vaults with iron doors that mimic the tombs of pharaohs. The mortar now falls from the brick underneath.

Among them are the resting places of Radclyffe Hall, a famed poet and novelist known for the semi-autobiographical book “The Well of Loneliness,” about a lesbian love story, and her partner, Mabel Veronica Batten, a famous singer — all of this at a time when laws criminalizing homosexuality were often brutally enforced.

Many of the tombs provide clues to the lives of those now lying there: A sleeping lion atop the grave of a famed owner of a Victorian traveling menagerie, a mourning dog at the foot of his owner’s headstone.

At the grave of Alexander V. Litvinenko, a former K.G.B. officer turned enemy of the Kremlin, who was buried in Highgate in 2006 after being poisoned at a London hotel (most likely at the command of President Vladimir V. Putin of Russia, a 2016 British inquiry report said), a cutoff column symbolizes a life cut short.

Steps away, the headstone of a young woman — Emma Wallace Gray — details a horrifying death at 19, explaining in elaborate detail how her dress caught fire and she was badly burned. She died 10 days later, on Oct. 20, 1845.

“In bloom of youth when others fondly cling to life, I prayed mid agonies for death,” her epitaph reads.

At the foot of her grave, snowdrops poked up through the soil, their white blooms stooped like heads hung in mourning.

The somber epitaphs and the stories of these lost lives have proved to be a draw for introspective visitors looking for time to themselves.

Licia Proserpio, 37, an Italian academic with a shock of bright blue hair and a love of history, wove her way along the narrow path between the graves and paused for a moment at a site. She said her visit had given her some time for self-reflection.

“You can wander around with your thoughts,” she said.

Mandy Wootton and Lynn Cook, who visited Highgate that same day, said that the cemetery had prompted conversations about end-of-life decisions — whether they wanted to be buried or cremated, and how they wanted to be remembered. But it had also been a life-affirming experience, they said.

Perhaps the most famous person buried in Highgate is Marx, whose impressive tomb on the east side of the cemetery features a giant bronze bust that is not universally admired. Set amid a sprinkling of graves of other noted socialist figures, it draws visitors from around the world. It has also been the site of a number of acts of vandalism in recent years.

Alex Keros, 32, and his partner, Irene Pappa, 30, both Greek and living in London, had a particular interest in visiting Marx’s tomb recently.

“We are more or less politically aligned — we are left-minded,” Mr. Keros said. “But also, there are a lot of poets and literary figures buried here.”

The east cemetery is also filled with many newer graves, their headstones jutting up from the hillside like crooked teeth. And the epitaphs are more personal: Gone are the Victorian odes to piety that dominate the older section of the cemetery. In their place are snippets of a life.

For Patrick Caulfield, a famed British painter most often associated with Pop Art and who died in 2005, the message he left behind was a direct one. Spelled out on his granite step-design headstone in bold cut letters was one simple word: “D E A D.”

Nearby is the grave of Jeremy Beadle, who died in 2008. “Writer, presenter, curator of oddities. Ask my friends,” his headstone reads.

And across a path lies “Gordon Belle (Middle name Ernest, though he placed no importance on it.)”

Two friends puzzling over a map of the cemetery’s winding trails, Kristin Brooks-Dowsett, 33, and Claudia Kowalczyk, 32, who had set aside the day for some outdoor exploring together, said they enjoyed learning about the lives lived.

“I think it tells these amazing stories,” Ms. Brooks-Dowsett said. “I don’t think we tell stories enough these days.”

She said that she had visited Highgate before, and that she was comfortable with the idea of death. It helps that her mother is a funeral director in her native Australia.