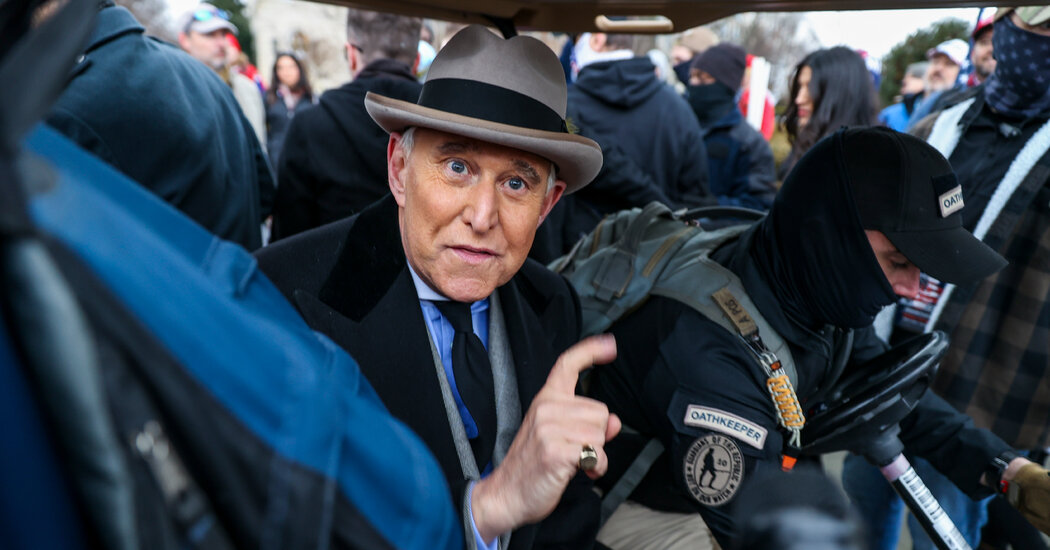 The subpoenas, which come after the committee has interviewed more than 200 witnesses, indicate that investigators are intent on learning the details of the planning and financing of rallies that drew Mr. Trump’s supporters to Washington based on his lies of a stolen election, fueling the violence that engulfed Congress and delayed the formalization of President Biden’s victory.

“We need to know who organized, planned, paid for and received funds related to those events, as well as what communications organizers had with officials in the White House and Congress,” said Representative Bennie Thompson, Democrat of Mississippi and the chairman of the committee.

Mr. Stone promoted his attendance at the rallies on Jan. 5 and 6, and solicited support to pay for security through the website stopthesteal.org. While in Washington, he used members of the Oath Keepers as personal security guards; at least one of them has been indicted on charges that he was involved in the Capitol attack.

Mr. Jones reportedly helped organize the rally at the Ellipse near the White House that immediately preceded the riot, including by facilitating a donation to provide what he described as “80 percent” of the funding, the House committee said. Mr. Jones has said that White House officials told him that he was to lead a march to the Capitol, where Mr. Trump would meet the group and speak, according to the committee.

Mr. Stone and Mr. Jones were among the group of Trump allies meeting in and around the Willard Intercontinental Hotel near the White House the day before the riot.

Mr. Stone, a longtime Trump adviser, was seen flashing his signature Nixon victory sign to supporters as members of the Oath Keepers protected him. He was also photographed on Jan. 5 with Michael T. Flynn, the former national security adviser who has also been subpoenaed, but Mr. Stone has claimed that he was leaving town as rioters stormed the Capitol.

Mr. Stone said he had decided against a plan to “lead a march” from the White House Ellipse to the Capitol on Jan. 6, according to a video posted on social media.

Mr. Jones conducted an interview of Mr. Flynn from the Willard on Jan. 5 and was then seen among the crowd of Mr. Trump’s supporters the next day, amplifying false claims of widespread fraud with a bullhorn.

The committee is also demanding documents and testimony from Dustin Stockton and his fiancée, Jennifer L. Lawrence, who reportedly assisted in organizing a series of rallies after the election advancing false claims about its outcome.

Mr. Stockton was reportedly concerned that the rally at the Ellipse would lead to a march to the Capitol that would mean “possible danger,” which he said “felt unsafe.” These concerns were escalated to Mark Meadows, the White House chief of staff, the committee said.

The committee also issued a subpoena to Taylor Budowich, a spokesman for Mr. Trump, who reportedly solicited nonprofit organizations to conduct a social media and radio advertising campaign encouraging attendance at the rally at the Ellipse and promoting unsupported claims about the election result, the committee said.

The subpoenas issued on Monday require that all five people produce documents and testimony by mid-December. The committee has issued 40 subpoenas in total, investigating everything from the planning and financing of the “Stop the Steal” effort to Mr. Trump’s every movement as the violence spread on Jan. 6.

The subpoenas come as the committee is struggling to compel some allies of Mr. Trump to comply with its investigation. Stephen K. Bannon, a former top aide to Mr. Trump, has been charged with federal crimes after refusing to comply with his subpoena, while members of the committee have said that they are considering recommending contempt of Congress charges against two other potential witnesses: Mr. Meadows and Jeffrey Clark, a former Justice Department lawyer involved in Mr. Trump’s plans to overturn the election.