How China and Xi Jinping Have Turned on the Outside World 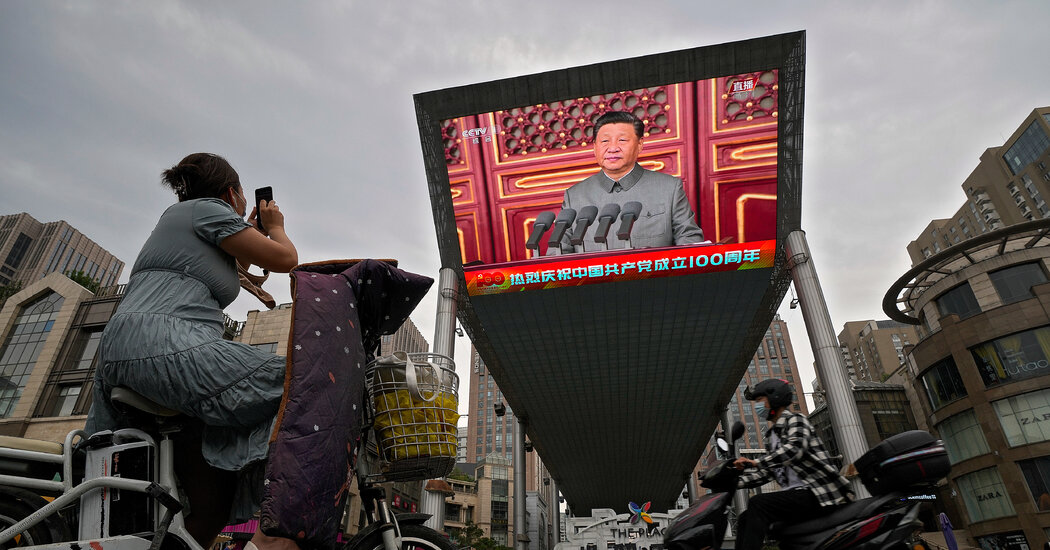 The miracle of modern China was built on global connections, a belief that sending young people, companies and future leaders to soak up the outside world was the route from impoverishment to power. Now, emboldened by its transformation, the country is shunning the influences and ideas that nourished its rise.

The country’s most dominant leader in decades, Xi Jinping, seems intent on redefining China’s relationship with the world, recasting the meeting of minds and cultures as a zero-sum clash.

And the government, citing the coronavirus pandemic, is no longer freely issuing most passports, the physical symbol of an interconnected world. Borders are almost entirely shut.

“There’s no more integration and exchange between different cultures,” said Zhang Jincan, the owner of Dusk Dawn Club, a live-music venue in Beijing.

Before the pandemic, the club was a fixture of the city’s curious, plugged-in music scene. Locals crammed in to hear visiting Polish jazz quintets or Argentine percussionists. Expatriates could discover up-and-coming Chinese punk bands. Performances were often organized with foreign cultural organizations.

Now, Mr. Zhang worries that the very essence of his club is disappearing. “You get a kind of aesthetic fatigue,” he said.

There is little chance of returning to the isolationism of the Mao era, when the nation was sealed off from the world financially as well as culturally. The pandemic has made clear how much the global economy relies upon China, and how much China has benefited. Mr. Xi says he has no intention of decoupling from other economies.

“Countries around the world should uphold true multilateralism,” he told the World Economic Forum last month. “We should remove barriers, not erect walls.”

But if the government values the economic benefits of globalization, the same does not seem true of less tangible ones: artistic, intellectual, interpersonal. Those ties — which made China not just a fixture of the world economy, but a member of the global community — are being scrutinized, restricted or rejected.

Anything seen as — or, increasingly, tarred as — foreign is vulnerable to attack by vitriolic online nationalists. Celebrities promoting vegetarianism have been accused of peddling Western lifestyles.

Even this month’s Winter Olympics in Beijing, by definition one of the most globally minded events in the world, was conducted on China’s terms: without foreign spectators, and in defiance of diplomatic boycotts by countries including the United States.

It was sports that once smoothed the way for diplomatic entreaties.

After the Communists took power in 1949, the first Americans to officially enter China, decades later, were nine table tennis players. The countries’ teams met in 1971 at the World Table Tennis Championship in Japan, and the Chinese government invited the Americans for a weeklong visit, in which they toured the Great Wall, watched a dance troupe and played matches. A year after the “Ping-Pong diplomacy,” President Richard Nixon made his historic visit to China, the opening salvo for the two countries to re-establish diplomatic ties.

In the decades that followed, China’s deepening global connections signaled its expanding ambitions.

More than 6.5 million Chinese studied abroad between 1978 and 2019, with the number rising each year. Chinese tech companies listed on Wall Street, their innovations copied by Silicon Valley. Schoolteachers used songs by Western boy bands to teach English, seen as vital for economic opportunities.

The outside world was hungry to know more about China, too. Between 2002 and 2018, the number of international students in China grew nearly sixfold. The 2008 Beijing Olympics helped the country pitch itself as a global tourist destination.

Wariness lingered. Deng Xiaoping, the leader who spearheaded the economic opening, memorably warned that an open window brings both fresh air and flies. But in those heady early days, many believed that China was hurtling irreversibly toward openness.

Mr. Xi proved them wrong. Since he took over in 2012, the Chinese Communist Party has restricted foreign nongovernmental organizations, accusing some of conspiring against the country. It has banned overseas textbooks, emphasizing that only it can guide China to greatness. Increasing hostility from the United States also prodded Chinese leaders into a more defensive posture.

To limit imported cases, officials said they would not issue or renew passports, except for emergencies, work or study abroad. The number of passports issued in the first half of 2021 was 2 percent of the same period in 2019.

Sarah Duan, 16, applied for a passport in December, after being admitted to a private high school in Seattle. Immigration officials in her home of Shanxi Province told her that minors were not allowed to leave the country, she said.

Ms. Duan called the national immigration administration, which said no such policy existed.

Still, local officers rebuffed her, arguing that the pandemic overseas was too dangerous, or pointing to China’s fraught relationship with the United States.

“I wanted to say, what do U.S.-China tensions have to do with me?” said Ms. Duan, who finally secured a passport last month. Shanxi immigration officials did not return a faxed request for comment.

Despite his rhetorical commitments, Mr. Xi is narrowing the scope of economic engagement, calling for reduced reliance on exports and keeping Chinese companies closer to home. After Didi Chuxing went public in New York last year without regulators’ blessing, the Chinese government announced an investigation into the ride-hailing company. Within months, Didi delisted.

And though China wants foreign money, it is driving away the people who accompany it. The number of foreigners living in Beijing and Shanghai has dropped by nearly one-third in the past decade, according to European business groups.

Even after China opens its borders, some fear the deteriorating climate will keep foreigners from coming.

Before the pandemic, Sarah Keenlyside, who has lived in Beijing for 16 years, organized tours for Western executives visiting on business. First-timers sometimes came nervously, with concerns and misconceptions about government surveillance. But they left impressed by the high-speed trains and safe cities. Some returned for family vacations.

“It’s sort of a vicious cycle,” Ms. Keenlyside said. “If people don’t come, then they don’t get to see it for themselves.”

Stereotypes are likely to harden in the other direction, as China imposes new curbs on outside influences.

Last summer, education officials barred online tutoring firms from hiring teachers based overseas, cutting off a popular source of English lessons and cultural exchange. In December, regulators ordered television credits to specify whether any actors or crew had foreign citizenship.

Those decisions were couched as part of broader moves to ease students’ workloads, or tame China’s unruly celebrity culture. But officials at times have been more explicit about the insidious effects of foreign ideas. Mr. Xi has denounced blind worship of Western cultural products, and demanded confidence in traditional culture, which he calls a “major issue related to the rise and fall of national fortunes.”

The art world has raced to comply in ways that concern Jiang Bing, a contemporary art curator.

Ms. Jiang helped organize this year’s Chengdu Biennale, which features hundreds of works from China and abroad. She said many artists still want to engage with their international counterparts. But she had seen others reaching for obvious symbols of Chinese heritage, such as Ming dynasty clothing, rather than searching for more nuanced or novel ways to express cultural pride.

“If there’s no corresponding process of thinking, questioning and criticism, that can’t be real cultural confidence,” she said.

Some say the emphasis on the homegrown is a natural result of China’s rising status. While American films once often sat atop the Chinese box office, domestic ones now dominate. Local fashion designers, long dismissed as second-rate, command higher prices.

Sun Lei, 24, moved to Britain last fall for a master’s degree, having long aspired to study and work abroad. But the country’s lax virus management gave him a deeper appreciation for China’s ability to carry out policies without the friction seen in Western democracies.

“The reality is that China’s development and entire economic situation are trending upward,” said Mr. Sun, who intends to return home after graduation. “That’s beneficial for my personal development.”

Still, he plans to use a virtual private network to access blocked overseas websites after moving back. China’s growing middle class, increasingly well traveled and fluent in global pop culture, is unlikely to accept a wholesale retreat from the outside world.

Even some unexpected voices have defended cultural engagement.

But the government is tightening controls over VPNs. Those who criticize China’s increasing insularity are often censored or drowned out by nationalist voices. Mr. Wang has himself been attacked online for saying that China needs global engagement.

The virtual vitriol has real-world consequences. Last fall, officials in the northeastern city of Dalian shuttered a Japan-themed shopping complex within two weeks of opening, after online commenters denounced it as a form of cultural invasion.

In the long term, the hostility could imperil the very rise that nationalists are eager to promote.

Last year, a government adviser formally warned China’s legislature that the restrictions could harm foreign policy. “Excessive management will affect experts’ analysis of international issues and the quality of their advice,” wrote the adviser, Jia Qingguo, who is also a Peking University professor.

Reached by email, Professor Jia agreed to an interview. But he said regulations required university approval first, which never came.