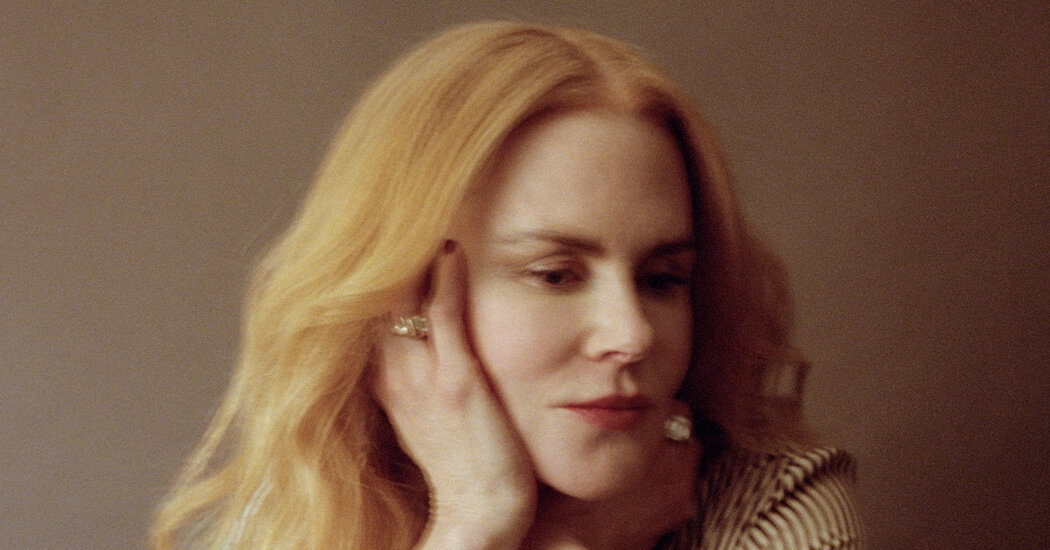 There are valuable lessons Nicole Kidman has learned each time she plays a real-life figure: How that person was misapprehended by society at the time. How that era of history is more like the present day than she realized. And, crucially, how to maintain her balance while traipsing barefoot through a vat of grapes.

Recounting her preparations to play Lucille Ball, the star of “I Love Lucy,” Kidman suggested that her methodical efforts to learn Ball’s enduring 1956 grape-stomping routine were not fully sufficient when it came time to re-enact it on camera.

“I had only practiced on a floor,” Kidman said with a gentle earnestness. “The one thing I didn’t count on was that there were going to be real grapes. They’re actually really slippery, just so you know.”

In “Being the Ricardos,” a comedy-drama written and directed by Aaron Sorkin, Kidman plays Ball in a story spanning a week at “I Love Lucy,” where she and her husband Desi Arnaz (Javier Bardem) fight to incorporate Ball’s pregnancy into the series, fend off accusations that Ball is a Communist and arrive at a fateful point in their marriage.

The movie, which is in theaters and on Amazon Prime, includes some recreations of famous “I Love Lucy” scenes. But it is ultimately a story of discovery, for the TV star and for the woman playing her.

Kidman, 54, is an Academy and Emmy Award-winning actress, and she is once again a contender for year-end accolades for her performance in “Being the Ricardos.” But she tends to second-guess herself and said she had scant confidence in her comedic abilities.

Through her approach to “Being the Ricardos,” Kidman has found more connection than she expected to Ball, another actress who was pigeonholed and underestimated in her day. Their life stories and talents may not fully overlap, but they both understood the necessity of humor to fulfilling their individual goals.

As Kidman said, “I’ve got to be funny, and funny’s hard.”

On a visit to New York earlier this month, before the Omicron surge, Kidman was sitting in a downstairs lounge at a boutique Soho hotel, her fingers ornamented with intricate rings as she sipped a ginger shot.

Kidman said that “I Love Lucy” reruns were a hazy background element from her childhood, and that she leaned toward shows like “Bewitched” and “The Brady Bunch.”

What to Know About ‘Being the Ricardos’

The Aaron Sorkin-directed dramedy looks at one very bad week for Lucille Ball and Desi Arnaz, played by Nicole Kidman and Javier Bardem.

She could point to the occasional comic performance on her résumé, in a dark satire like “To Die For” or a family film like “Paddington,” though she had to be reminded that there was some physical clowning in “Moulin Rouge,” too. (“There was, that’s right!”) Even on a somewhat sardonic series like HBO’s “Big Little Lies,” Kidman said, “It’s Reese Witherspoon and Laura Dern who are very funny. I just say to them, I’ll be your straight woman.”

And she has no illusions that she was the most logical candidate for the role of Ball or even the first actress sought to play her.

At its inception several years ago, “Being the Ricardos” was contemplated as a TV mini-series, according to Lucie Arnaz, the actress and daughter of Lucille Ball and Desi Arnaz, and an executive producer on the movie.

Cate Blanchett was attached, but by the time Sorkin became involved and the project was set up at Amazon as a film, the actress was no longer available. “It just took too long and we lost her,” Arnaz said in an interview. “I was devastated.” (A press representative for Blanchett declined to comment.)

As other stars were contemplated, Arnaz said, “None of them made me happy. It was always like, who’s the flavor of the month? Who’s got the hot movie of the minute?”

But when Kidman emerged as a possibility, Arnaz said, she was intrigued. “I thought that’s good — we should only be looking at Australian actresses for this,” she joked.

Kidman said that Blanchett’s previous involvement did not diminish her interest. In show business, Kidman said, “I feel like there’s a sacred pact among us all — whoever gets something, that’s where it was meant to land.”

She was aware of a backlash online from fans who opposed her casting, some of whom wanted the role to go to the “Will & Grace” star Debra Messing. “I’m not on the internet and I definitely don’t Google myself,” Kidman said. “But things trickle through.”

She was not deeply versed in Ball’s life when she was first approached, but Kidman said she could imagine the freedom in portraying that slapstick queen: “The way she moves and falls, every part of her physicality, you go, oh, I can be an absolute doofus playing her.”

Still, after signing onto “Being the Ricardos” with some gusto, Kidman said she began to get cold feet. Her reluctance, she said, was partly about the pace of Sorkin’s dialogue-dense screenplay and partly about making the movie during the pandemic.

But on a fundamental level, Kidman said that comedies do not come easily to her — not as a genre and not as acting opportunities. “I don’t get cast in them,” she said. That might be the result of a career spent in dramas, or, “it might be my personality, too.”

Reflecting on her upbringing in Australia, Kidman said, “I was the kid that was not allowed to go on the beach during the middle of the day, because I was so fair and I was going to burn. So I would sit in a room and I wouldn’t watch TV — I’d read.” A youth spent with Dostoyevsky, Flaubert and Tolstoy “doesn’t necessarily make you a comedian,” she said.

If she’s going to take on a role with any comic qualities now, Kidman said, “I need to be pushed and cheer-leaded in that area.”

Sorkin was persuasive, Kidman said, and she was buoyed by past experiences landing a funny line in stage plays here and there. “It’s pretty wow when you say something and a whole theater laughs,” she said. “I can understand getting addicted to that.”

What the film really required, Kidman said, was for her to play Lucille Ball (as depicted in Sorkin’s script) and not Lucy Ricardo. “Lucy’s a character — that’s not Lucille,” she explained. “Lucille is extraordinary because she was knocked down, got back up and just doggedly kept at things.”

The more she reflected on the screenplay and learned about Ball’s life, Kidman said, the more she saw a multifaceted person who gave her many emotions to play.

In Ball’s marriage to the philandering, alcoholic Arnaz, Kidman said, “She loved a person who loved her but couldn’t give her want she wanted most.” Pointing to the fizzled film career that eventually led Ball to “I Love Lucy,” she said, “She was really funny but she wanted to be a movie star.”

Kidman stopped short of drawing direct parallels between Ball’s life and her own, but Lucie Arnaz wholeheartedly embraced the comparisons.

Arnaz said that like her mother, Kidman “had been married before — she understood divorce and trying to raise your children in the spotlight. She understood a husband who had an addiction problem.” (Kidman’s husband, the singer Keith Urban, has been treated in the past for drug and alcohol abuse.)

Kidman threw herself into the physical preparations for the role and worked closely with a dialect coach, Thom Jones, to develop the voices she would use for Lucille Ball and Lucy Ricardo.

As Jones explained, “Lucy is Lucille extreme. When Lucille played Lucy, she did a broad, exaggerated version of herself and pitched her voice higher.”

Ball’s natural speaking voice was deeper and huskier from years of smoking, though Kidman was not necessarily striving for perfect mimicry. “We wanted her to grab at the essence of Lucille and get that across,” Jones said. “If you’re doing an impersonation, you’re going to be too aware of your outside and not be able to fill your inside as an actor.”

Kidman ran lines with her mother, a lifelong “Lucy” fan, though it’s not clear how helpful this was to her overall process. “She’d say, ‘You got this word wrong,’ and I’d go, ‘Mom, just let me get to the end of the sentence before you correct me.’ Rule No. 1, don’t learn lines with your mom.”

She also studied personal audio recordings that Arnaz shared with her, and worked with a movement coach while learning to duplicate several “I Love Lucy” routines, though only a handful appear in the film.

Kidman has already received nominations for several honors, including a Golden Globe and a Critics Choice Award, for “Being the Ricardos,” but her performance remains an occasional source of insecurity for her.

She seemed surprised to be told about an October teaser trailer for the film that only fleetingly showed her face in a span of about 75 seconds, and that prompted some viewers to ask why Amazon appeared to be hiding Kidman.

Asked if she was aware of the teaser or the strategy behind it, Kidman said, “I don’t know how to answer that, you know? I don’t handle the promotional part of it. Maybe they were just scared of showing me.”

She drew a breath before adding, “Bummer.”

Whatever other notices she receives for “Being the Ricardos,” Kidman will always have the experience of standing on a facsimile of the “I Love Lucy” set, performing Ball’s material from the show and hearing the laughter of scores of extras hired to play the show’s studio audience.

Kidman offered a single word to describe how she felt in that moment: “Fantastic.” Then, as if to demonstrate some of the skills she’d picked up on the film, she waited a beat and said: “They were made to laugh, by the way.”