How They Did It: Sandy Hook Families Savor Long-Awaited Legal Wins 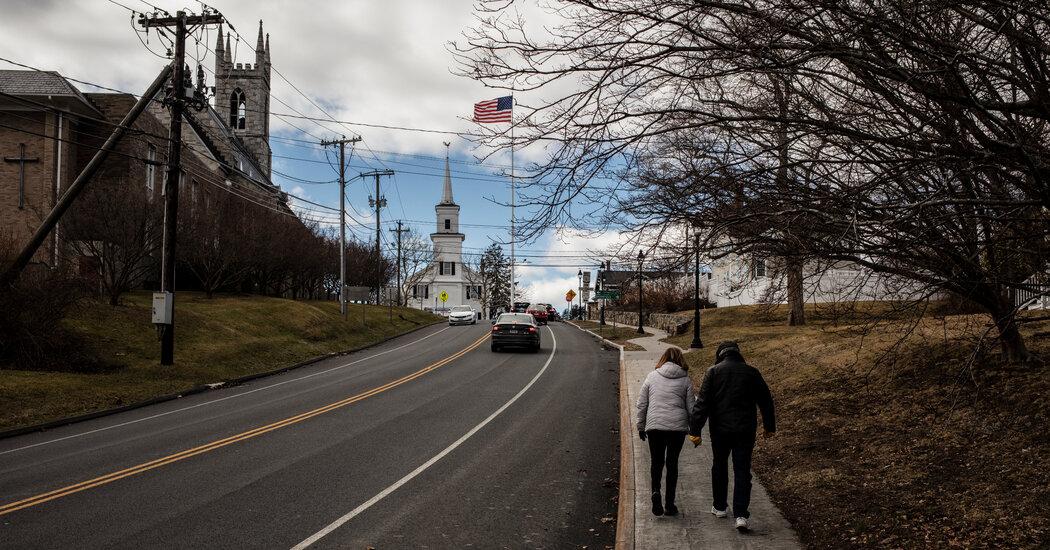 The image stopped him cold. Josh Koskoff, a Connecticut lawyer, was scanning crime scene photos of the 2012 Sandy Hook school shooting when he noticed “taped mags” on a classroom floor, two ammunition magazines crudely duct-taped together to speed reloading.

The gunman had dropped them during his rampage that killed 20 first graders and six educators in Newtown, Conn.

That photo was a “checkmate moment,” Mr. Koskoff said, in the novel legal strategy that ultimately resulted in the $73 million settlement last week for the families of nine Sandy Hook victims from insurers for Remington, the maker of the Bushmaster AR-15-style rifle used in the massacre. It was the largest payout so far in a mass-shooting-related case against a gun manufacturer.

The settlement was also the latest in a half-dozen legal victories by the families that have renewed scrutiny of the gun industry and of the rising tide of misinformation that engulfed Sandy Hook. Left devastated nine years ago when the Senate failed to pass even modest gun control legislation after the massacre, the families have now won on two difficult fronts — against a gun manufacturer and against conspiracy theorists, including Alex Jones — through persistence, creative legal strategies and in the case of the conspiracists, the technological expertise of Lenny Pozner, a parent who foresaw the long-term danger of rampant social media falsehoods.

“We started to talk about ‘There has to be a way to get something done,’” said David Wheeler, whose 6-year-old son, Ben, perished at Sandy Hook, recalling the days after their push for gun control failed in the Senate. He now senses that for the first time, “a lot of people believe we’ve changed things.”

At the heart of the legal strategy against Remington was the families’ claim that the manufacturer had illegally marketed the military-style Bushmaster to troubled young men like the Sandy Hook gunman, Adam Lanza, 20. Remington said the families lacked proof the gunman ever saw its advertising before he killed himself inside the bullet-riddled school.

Before the shooting, Mr. Lanza had spent hours a day playing Call of Duty, a video game in which players used the Bushmaster to wage war. Mr. Koskoff, the lawyer for the families, had played Call of Duty too, introduced to it by one of his sons — and he recognized the duct-taped magazines from a contemporaneous version of the game.

“Once I saw that in that first-grade classroom, that was it for me,” Mr. Koskoff said last week. “Remington may not have known him, but they’d been courting him for years.”

In the Connecticut defamation case against Mr. Jones, the Koskoff lawyers cited the same Connecticut trade practices law used in the Remington case, saying Infowars profited from broadcasting Sandy Hook falsehoods. Two defamation cases in Texas and one in Wisconsin employ a range of strategies. Nearly all the lawyers involved are parents themselves.

‘Paths Up the Mountain’

After the defeat in the Senate, some family members began thinking about how to hold the maker of the Bushmaster to account. Several got in touch with Mr. Koskoff, from a third-generation family firm in Bridgeport, Conn.

Mr. Koskoff cautioned the families that those who joined the lawsuit were in for an arduous fight with an uncertain outcome. The families of nine victims joined Soto v. Bushmaster; others declined for reasons ranging from their views on gun policy to family needs.

“A real advantage for us was our total ignorance about the law surrounding gun litigation and all the hurdles” that had dissuaded others, Mr. Koskoff said. So they forged ahead in the face of the formidable legal shield for the gun industry that Congress had passed in 2005, which protects firearms manufacturers from most liability after gun-related crimes. Wayne LaPierre, the National Rifle Association’s chief executive at the time, hailed it as “the most significant piece of pro-gun legislation in 20 years.”

As the Koskoff team considered varying “paths up the mountain,” trying to find legal routes around the shield law, one partner, Alinor Sterling, explored a potential road in one of six exceptions to the legal immunity the legislation provides: Lawsuits against manufacturers can move forward if plaintiffs can prove that marketing of the guns violates state law.

The lawyers learned that sales of the Bushmaster had grown exponentially between 2005 and the 2012 shooting. In 2006, a New York-based private equity firm, Cerberus Capital Management, bought Bushmaster, a privately held manufacturer in Maine and one of the companies building the AR-15-style rifle. Cerberus acquired other American gun makers, rolling them into a conglomerate that after several iterations took the name of the best-known company, Remington.

Remington’s leadership sought to turn the new entity into a firearms powerhouse, Mr. Koskoff said. Staid, technical ads for the Bushmaster were replaced by an aggressive marketing campaign targeting young men admiring of the military, known in the trade as “couch commandos.”

Flashy, militaristic pitches with macho slogans like “Forces of opposition, bow down,” “Clear the room” and “Consider your man card reissued” ran in men’s magazines, but also on online marketplaces and websites frequented by young men immersed in combat weaponry, Mr. Koskoff said. The Bushmaster appeared in combat video games like Call of Duty, which “is a virtual shooting range for potential future users,” Mr. Koskoff said.

In 2014, the families sued Remington on the grounds that Bushmaster’s marketing violated the Connecticut Unfair Trade Practices Act, a consumer protection law.

“The gun conglomerate formed by Cerberus blew through two very well established lines by targeting younger users who could not be lawful purchasers, and people who presented an increased risk to public safety,” Mr. Koskoff said. “They never asked, ‘How can we market this weapon in a way that reduces the risk of dangerous use?’ It appears from all the evidence that they did the opposite.”

Mr. Koskoff was still exploring legal avenues for the case in the closing days of 2013 when the Connecticut State Police released thousands of photos and records from their investigation of the shooting.

When he saw the image of duct-taped magazines lying on the floor, the leg of a small desk chair at the edge of the frame, “the hair on my arms stood up,” he said. “I knew that without a single document I could make the case that there was a connection between the marketing of the gun in the game, this kid and the shooting.”

Years later, preparing to depose Remington executives, Mr. Koskoff asked a paralegal to create a PowerPoint slide with the classroom photo on the left, and an image of the taped magazines from Call of Duty on the right. They were nearly identical.

A lawyer for Remington did not respond to requests for comment. The financial settlement will be paid by the defunct company’s four insurers: Liberty Mutual’s Ironshore; Chubb; James River Insurance Company; and North American Capacity Insurance Company, a Swiss Re subsidiary.

A devastating attack. On Dec. 14, 2012, a 20-year-old gunman killed his mother and then walked into the elementary school armed with semiautomatic pistols and a semiautomatic rifle. He killed 26 people there, 20 of them children, before killing himself.

The push for gun control. Then-President Barack Obama vowed to “use whatever power this office holds” to stop such massacres from happening again. Though legislative efforts to pass a ban on assault weapons and expand background checks failed, a new wave of activism focused on gun control gained traction.

The National Shooting Sports Foundation, the firearms industry’s trade association, issued a statement last week sidestepping the significance of Bushmaster’s marketing to young men. “The plaintiffs never produced any evidence that Bushmaster advertising had any bearing or influence over Nancy Lanza’s decision to legally purchase a Bushmaster rifle,” it said, “nor on the decision of murderer Adam Lanza to steal that rifle, kill his mother in her sleep and go on to commit the rest of his horrendous crimes.”

The Connecticut case could provide a legal road map for similar lawsuits. Ms. Sterling said she had received messages from lawyers across the country.

“I’ve been bringing cases against Remington since 1985,” one wrote. “You finally cracked the code.”

Battles for Truth in 3 States

As the Remington case crawled along, the families of 10 Sandy Hook victims and an F.B.I. agent implicated in the conspiracy theories sued Mr. Jones in Texas and Connecticut in four separate lawsuits in 2018. By the end of last year, judges in all four suits ruled that Mr. Jones was liable by default because he has refused to turn over documents ordered by the courts, including financial records.

In trials beginning this spring, juries will decide how much Mr. Jones must pay the families in damages.

Mr. Pozner, the father of Noah Pozner, the youngest Sandy Hook victim, is a technology consultant who understood the online conspiracy world, and how social media algorithms hasten the spread of harmful content. He has devoted his life since the shooting to battling conspiracy theorists and the social platforms that enable them. His nonprofit, the HONR Network, has succeeded in getting hundreds of thousands of pieces of harmful content removed from Facebook, YouTube, Twitter and other platforms, and persuaded hosting companies to take down entire websites devoted to denying the shooting. Mr. Pozner’s efforts have made him a target. He has moved nearly a dozen times after hoaxers, his moniker for the Sandy Hook deniers, posted his address online. In 2017 a Florida woman, Lucy Richards, was jailed for threatening Mr. Pozner’s life.

The Fetzer case showcased another novel legal strategy, this one devised by Genevieve and Jake Zimmerman, a husband-and-wife team who were Mr. Pozner’s pro bono lawyers. Seeking to prevent Mr. Fetzer from airing his Sandy Hook theories in a courtroom, they narrowed the case to four specific statements in Mr. Fetzer’s book falsely claiming that Mr. Pozner had forged Noah’s death certificate. Then the lawyers sought a judgment without a full trial.

Securing this summary judgment required Mr. Pozner to prove that Noah had actually lived and died, and that he was Noah’s father. The lawyers gathered records related to Noah’s birth, life and death. Mr. Pozner took a blood test, and his DNA matched a sample from Noah’s post-mortem.

Mr. Fetzer produced no evidence to support his false claims, and lost the summary judgment. In a process similar to what will happen in the Jones cases later this year, a jury convened to decide on damages. They awarded Mr. Pozner $450,000, which ballooned to more than $1 million following sanctions after Mr. Fetzer leaked Mr. Pozner’s sealed deposition to other conspiracy theorists, fueling more abuse.

“Of course the victories feel good, but they were very slow in coming,” Mr. Pozner said. “It’s a relief, but I’m kind of tired, you know?”