In a Disrupted N.F.L., Teams Scramble to Adjust Their Routines 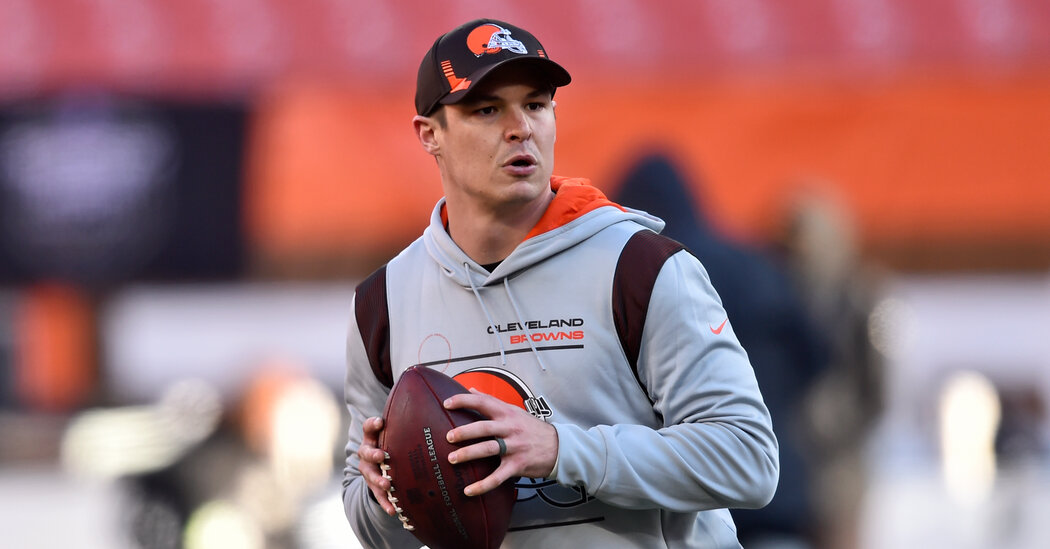 Athletes are creatures of habit, but N.F.L. players are in a league of their own. Nearly everything in their busy lives during the season is tightly prescribed: Sleep, meals, practices, training sessions, time in the trainer’s room.

So on Friday, when the N.F.L. bowed to the surge in the number of players testing positive for the coronavirus and moved three weekend games to Monday and Tuesday, it did more than disrupt fans’ television viewing habits.

In addition to the “Monday Night Football” game, the Cleveland Browns are playing the Las Vegas Raiders on Monday, after their game on Saturday was moved. Then, on Tuesday night, the Washington Football Team is scheduled to play the Eagles in Philadelphia at the same time the Seattle Seahawks are at the Los Angeles Rams.

The extra days off will give injured players more time to heal, a blessing this late in the season, when muscles, joints and bones are sore from months of abuse.

But players and teams build rhythms as a season progresses, and the last-minute tweaks to the schedule — all in the name of finishing the season on time and keeping the league’s television partners happy — can create havoc for players and coaches.

Extra practices need to be created, including more time for video to be watched, which has the potential drawback of giving players and coaches so much time that they overthink an opponent. Travel schedules are also disrupted: On Monday, the Browns and Raiders kicked off at 5 p.m. in Cleveland, which is 2 p.m., Las Vegas time, an unusual time for an N.F.L. game to begin.

The early-week games also give teams less time to recuperate and plan for Week 16, when many teams are battling to qualify for the postseason.

“Teams are going to get impacted going into next Sunday,” said Steve Gera, who worked in the front offices of the Browns and the Chargers for 10 years and who now runs a sports performance company. “We’re in the back half of the season, and you have a compressed timeline, so these games will have a bigger impact on the teams trying to rest up and get ready for the playoffs.”

The schedule changes are a function of the number of players on the league’s Covid-19 reserve list, which has ballooned in recent days because of the spread of the Omicron variant of the coronavirus. On Monday, 43 players were added to the Covid-19 reserve list, including Travis Kelce of the Kansas City Chiefs and Joey Bosa on the Los Angeles Chargers. There are so many players on the reserve list for Cleveland and Washington that the teams had to consider starting quarterbacks signed from their practice squads.

Coaches, for their part, have to adjust their routines, too. Rams Coach Sean McVay said that for planning purposes, he treated Sunday like a typical Friday and treated Monday like a typical Saturday in hopes of aligning the game plan and practice flow for a Tuesday game. After facing the Seahawks, the Rams will play the Minnesota Vikings on Sunday, which will give his team the same amount of rest it would receive if it were playing a Thursday night game after a Sunday game. McVay said the Rams were emphasizing mental preparation because of the shuffling.

“These are things that we’re well equipped to do this late in the season, especially,” McVay said on a call with reporters on Sunday. “It’s a real premium on the above-the-neck information and maximizing walk-throughs and things like that.”

Washington Coach Ron Rivera echoed McVay. His team’s schedule worked out well, he said, because it played the Dallas Cowboys on Dec. 12 and will face them again on Sunday night on a short week after the Eagles game. The schemes from their previous meeting should still be fresh, Rivera said, and players and coaches had the unusual opportunity of watching the Cowboys-Giants game on Sunday, film that they typically would have watched later in the week.

“Most of the work’s been done with the exception of this next game that they’re going play,” Rivera said Saturday in a news conference.

The impact of the juggled schedule on injuries is difficult to track, Gera said, because so few games are postponed in a given season. The league moved games last year when outbreaks spread on teams. Teams played on a Tuesday for the first time in a decade, and one game was played on a Wednesday afternoon. The quality of play appeared to suffer in those games. The San Francisco 49ers also played two of their home games in Glendale, Ariz., because of local prohibitions on large-scale gatherings.

The vast majority of games, though, were played on schedule, and this season the league did not have to postpone any games until Week 15.

Five of the six teams that had their games moved played on the Sunday of the previous weekend, so those teams will have an equal amount of rest. (The Rams played on Dec. 13, a Monday, so they will have one fewer day off than their opponent on Tuesday, the Seahawks. But the Rams are home.)

The older players, too, may benefit from the extra day or two of rest because they tend to take longer to recover from injuries than their younger teammates, particularly at this point in the season. That this is the first season to have 17 regular-season games makes rest a large bonus.

And while players have complained about games on Thursdays and their impact on their bodies, at least one study, which looked at injuries from 2012 to 2017, found that injury rates were not appreciably altered by playing games on those days rather than limiting the schedule to Sundays and Mondays.

Coaches love to tell their players to take one game at a time and not to think too far ahead. But the six teams whose games were moved have no choice but to look at the Week 16 calendar. The Browns, for instance, are scheduled to play the Packers on Saturday in Green Bay, Wis., never a hospitable place for visiting teams.

Last season, 15 games were rescheduled, including a handful that were moved by shuffling bye weeks. When postponed games were played in the same week, the home team won in four of the six instances.

The accommodation for teams with a high number of players on the Covid-19 list has not gone over well with players on teams unaffected by outbreaks.

“So we have to suffer and compromise our schedule because of another teams mistake,” Eagles safety Rodney McLeod tweeted on Friday. “Make it make sense! Smh.”

Casey Hayward, a cornerback for the Raiders, implied the N.F.L. showed favoritism for the Browns because their center, J.C. Tretter, is president of the union.

McVay acknowledged that teams without outbreaks of the virus might be unhappy, but the postponements help maintain the competitiveness of the games because more players will be available.

“Do I understand why Seattle or some of these other teams that were ready to go would be frustrated? Absolutely,” McVay said on Saturday. “Nobody wants to have to play on a shorter week, but I do think one of the greatest things about the N.F.L. is it’s based on equity, trying to create a fair playing field, great competition.”