In a Georgia Mill Town, Soccer Presents a New Opportunity 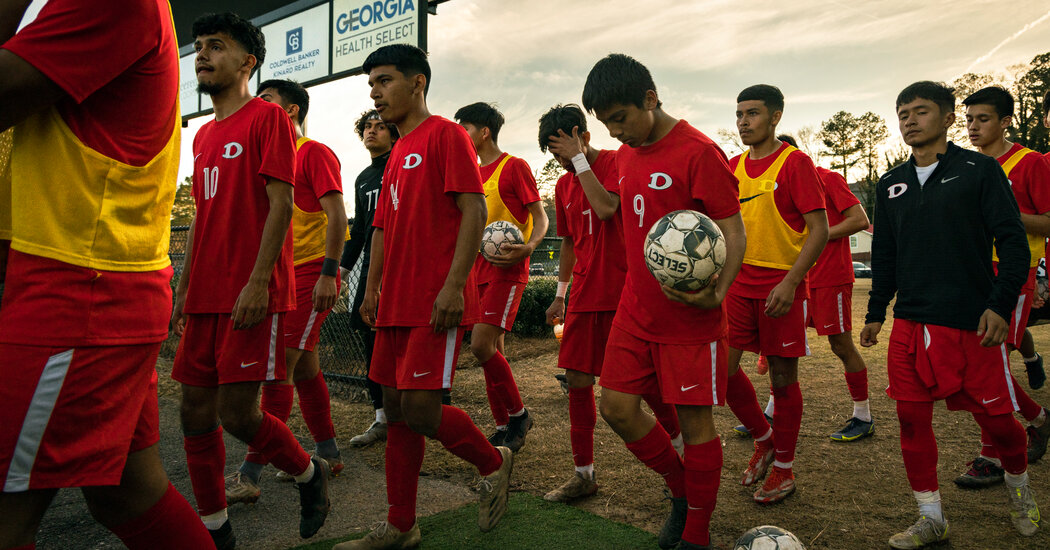 DALTON, Ga. — The old folks are mostly white and carry in boxes of pizza and portable stadium seats to prop up their backs. The young mothers are predominantly Hispanic, and some press sleeping babies against their chests. Students and fathers are here, too. Most of Whitfield County has packed into Bill Chappell Stadium for the event of the spring: El Clásico, the annual boys’ soccer showdown between the county rivals Dalton High School and Southeast Whitfield High School.

The match is a celebration of high-level soccer: Each team reigns as a state champion in its class and is ranked in the top 10 nationally. But the game has a deeper significance: It shows how immigration and a white-and-black soccer ball have transformed this city in the Appalachian foothills of Georgia.

To understand what this place has become, look to the soccer field, where for 80 minutes the two teams performed a frenetic ballet, with the ball rocketing from one seemingly Velcroed foot to another. The only person on either team who was not Latino was Dalton Coach Matt Cheaves, who came here 28 years ago to evangelize soccer and found disciples in first-generation immigrants who were raised on the game.

Tune in to “Monday Night Fútbol,” a high school recap program on WDNN, or study the mural on the side of the Oakwood Cafe, with its illustrated history of Dalton, which has long been known as “the carpet capital of the world.” (More than 80 percent of the tufted carpet manufactured in the United States is produced in and around Dalton.) Catherine Evans Whitener, commonly referred to as Dalton’s first lady of carpet, is depicted on the mural, but so is a soccer goalie.

Or visit James Brown Park, where “the cages,” as the retrofitted tennis courts are known, are packed with 6-, 8- and 10-year-olds playing rapid-fire soccer matches to five. Winners stay on.

Only then will you understand how this town of nearly 35,000 — now 53 percent Hispanic — became an unlikely center for America’s slow tilt toward soccer and why it now calls itself Soccer Town U.S.A.

It may not be as chest-puffing as the title of “home to more millionaires per capita than any other city in the United States,” which Dalton held in the 1970s. It is not as sexy as “the hometown of the killer blondes,” as a headline in The Washington Post proclaimed in 1990 when a favorite daughter, Marla Maples, was involved with a married New York developer named Donald J. Trump.

Still, this new identity was hard-earned, not only on the soccer fields but also on the factory floors, town halls and neighborhoods whose demographics were upended.

“We came here to work in the mills,” said Juan Azua, a field services consultant whose family was among the first half-dozen Hispanic families to come here in the 1970s. “My parents called their brothers and cousins and told them there was work here. It was like, boom, another wave slammed into town and kept coming.”

Immigrant workers who were wanted in the mills in good times were not so welcome when jobs became scarcer. After the Great Recession, Georgia passed a law creating the Immigration Enforcement Review Board to investigate citizen complaints about municipalities not enforcing immigration laws. Sheriffs used roadblocks to snare people without papers and handed them over to the federal government for deportation.

America Gruner, president of the Coalition of Latino Leaders in Dalton, said hundreds of undocumented families left town from 2009 to 2012. Thirty percent of the Hispanic population remains unauthorized, she said.

“It was a sort of ghost town because people were afraid of being stopped, detained and deported,” Gruner said. “It was hardest on the children who were frightened that their parents would be sent away and they’d have to stay here.”

Georgia has since abandoned the Immigration Enforcement Review Board, but Gruner said anti-immigrant sentiments persist in Whitfield County, where Trump won 70 percent of the vote in the 2016 and 2020 presidential elections.

“I couldn’t imagine a soccer field being built a couple of years ago,” Gruner said. “We felt the anti-immigrant feeling in sports and our culture. It’s changing little by little. It’s not perfect. We have a long way to go. But there is more understanding.”

Talent, Speed and a Work Ethic

Nearly 2,800 people are here on a warm Thursday night to see the Dalton High School Catamounts take on the Southeast Whitfield High School Raiders. The most famous Clásico, of course, is any match between F.C. Barcelona and Real Madrid, but the rivalry here is also intense and pits cousins against cousins and club team players against one another.

On the sideline before the game, Cheaves is a soothing presence to his players. His ball cap is pulled down low, his encouragements uttered softly with a Southern lilt. He fell in love with soccer as a 5-year-old and played in high school and at the college club level.

“I thought it was a blast the first time I kicked the ball,” Cheaves said. “I was good at it and thought I had something to contribute.”

He arrived here in the summer of 1994 with a degree in health and physical education from the University of West Georgia. He had hopes of making a difference as a soccer coach, making him an outlier in a state where football is king.

“I grew up with old coaches who’d tell you that you were playing a Communist sport,” Cheaves said.

Within days of his arrival, he discovered Dalton Soccer League, known informally as the Mexican league. On a field near the high school, Cheaves watched two teams of middle school students exchange nifty passes as if the ball were on a rope.

“There was talent, plenty of speed and a work ethic,” he said. “I didn’t have to develop fundamental skill, but just keep them sharp.”

The challenge was getting them to come out for the high school team.

Cheaves’s first team had six Hispanic players. One was Roy Alvarran, 43, the son of migrant workers who picked oranges and peaches for 50 cents a bag before they found steady, salaried work in Dalton. Alvarran loved soccer but felt pressure to follow what he called “the Mexican route.” High school athletics and college ambitions were not on that route, he said.

“You finish school, get married, have a kid at 18 or 19 and go to work in the carpet mill,” Alvarran said. “The Mexican route — so that’s what I did.”

Alvarran, Azua and another friend, Todd Hudgins, are the unofficial historians of soccer in Whitfield County. They competed against each other in high school — Azua played for the Raiders, Hudgins for Northwest Whitfield High School. Together, they host “Monday Night Fútbol.”

Leaning over the chain link fence on the sideline, the friends were still competing as they reminisced.

“The last three times we played Dalton it ended in ties,” said Azua, whose cousin is the head coach of Southeast Whitfield’s team.

“A tie is like a loss to us,” said Alvarran, the current president of Dalton Soccer League.

Dalton High School’s history is rich. The Catamounts made the playoffs in Cheaves and Alvarran’s first season. The next year, a few more Hispanic players showed up for tryouts, and a few more each year after that. In 2003, Dalton won the school’s first state soccer championship with an all-Hispanic team.

So did state titles: The Catamounts were 64-0 over three undefeated seasons that ended with titles, in 2013, 2014 and 2015. In 2019, they were undefeated in 23 games, earning their fifth title and ending the season ranked No. 1 nationally. Covid-19 ended the 2020 season, but Dalton came back last year to add a sixth championship.

Along the way, Cheaves passed up opportunities to go on to bigger jobs. “I didn’t want to bounce around,” he said. “I wanted to make a difference in life. I like seeing guys around town and what they have done.”

The success of Dalton’s soccer program has transformed expectations beyond the field.

In the last four years, Dalton has sent more than a dozen players to college on scholarships, including one who went to Wake Forest.

Alvarran’s son, Jacob, a senior on the Catamounts, hopes to play at Dalton State. Roy Alvarran never went to college, but he left the mills and now sells insurance.

“I want him to keep on going to school, not to jump into the carpet mill,” Alvarran said. “You can’t hate on it because they’re making $15-plus an hour. It saved my family, but there’s other ways to make money.”

The stability offered by a regular paycheck at companies like Shaw and Mohawk Industries retains a powerful hold on the newer Daltonians. But now many are focused on a different path.

“Every kid on this field could play in college at some level,” Azua said. “They all have the opportunity. The question is will they take that offer? And will their parents let them?”

“Our Community,” the mural on the side of the Oakwood Cafe in downtown Dalton, is the work of Mayelli Meza, whose family emigrated from Mexico. It was unveiled in early March after the artist spent four months on a ladder with brush in hand. Meza’s commission was to depict Dalton’s past, present and future.

Included are the first lady of carpet; carpet rolls; a kayaker, for the town’s love of the outdoors; and a train, for the impact the railroads had on extending Georgia’s multibillion-dollar textile industry.

Two prominent elements are more personal to Meza. To evoke the diversity and female empowerment taking hold in her town, she included teenage girls — white, Black, Hispanic, Indian and Asian.

Then there is the teenage goalkeeper.

“That’s my son, Isaac,” Meza said, watching nervously from the fence as the final minutes of this Clásico ticked away.

With his diving saves and last-minute deflections, Isaac Meza stayed a step ahead of the Raiders for 78 minutes, and Dalton High School was ahead, 3-1. But Southeast Whitfield conceded nothing, and with 1 minute 14 seconds left, the Raiders’ Nathan Villanueva got behind Dalton’s defense. Meza lunged forward, but the ball sailed past him.

His mother grimaced and the Southeast Whitfield grandstand erupted — it was 3-2, and the Raiders were still alive.

With 18 seconds left, the Raiders’ Angel Garcia stepped up for a free kick. He arced a shot over the wall of Catamounts standing sentinel in front of the goal. The ball hooked left. Meza leaped. His fingers brushed the ball, but it landed softly in the corner of the net.

In soccer parlance, Garcia had delivered a perfect upper 90.

Mayelli Meza headed off to hug her muse. For the fourth consecutive time, El Clásico had ended in a tie.

The next morning, Alvarran managed to remain in good spirits. It was not the triumphant ending he had hoped for. Instead, it was a perfect finish for the denizens of Soccer Town U.S.A.

“I’ll have to hear that we tied for an entire year,” he said. “This game is what we look forward to every season, and the kids from both teams never fail us. Both teams are very good, but when they play each other, they bring out the best in each other. I hope you got to see how this rivalry is so passionately played, but also how it unites our community.”