In Kyiv, a Soldier’s Funeral and Vows of Defiance 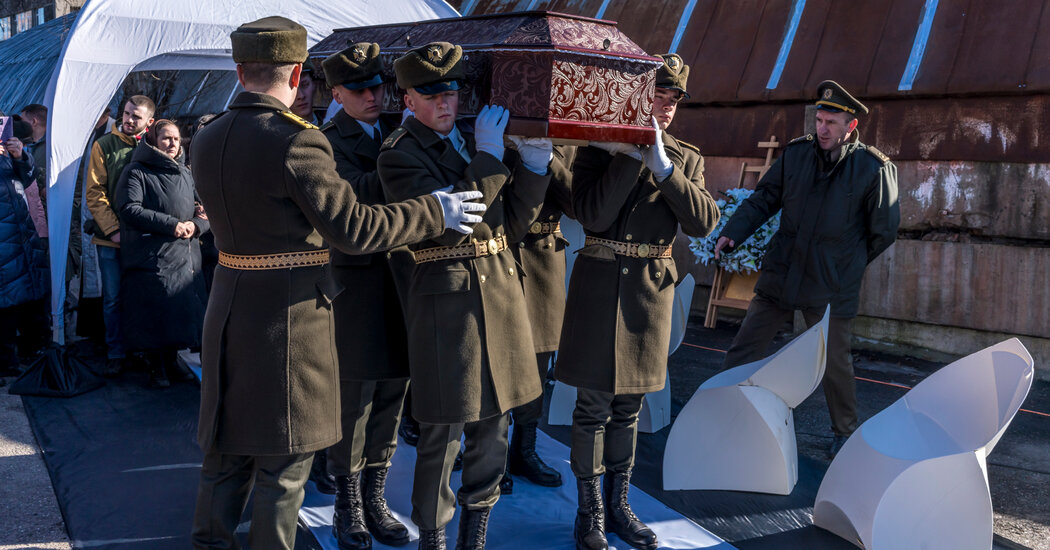 KYIV, Ukraine — At a cemetery lined by fir trees in central Kyiv, mourners paid their final respects on Tuesday to Capt. Anton Sidorov, who was arrayed in his army fatigues in a casket.

“Glory to Ukraine!” said one of Mr. Sidorov’s comrades. “Glory to the heroes!” came the solemn response from the group of mourners, which included dozens of soldiers.

Captain Sidorov, 35, was killed on Saturday in eastern Ukraine, near the front line separating government-held territory from breakaway areas backed by Moscow. He was one of the first casualties in a drastic escalation in tensions between Russia and Ukraine that led President Vladimir V. Putin to recognize the so-called Donetsk and Luhansk People’s Republics in Ukraine’s east on Monday, paving the way for sending Russian troops to the region.

The funeral reflected the dual emotions coursing through Kyiv, Ukraine’s capital, as Mr. Putin received approval for the use of military force from his Parliament, heightening the anticipation of war against Ukraine. Citizens in Kyiv were somber but defiant. They have been preparing for a possible military escalation by Russia for months, with many civilians joining territorial defense units across the country and receiving military training.

On Tuesday morning, the day after Mr. Putin gave a menacing speech in which he denigrated Ukraine’s history and threatened “bloodshed,” there were lines outside of recruitment centers.

But on the streets and on social media, daily life was mostly proceeding as normal. There was no widespread panic buying in grocery stores or lining up at ATMs. Public figures and celebrities took to social media to express pride in their country with the unflappable conviction of being on the right side of history.

“Fear and panic are the best allies of a crazy dwarf!” wrote TV presenter Yuri Gorbunov on Facebook, one of many posts trying to disparage Mr. Putin rather than expressing fear of his powerful military.

Still, some Ukrainians are quietly making contingency plans. Some Kyiv residents were dropping off their pets at animal shelters as they prepared to leave the city for western Ukraine, or to go abroad. Many others were making arrangements to defend their country. Some military and hunting supply stores in the city said they had already run out of weapons.

“We’re keeping calm and just getting our guns ready,” said Serhiy Kolisnyk, 45, who was wounded while fighting Russia-backed separatists in the coastal city of Mariupol in 2015.

“We know what the possible vectors of attack are, and we will join the armed forces when we are called upon,” Mr. Kolisnyk said, sitting with two fellow veterans at a wall commemorating soldiers who have died.

Artur Savoisky, the owner of Pyata Varta, a store that sells weapons in central Kyiv, described what he called “a lot of commotion’’ in recent days.

“People are buying weapons mostly for their own security, for their self-defense, to protect their homes,” he said.

His store still had some ammunition, because he had stocked up months ago.

Mr. Putin’s full plans for Russian troops are still unclear. But Ukraine’s defense minister, Oleksiy Reznikov, seemed to be preparing his soldiers for an escalation in a statement released by the military on Tuesday.

“Ahead will be a difficult trial,” Mr. Reznikov said. “There will be losses. You will have to go through pain and overcome fear and despondency.”

Many Ukrainians said they refused to allow the outright falsehoods and pugilistic rhetoric of Mr. Putin to intimidate them.

“Everything is OK,” said Eugene Okhrimenko, 33, a financial analyst in Kyiv, noting that Ukrainians have been living under the specter of a Russian threat since 2014, when Moscow fomented a separatist incursion in the East and annexed Crimea. “There is lots of anger, but no panic.”

Many Ukrainians expressed their frustration at the lack of response inside of Russia to Mr. Putin’s warmongering speech, in which he said that Ukraine “was created by Russia’’ and lamented the fact that it received independence after the collapse of the Soviet Union.

“I can’t explain the silence on the part of my friends and colleagues from ‘brotherly’ Russia,” Pavlo Varenytsa, the frontman of Epolets, a band from the southern city of Odessa, wrote on Facebook.

“Your silence will affect everyone — us, you, the whole world,” he wrote. “Your silence is a bullet aimed at all of us. As long as you are silent, evil is done by your hands.”

Ukraine’s president Volodymyr Zelensky has sought to maintain a measured tone in the face of Mr. Putin’s warmongering.

“We believe that there will be no powerful war against Ukraine and there will be no wide escalation on the part of the Russian Federation,” Mr. Zelensky said on Tuesday. He said he still believed it was possible to resolve the situation diplomatically.

“I would like to hear more determination from the president, an action plan for the nation,” said Olha Reshetylova, a human rights media coordinator.

“But in the end, I understand that we need to leave room for maneuver, and every harsh word, or even more action, significantly reduces the space,” she added. “The main thing is not to make critical mistakes.”

In Kyiv on Tuesday, the sun was shining and spring seemed near. But the war, and Mr. Putin’s menacing threats against their nation, suddenly seemed inescapable.

“I already have him in my dreams!” fruit seller Maryna Kovalenko said of the pugilistic Russian leader. “Of course it is worrying. We have children here. He will not stop.”

One of her customers, Vira Zavadska, approached to buy some fruit.

“It was unavoidable, we always knew it,” she told Ms. Kovalenko. “My daughter has been telling me to leave, but how can I live without our Ukraine? The war has already been here for eight years, and people are dying.”

“I am so sorry for our sons,” she added, alluding to the death Monday of two more Ukrainian soldiers.

“I just wish Putin would die.”

At Captain Sidorov’s funeral, one of his fellow soldiers said he and his colleagues were not alarmed by the prospect of an increased military incursion.

“I am ready to return to active service, or to be mobilized in territorial defense,” said the man, who gave his army nickname, Hopak. “We all are.”