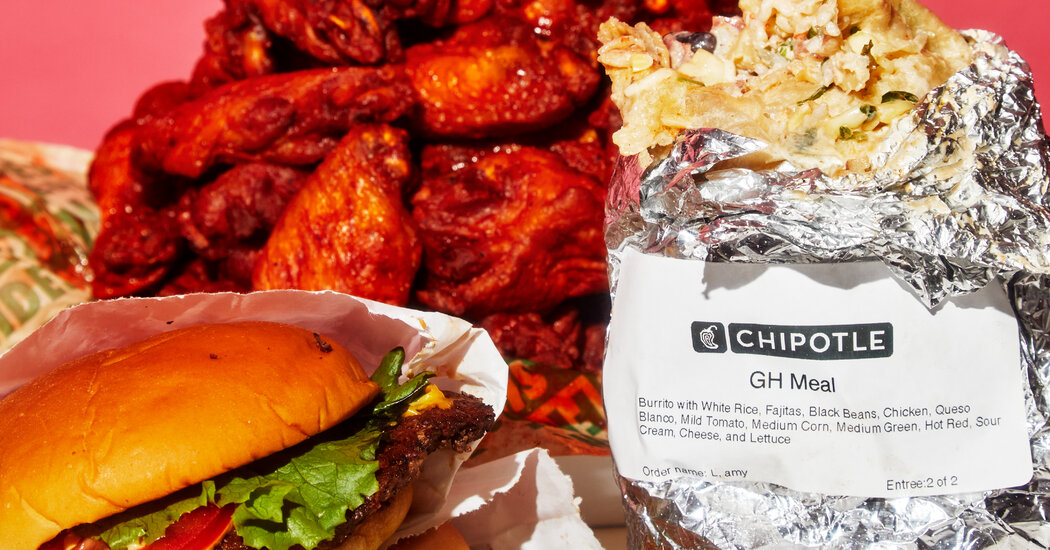 On a chilly Tuesday afternoon this month, James Marsh stopped by a Chipotle near his suburban Chicago home to grab something to eat.

It had been a while since Mr. Marsh had been to Chipotle — he estimated he goes five times a year — and he stopped cold when he saw the prices.

“I had been getting my usual, a steak burrito, which had been maybe in the mid-$8 range,” said Mr. Marsh, who trades stock options at his home in Hinsdale, Ill. “Now it was more than $9.”

“I figured I’d find something at home,” he said.

The pandemic has led to price spikes in everything from pizza slices in Manhattan to sides of beef in Colorado. And it has led to more expensive items on the menus at fast-food chains, traditionally establishments where people are used to grabbing a quick bite that doesn’t hurt their wallet.

Last year, the price of menu items at fast-food restaurants rose 8 percent, its biggest jump in more than 20 years, according to government data. And, in some cases, portions have shrunk.

“In recent years, most fast-food restaurants had, maybe, raised prices in the low single digits each year,” said Matthew Goodman, an analyst at M Science, an alternative data research and analytics firm. “What we’ve seen over the last six-plus months are restaurants being aggressive in pushing through prices.”

This comes at a time when the hypercompetitive fast-food market is booming.

Chains like McDonald’s, Chipotle and Wingstop were big winners of the pandemic as consumers, stuck at home working and tired of cooking multiple meals for their families, increasingly turned to them for convenient solutions. But in the past year, as the cost of ingredients rose and the average hourly wage increased 16 percent to $16.10 in November from a year earlier, according to government data, restaurants began to quietly bump up prices.

But making customers pay more for a burger or a burrito is a tricky art. For many restaurants, it involves complex algorithms and test markets. They need to walk a fine line between raising prices enough to cover expenses while not scaring away customers. Moreover, there isn’t a one-size-fits-all approach. Chains that are operated by franchisees typically allow individual owners to decide pricing. And national chains, like Chipotle and Shake Shack, charge different prices in various parts of the country.

When Carrols Restaurant Group, which operates more than 1,000 Burger Kings, raised prices in the second half of last year, the number of customers actually improved from the third to the fourth quarter. “Over time, we generally have not seen a whole lot of pushback from consumers” on the higher prices, Carrols’ chief executive, Daniel T. Accordino, told analysts at a conference in early January.

Menu prices are likely to continue to climb this year. Many restaurants say they are still paying higher wages to attract employees and expect food prices to rise.

“We expect unprecedented increases in our food basket costs versus 2021,” Ritch Allison, the chief executive of Domino’s Pizza, told Wall Street analysts at a conference this month. While Domino’s hasn’t raised prices, it is altering its promotions — offering the $7.99 pizza deal only to customers ordering online and shrinking the number of chicken wings in certain promotions to eight from 10 — in an effort to maintain profit margins.

Despite the higher food and labor costs, some restaurants are seeing sales and profits rebound past prepandemic levels.

When McDonald’s reports earnings this month, Wall Street analysts expect that its revenues will have hit a five-year high of more than $23 billion, a $2 billion increase from 2019. Net income is predicted to top $7 billion, up from $6 billion in 2019. Other chains like Cracker Barrel and Darden Restaurants, which owns Olive Garden and Longhorn Steakhouse, have resumed dividend payments or cash buybacks of stock after suspending those activities early in the pandemic to conserve cash.

And next month, when Chipotle reports results for 2021, analysts expect revenues to top $7.5 billion, a 34 percent jump from 2019. Net income is expected to almost double from prepandemic levels. In the third quarter, the company repurchased nearly $100 million of its stock. Chipotle declined to make an executive available for an interview, citing the quiet period ahead of its earnings release.

While Chipotle executives blamed higher labor costs for a 4 percent price increase in menu items this summer, the company has been looking for ways to boost its profitability.

One way was to charge higher prices for delivery. Delivery orders through vendors like DoorDash and Uber Eats exploded for Chipotle and other fast-food chains during the pandemic. But so did the commission fees that Chipotle paid the vendors. So in the fall of 2020, it began running tests to see what would happen if it raised the prices of burritos and guacamole and chips that customers ordered for delivery, executives told Wall Street analysts in an earnings call. It essentially meant the customer covered Chipotle’s side of the delivery costs.

The company discovered customers were willing to pay for the convenience of delivery. Now, customers ordering Chipotle for delivery pay about 21 percent more than if they had ordered and picked the food up in the stores, according to an analysis by Jeff Farmer, an analyst at Gordon Haskett Research Advisors.

“I would say that our ultimate goal, so this would be over the long term, maybe the medium term, is to fully protect our margins,” said Jack Hartung, the chief financial officer of Chipotle, on a call with Wall Street analysts last fall. “When you look at our pricing versus other restaurant companies’ for the quality of the food, the quantity of the food, and the quality and convenience of the experience, we offer great value. So we believe we have room to fully protect the margin.”

That doesn’t mean customers are thrilled about the extra costs.

This month, Jacob Herlin, a data scientist in Lakewood, Colo., placed an order: a steak-and-guacamole burrito for $11.95, a Coca-Cola for $3, and chips and guacamole, which were free with a birthday coupon. The total was $14.95, before tax.

But when he clicked to have the food delivered, the price for the burrito jumped to $14.45 and the soda climbed to $3.65, bringing the total to $18.10 before tax, 21 percent more than if he had picked the food up himself.

There was more. Mr. Herlin was charged a delivery fee of $1 and another “service fee” of $2.32, bringing the total for the delivered meal to $23.20. He tipped the driver an additional $3.

Mr. Herlin said he did not mind paying for delivery and wanted drivers to be paid a decent wage. But he felt that Chipotle wasn’t being upfront with customers about the added costs.

“They’re basically hiding the fees two different ways, through that base price increase and through the hidden ‘service fee,’” Mr. Herlin said in an email. “I would very much prefer if they had the same pricing and were just honest about a $5 delivery fee.”