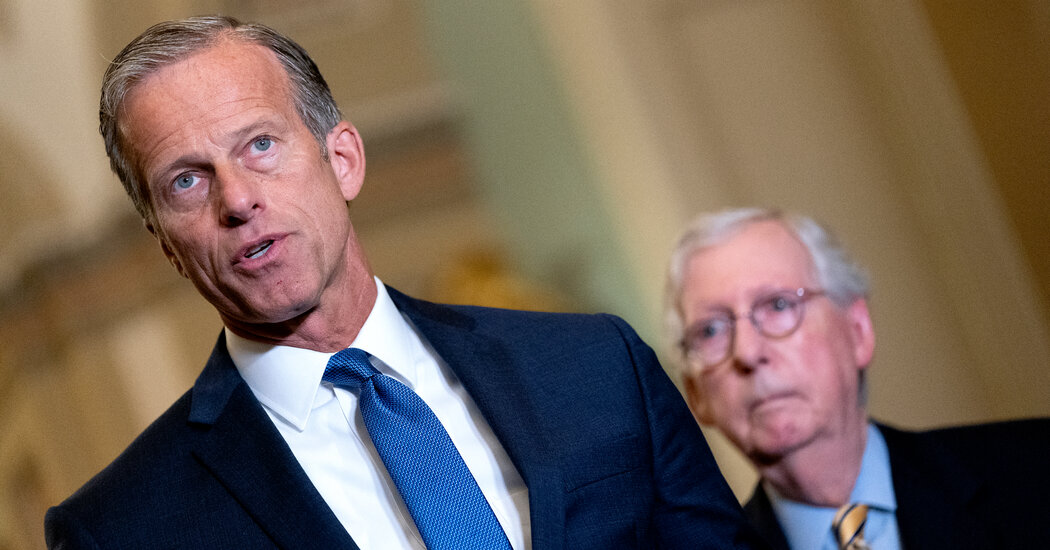 Mr. Graham, who along with Mr. Thune and Ms. Collins is part of a small group of senators who often dine together in Washington, said that before they left for the holidays, he had reassured Mr. Thune about any Trumpian intervention.

“I told John that’ll be fine,” Mr. Graham recalled. “John will be fine.”

Asked if he thought the threat of a Trump-inspired primary bothered Mr. Thune, Mr. McConnell said, “No. No, I don’t.”

But if Mr. Thune ascended to Republican Senate leadership, Mr. Trump could still prove a headache.

The former president does not have the influence in the Senate, where 19 Republicans defied him to support the infrastructure bill, that he does in the House. Yet Mr. Trump’s regular attacks on Mr. McConnell and on anything that has the air of cooperation with President Biden are not lost on Senate Republicans.

A handful of them whose seats are up in 2022, including Mr. Thune, opposed the infrastructure bill after the former president’s relentless criticism of the bipartisan measure made it difficult for Senate leaders to back the legislation.

Perhaps more significant regarding Mr. Trump’s future influence is the turnover in the Senate and the question of whether retiring mainstream Republicans, like Senators Richard Shelby of Alabama, Rob Portman of Ohio and Roy Blunt of Missouri, will be replaced by Trump acolytes.

“We’ve just got to plow through this to the post-Donald Trump era, which I believe is coming,” Ms. Collins said, lamenting that the former president’s “haranguing the leader, Mitch, has gotten worse lately.”

If Mr. Thune left, she said, she would “truly be beside myself.”

Echoing Ms. Collins, if not as unequivocally, about why Mr. Thune should stay, Mr. Graham and Mr. Cramer both said he could eventually succeed Mr. McConnell, who will be 80 in February. Mr. Cramer said that Mr. Thune’s ascension would not happen “by default” but that “it would be really good for the farm belt.”