Melee Erupts Between Migrants in Belarus and Polish Border Forces 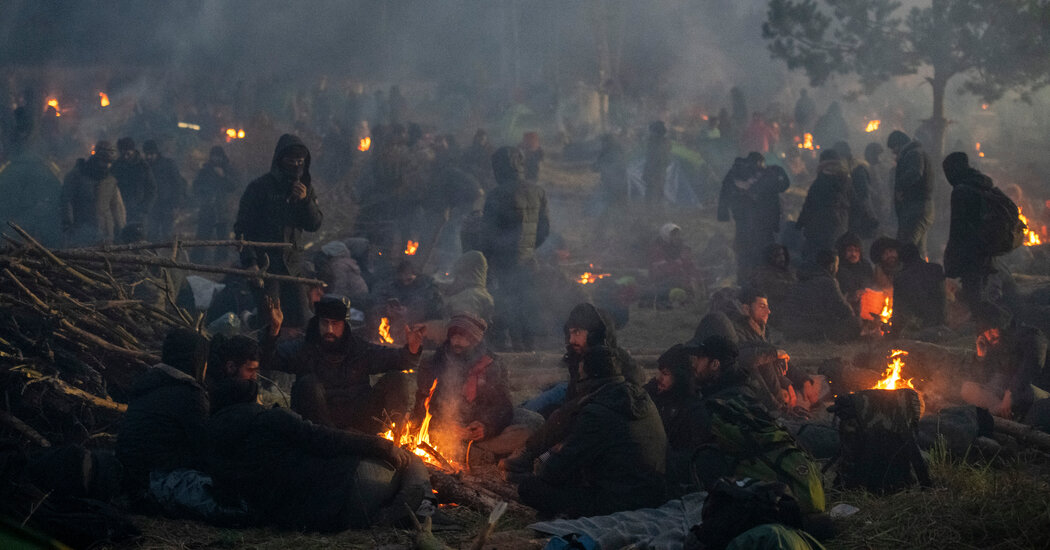 BRUZGI, Belarus — He has spent 28 nights, each colder than the one before, choking on campfire smoke and despair on Europe’s doorstep. He made it across the razor wire into Poland three times, only to be grabbed in the forest and forced back into Belarus. His visa for Belarus expired 12 days ago, leaving him at the mercy of a repressive police state.

On Tuesday, Rawand Akram, a 23-year-old Kurd from Iraq, snapped.

He and hundreds of other desperate and increasingly angry migrants, marooned at the border — and egged on, he said, by Belarusian security officials — stampeded toward a frontier checkpoint, hurling stones and debris at Polish security forces massed just a few yards away. What began around noon as just another attempt to breach the border fence spiraled into a dangerous melee, and Polish officers responded with volleys from water cannons and blasts of tear gas.

“I am angry. Everyone is angry. This is the last thing we could do. There is no other solution if we ever want to get to Europe,” Mr. Akram said.

Hours later, Belarus border guards suddenly began moving hundreds of migrants from their frozen encampment to the shelter of a nearby warehouse. It was not immediately clear what plans the authorities had for those they were moving, but many feared that the relocation was a prelude to deportation, not just a humane gesture.

Tuesday’s clash, the worst in a monthslong impasse on the European Union’s eastern flank, underscored the perils of a standoff between Belarus, a close ally of Russia, and Poland, a member of NATO and the European Union, each determined not to bend. At least 11 people have died at the border in recent weeks.

“We are just a stick that they are beating each other with,” said Mr. Akram. “We are in the middle of their fight.”

He said Belarusian security officers had instigated the melee by telling migrants stranded in a fetid, frozen encampment just yards from Poland that Warsaw’s hard-line nationalist government would never let them enter unless forced to do so.

But he also blamed Poland for putting its determination to resist pressure from Belarus’ authoritarian leader, Aleksandr G. Lukashenko, ahead of the lives of desperate people.

“Nobody wants to look weak,” he said. “We have become a ball kicked about in their big political game.”

E.U. officials have called the crisis a “hybrid war” engineered by Mr. Lukashenko to punish Poland for sheltering some of his most outspoken opponents and pressure the bloc into lifting sanctions on his country. Belarus insists, for its part, that it is a humanitarian catastrophe created by Europe’s refusal to abide by international law and give people fleeing war and despair the right to at least apply for asylum.

To give some credence to its own version of events, Belarus has allowed a few foreign news organizations, including The New York Times, to visit the border and witness the squalor and desperation. Poland, eager to keep despair out of the public eye, has sealed off its own side of the border, barring aid workers, journalists and even doctors from getting within miles of the scene of Tuesday’s troubles.

Instead, Warsaw has left it to government officials to describe events and blame Belarus for all the suffering. “The entire aggressive behavior is coordinated by Belarusian services and monitored by drones,” the Polish authorities said, posting videos of the confrontations. They said a police officer was seriously injured and was being treated at a hospital for what was believed to be a skull fracture.

A migrant on the Belarusian side lost consciousness, apparently after being hit by a blast from a Polish water cannon, four of which are lined up by a closed border checkpoint decorated with emblems of the European Union and Poland.

Poland’s tough stance — “we are not talking about a humanitarian crisis but a threat,” the head of the National Security Bureau said over the weekend — has won strong support from its allies. The European Union decided on Monday to expand sanctions imposed on Belarus earlier this year, after Mr. Lukashenko’s military forced down a passenger plane carrying a prominent dissident.

Warsaw’s hard line has also played well at home, particularly among supporters of Poland’s governing party, Law and Justice. The Polish national bank announced this week that it would issue new commemorative coins and notes to honor “the defense of the Polish eastern border.”

But the Polish government has come under criticism from humanitarian organizations for a legal amendment it passed in October that allows migrants to be pushed back at the border and for asylum claims made by those who entered illegally to be ignored.

Foreign Minister Sergey Lavrov of Russia on Tuesday called Polish forces’ treatment of migrants “absolutely unacceptable.” Mr. Lavrov said at a news conference that the forces “violate all conceivable norms of international humanitarian law and other agreements of the international community.”

Belarusian authorities have silenced nearly all independent voices since a contested presidential election last year that was widely viewed as rigged. But they have become more open to scrutiny at the border than Poland, a democracy with a vibrant media, now blindfolded in the border zone.

Jens Stoltenberg, NATO’s secretary general, said on Tuesday that the alliance was “deeply concerned about the way the Lukashenko regime is using vulnerable migrants as a hybrid tactic against other countries, and this is actually putting the life of the migrants at risk.”

There are limits, however, to how far Mr. Lukashenko can ratchet up tensions and even some signs that he may be trying to dial them down. The flow of migrants is slowing as airlines either halt flights to Minsk, the Belarusian capital, or ban Iraqi and Syrian passengers.

In Minsk early Tuesday, scores of migrants were still staying at the Yubileiny Hotel, operated by the president’s property department, but some said they had been forced to check out and feared expulsion.

The Lukashenko government has denied allegations, including from the United States, that it has engineered the crisis and is directing the movement of the migrants.

“We cannot let this so-called problem lead to heated confrontation,” Mr. Lukashenko told a government meeting on Tuesday, according to Belta, the state news agency.

“The main thing now is to protect our country and our people, and not to allow clashes,” he added. Belarus said it was investigating the actions of Polish border guards but avoided its previous belligerent talk of an imminent attack by NATO.

The Iraqi government is organizing an evacuation flight for later this week from Minsk back to Iraq.

“I would rather die here in the cold than go back to Iraq,” said Rekar Hamid, a 32-year-old Iraqi Kurd who spent around $10,000 to get himself, his wife and 2-year-old son to the edge of the E.U. and still hopes to make it the last few yards. He sleeps in a flimsy green tent beside the road to the border checkpoint. Behind it sprawls an apocalyptic vista of campfires and shivering people in filthy clothes.

Belarus’s border guards estimate that there are at least 2,000 people stranded in the Bruzgi area.

The decision to shelter some migrants in a warehouse on Tuesday could signal that Belarus wants to ease border tensions. Some of those who walked to the warehouse — through a narrow corridor guarded by Belarusian soldiers with automatic weapons — seemed to be giving up.

Bilal, 23, a migrant from Iraq who would only provide his first name said: “It is too impossible to get to Europe, we want to go home.”

Mr. Akram, too, said he had enough, despite having spent $4,700 to get within yards of his goal. With temperatures at night dropping to below freezing, he said he could not face any more days waking up feeling like a mummy trapped in a sleeping bag stiff with ice. “It is finished, all finished,” he said.

But as night fell, hundreds of others could still be seen in the open near the border crossing, dragging wooden logs and straw as they prepared for another freezing night.