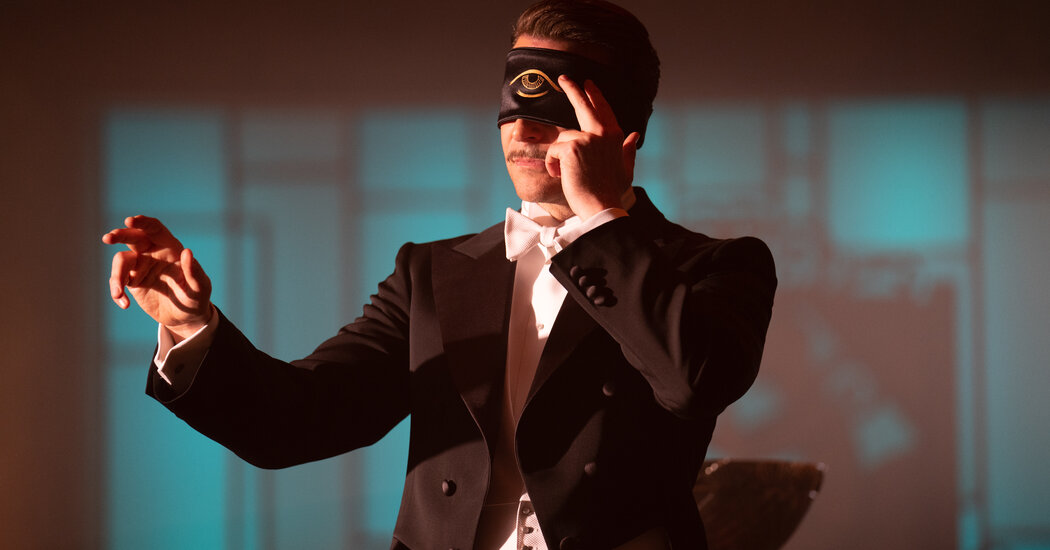 Festooned with gargoyles, Guillermo del Toro’s “Nightmare Alley” gets its game on in the sleazoid world of 1930s back-road carnivals. There, amid worn tents and garishly painted signs, a psychic reads gullible minds and a contortionist twists like a soft pretzel. The whole thing seems like fertile ground for del Toro, who’s drawn to the stranger, spookier corners of the imagination. So when a carnival barker promises a crowd a good show it is easy to imagine del Toro nodding along as he murmurs, Step right this way, folks.

You get why Stan (Bradley Cooper) looks all agog when he wanders in. As a filmmaker, del Toro likes to lay an overflowing table, and there’s a lot to take in at the carnival, like the pickled baby, baptized Cyclops Boy; and a poor soul called the Geek, an ostensible wild man who bites the heads off chickens. It’s icky — that’s the idea. Stan has empty pockets and a mysterious past, and while others might run screaming, he soon joins the show’s roster of creepy and putatively charming charlatans. He proves a natural hustler and, as the story evolves, his grifting grows more sophisticated, lucrative and dangerous.

You might have seen Tyrone Power navigating a similarly shadowy setup in the 1947 noir of the same title, directed by Edmund Goulding. Like the earlier movie, del Toro’s is based on a novel by William Lindsay Gresham, a desperate, pitiless book filled with exotic slang and steeped in the soured milk of human unkindness. Written by del Toro and Kim Morgan, the new adaptation hews more faithfully to the novel, partly because it’s not constrained by Hollywood self-censorship. But fealty isn’t always a productive strategy, and while the first film greatly tempers the book’s shocks, it doesn’t sentimentalize the source material, as this one does.

Shortly after Stan becomes a carny, he begins cycling through women, beginning with a clairvoyant (Toni Collette) whose broken-down husband (David Strathairn) once had a successful mentalist act. The act uses a code that allows the performers to guess, more or less accurately, the answers to audience questions. It’s a perfect fit for an opportunist, which is a role that nicely suits Cooper, an actor who can let you see his characters’ internal whirring. Stan and another love interest (Rooney Mara) leave the carnival, taking the mentalist act on the nightclub circuit. They make bank and also meet a smooth number (Cate Blanchett) who steps out of a different, less engaging movie.

Cooper adds charisma and an anxious backbeat to the story, while the old-timey carnival gives the movie texture and novelty. Part of the queasy appeal of Gresham’s novel is that it vividly brings to life the kind of low-rent carnivals that once entertained audiences with so-called human oddities, people who were often just disabled or marginalized. However exploitative, these shows provided performers with wages and homes, a community like the one immortalized in Tod Browning’s scandalous 1932 film “Freaks,” a favorite of del Toro’s. The attraction to outsider realms like the one immortalized in that film runs deep for del Toro; if nothing else, movie shoots are themselves nomadic tribes of a kind.

Whatever his reasons, del Toro adores his monsters, and he’s right at home in the carnival, which he dotes on lovingly. He puts his frequent collaborator Ron Perlman in strongman tights, turns up the amperage on Willem Dafoe’s cadaverous smile and gives Collette time and space to leave an impression. Collette’s scenes with Cooper send out electric sparks, generating heat that briefly takes the chill off Stan and draws you to him. Their scenes also give Cooper a chance to flesh out the character, a mystery that unravels scene by scene. You miss Colette when her character exits, which happens all too fast because Stan has other places to go and more people to cheat.

As del Toro peers into the carnival’s corners, he also folds in one of the movie’s recurring motifs: eyes. “Nightmare Alley” turns on the logic of the visible: what Stan sees and doesn’t, what patrons (you included) see and don’t. In the carnival (and in movies), seeing is believing, including in illusions, yet at what cost? Early on, Stan stumbles into an attraction decorated with eyes, an echo of Salvador Dalí’s designs for the Hitchcock film “Spellbound.” Later, when Stan develops his mentalist act, he wears a blindfold decorated with a single eye, evoking the Cyclops Boy. By the time he meets a shrink, Dr. Lilith Ritter (Blanchett), it is obvious that what Stan can never really see is himself.

Del Toro is a world builder, but he can have a tough time bringing his creations to life, which is the case here despite the hard work of his fine cast. The carnival is diverting, and del Toro’s fondness for its denizens helps put a human face on these purported freaks. But once he’s finished with the preliminaries, he struggles to make the many striking parts cohere into a living, breathing whole. It’s as if, after opening his cabinet of curiosities, he expected you to continue gazing appreciatively at his collection of wonders alongside him. And while it is a nice display — everything gleams, having been lovingly polished and repolished — it’s also inert, more museological than cinematic.

The problem is that this display is in service to a drama that needs narrative tension and modulation to fully work. The scenes with Lilith are particularly crucial in this respect, and also where the movie’s already logy pulse slows to a crawl. It’s no surprise that Blanchett makes quite the spectacle — she doesn’t walk and sit, she slinks and drapes — yet the performance is so mannered and self-consciously indebted to noir sirens of the past that you can almost see the quote marks framing it. In theory, Lilith should be a sharp foil for Stan. But she isn’t a character, she is a cineaste’s nostalgic plaything, and like too much of this movie she is less bathed in del Toro’s love than embalmed in it.