On the Edge of a Polish Forest, Where Some of Putin’s Darkest Fears Lurk 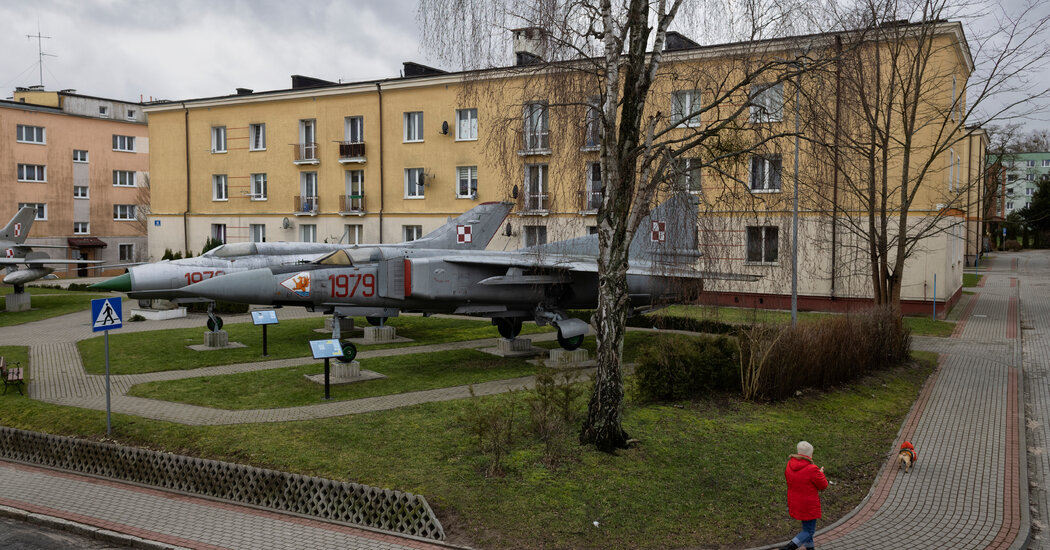 REDZIKOWO, Poland — Tomasz Czescik, a Polish archaeologist and television journalist, walks his dog each morning through a forest near his home here on NATO’s eastern flank, wandering along the edge of a green chain-link fence topped with razor wire.

He enjoys the fresh air and morning quiet — until loudspeakers on the other side of the fence, strung with “Keep Out” signs in Polish, English, German and Russian, start blasting “The Star -Spangled Banner” at high volume.

“I don’t know anyone who has ever been inside there,” Mr. Czescik said, pointing across the fence toward a cluster of haze-shrouded buildings in the distance.

The fence is the outer perimeter, guarded by Polish soldiers, of a highly sensitive U.S. military installation, expected to be operational this year, which Washington insists will help defend Europe and the United States from ballistic missiles fired by rogue states like Iran.

But for President Vladimir V. Putin of Russia, the military base in Poland, and another in Romania, are evidence of what he sees as the threat posed by NATO’s eastward expansion — and part of his justification for his military encirclement of Ukraine. The Pentagon describes the two sites as defensive and unrelated to Russia, but the Kremlin believes they could be used to shoot down Russian rockets or to fire offensive cruise missiles at Moscow.

As he threatens Ukraine, Mr. Putin has demanded that NATO reduce its military footprint in Eastern and Central Europe — which Washington and European leaders have flatly refused to do. Mr. Putin has been fuming about American missiles near Russia’s border since the Romanian site went into operation in 2016, but the Polish facility, located near the village of Redzikowo, is only about 100 miles from Russian territory and barely 800 miles from Moscow itself.

“Are we deploying missiles near the U.S. border? No, we are not. It is the United States that has come to our home with its missiles and is already standing at our doorstep,” Mr. Putin said in December at his annual news conference.

On Wednesday, the march to war in Ukraine slowed a bit as Russia announced further troop withdrawals and Ukraine signaled a willingness to forgo its ambitions to join NATO, a critical issue in the current tensions with Moscow.

The Polish base, the heart of which is a system known as Aegis Ashore, contains sophisticated radars capable of tracking hostile missiles and guiding interceptor rockets to knock them out of the sky. It is also equipped with missile launchers known as MK 41s, which the Russians worry can be easily repurposed to fire offensive missiles like the Tomahawk.

For villagers in Redzikowo, the idea that they are living at the forefront of Mr. Putin’s oft-stated security concerns has already caused jitters for some local residents.

Ryszard Kwiatkowski, a civil engineer who works in construction, said a customer who reserved an apartment in a new block his company is building recently called to cancel her planned purchase because of worries that Russia could strike the missile defense facility at Redzikowo and send property values through the floor.

Nobody really thinks that is likely — it would put Russia into direct conflict with NATO, of which Poland has been a member since 1999. But assumptions of a unified and peaceful Europe that took hold with the end of the Cold War are crumbling as Russian troops mass on the border with Ukraine and the United States sends thousands of additional soldiers to Poland.

Mr. Kwiatkowski, who took part in protests against the American facility at Redzikowo when it was announced in 2016, said Russia had stoked unease by exaggerating the threat posed by NATO. But, he added, both sides have created “a self-propelling machine of fear” fueled by nerve-jangling uncertainty over what the other is up to.

Thomas Graham, who served as senior director for Russia on President George W. Bush’s National Security Council, said Moscow had never believed Washington’s assurances that its missile defense system was aimed at Iran, not Russia. The issue, he added, had become a powerful symbol for the Kremlin of a post-Cold War order that it views as dangerously one-sided and which it is now trying to revise through military threats.

“The current crisis is really much broader than Ukraine,” Mr. Graham said, “Ukraine is a leverage point but it is more about Poland, Romania and the Baltics. The Russians think it is time to revise the post-Cold War settlement in Europe in their favor.”

In a meeting with Mr. Putin on Monday, Russia’s foreign minister, Sergey V. Lavrov emphasized that Russia wanted to see “radical changes in the sphere of European security,” far-reaching changes that go beyond just Ukraine to include a pullback of NATO troops now in Eastern Europe, limits on the deployment of offensive weaponry and restrictions on intermediate range missiles.

Tomasz Smura, director of research at the Casimir Pulaski Foundation, a Warsaw research group, said, “This is a huge issue for Russia.”

But shutting down the Redzikowo site, as Moscow wants, he added, is a “red line” that the United States and Poland will not cross, though NATO, in response to a list of demands made by Moscow in December, recently offered discussion of an unspecified “transparency mechanism” in the hope of calming Russian concerns over the Polish and Romanian sites.

But Moscow wants much more than that.

Missile defense has long been viewed by Russia as a dangerous American attempt to degrade the main guarantor of its great power status — a vast nuclear arsenal. The possibility that the United States could shoot down Russian ballistic missiles undermines the deterrent doctrine of mutually assured destruction, which posits that neither of the two biggest nuclear powers would ever risk a nuclear war because it would mean both get annihilated.

During the Cold War, Russia and the United States both worked on developing antimissile defenses, but agreed in 1972 to abandon their rocket shield programs so as to preserve mutual vulnerability and, they hoped, peace.

It worked for nearly 30 years. But, at the end of Mr. Putin’s second year as president in December 2001, President George W. Bush infuriated the new Russian leader by pulling out of the 1972 Antiballistic Missile Treaty and directing the Pentagon to build a system to ward off the possible threat of missiles from Iran.

The U.S. withdrawal from what had been a cornerstone of superpower relations for decades has since been cited repeatedly by the Kremlin as the start of its disenchantment with the United States and Mr. Putin’s belief that Russian interests are being needlessly trampled.

“We tried for a long time to persuade our partners not to do this,” Mr. Putin said this month in the Kremlin. “Nevertheless, the U.S. did what it did — withdrew from the treaty. Now antiballistic missile launchers are deployed in Romania and are being set up in Poland.”

Should Ukraine draw closer to NATO, Mr. Putin thundered, “it will be filled with weapons. Modern offensive weapons will be deployed on its territory just like in Poland and Romania.”

The Aegis Ashore site in Romania has been operating for five years without incident, but Russia views the Polish missile defense facility, previously stalled by construction and other problems, as a more serious menace.

The weapons system was installed last summer in the facility, which is scheduled to start working sometime this year, Rear Admiral Tom Druggan, the program’s director, said in November. “It is specifically not focused on threats out of Russia, despite what they say,” he said.

American assurances that only Iran need worry, however, were undermined during the Trump administration when the president stated that U.S. missile defense systems would “detect and destroy any missile launched against the United States anywhere, anytime, anyplace.”

Washington has also struggled to convince Mr. Putin that its two missile defense sites in Eastern Europe do not also have an offensive capability that could easily be turned against Russian targets.

Responding to Russian complaints, NATO declared last month that interceptor missiles deployed at Aegis Ashore sites “cannot undermine Russian strategic deterrence capabilities” and “cannot be used for offensive purposes.” It added that the interceptors contained no explosives and could not hit ground targets, only airborne objects.

“In addition, the site lacks the software, the hardware and infrastructure needed to launch offensive missiles,” NATO said.

Some independent experts, however, believe that while requiring a rejiggering of software and other changes, the MK 41 launchers installed in Poland and Romania can fire not only defensive interceptors but also offensive missiles. Matt Korda, an analyst at the Federation of American Scientists, said that “without visual inspections, there is no way to determine whether or not this Tomahawk-specific hardware and software have been installed at the Aegis Ashore sites in Europe.”

So far only NATO military personnel have been allowed anywhere near the launchers or their control units. The U.S. Navy, which operates the Aegis Ashore site in Poland, did not respond to a request by The New York Times for a visit.

Beata Jurys, the elected head of Redzikowo, said she had never been inside the facility, installed on the grounds of a former Polish air force base and a shuttered civilian airport, and does not follow technical arguments over what missiles can be fired from behind the fence near her house.

But, no matter who is telling the truth, Ms. Jurys said, the finger-pointing by Moscow and Washington has made the village a potential target in the event of war.

“If something happens, we will be the first to know, unfortunately,” she said.