Piece by Piece, Russia’s Rationale for a Ukraine Invasion Is Put in Place 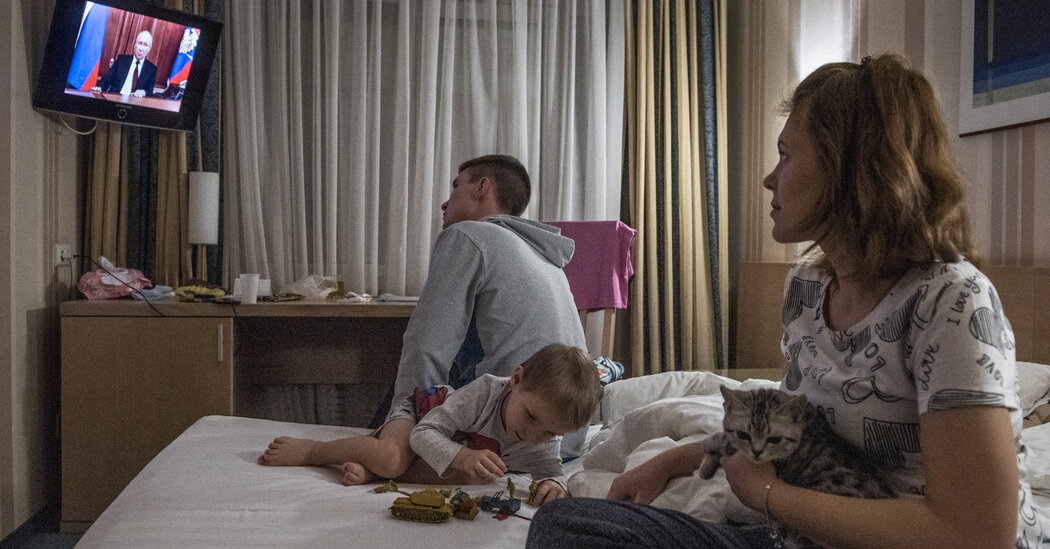 MOSCOW — Slumped in a chair, red tie askew, his staccato delivery emphasizing every grievance, President Vladimir V. Putin delivered a speech on Monday that sounded like a call to war.

It was also the culmination of a propaganda barrage orchestrated by Russian state media in recent days — a stark demonstration of how the Kremlin can use its dominance of the airwaves to lay the groundwork for a political decision that could cause widespread pain.

By Tuesday afternoon, Russia’s stock market had fallen again, leaving it some 20 percent down in less than a week, as businesses braced for damaging new Western sanctions. And the potential, far more tragic, costs if Mr. Putin were to go ahead with an invasion of Ukraine still appeared incalculable.

But to the millions of Russians watching television, the narrative of the last days has been completely different: Booms and flashes of artillery fire. Blurred-out footage of human remains. Women and children, crying and fleeing. A separatist appeal to the president. An emergency meeting of Mr. Putin’s Security Council. A dramatic address to the nation.

Then, last weekend, everything changed. From the occupied territory of Ukraine to the halls of the Kremlin, the rationale for a possible invasion was put into place, piece by piece, and presented to the Russian public in an unrelenting push on state television.

By Tuesday morning, the breakfast news on state-run Channel 1 was announcing a “historic moment.”

“Eight years of fear have ended,” the announcer declared, a reference to the residents of separatist-occupied eastern Ukraine who, in the Kremlin’s unfounded claims, are being subjected to “genocide” by Ukrainian forces.

“We absolutely must help those people,” said Margarita Kurdyukova, a 60-year-old pensioner in Moscow, explaining why she supported Mr. Putin’s decision. “Thank you to our government for at least getting the children and women out.”

Still, it is too soon to tell how most Russians would react to Mr. Putin’s moves; so far there is none of the widespread jubilation that accompanied his annexation of Crimea in 2014. On Tuesday, as Russian state media claimed that Ukraine was firing at the Russian-backed separatist regions whose independence Mr. Putin recognized on Monday, it remained unclear how far the Kremlin would go in escalating the conflict.

“Hundreds and soon, tens of thousands of Ukrainians and Russian citizens may die because of Putin,” Aleksei A. Navalny, the imprisoned opposition leader, posted on social media. “Sure, he won’t let Ukraine develop and will drag it into a swamp, but Russia will pay the same price.”

Lawmakers in the lower house of Parliament, the State Duma, hinted on Tuesday that the Kremlin’s campaign against the pro-Western government of President Volodymyr Zelensky of Ukraine would not end with Mr. Putin’s recognition of the separatist territories in eastern Ukraine’s Donbas region.

One nationalist deputy, Andrei Lugovoi, said he hoped that the recognition marked “the beginning of the return of all Ukraine to its historical bosom.” Another, Sergei Mironov, ripped into Mr. Zelensky as a “coward, liar and scoundrel.”

The angry, righteous tone was a continuation of the flurry of weekend news reports that aimed to paint an American-backed Ukraine as the aggressor — even though it insists it has no plans to mount an offensive against the separatist-held territories. State media seized upon Western warnings of a possible Russian invasion to paint the United States and its allies as warmongers.

On the marquee weekly news show on Russian state television, the host, Dmitri Kiselyov, on Sunday reeled off the international leaders he insisted could profit from war: Prime Minister Boris Johnson of Britain, President Emmanuel Macron of France and President Recep Tayyip Erdogan of Turkey.

“Everything is very serious,” Mr. Kiselyov warned. “Ukraine is literally being dragged into war with Russia.”

Later Sunday night, on a weekly show called “Moscow. Kremlin. Putin,” the president’s spokesman, Dmitri S. Peskov, reinforced the notion that while war may be coming, it would not be Russia’s choice.

“Let me remind you that Russia throughout all its history never attacked anyone,” Mr. Peskov said.

On Monday, Russian media broadcast separatist claims of an escalating assault by Ukrainian forces and broadcast an array of unsubstantiated claims — that Ukraine was shelling communications, bridges, a water filtration station and other infrastructure targets. Russian state television reported from the separatist-held city of Donetsk that Ukraine had sent saboteurs behind separatist lines.

On a YouTube channel run by another state television host, Vladimir Solovyov, a reporter on the ground in the separatist territory described the death of a local resident from Ukrainian shelling.

“He was torn to pieces,” he said. “There’s a genocide going on, people are being killed.”

Ukrainian officials insisted their military was not preparing an assault against Donetsk, and said the separatists were shelling their own territory.

“A great powerful information provocation is being waged against our state,” Mr. Danilov said. “But it is necessary to trust only official information.”

Footage of women and children fleeing the separatist territories tugged at heartstrings. On state television Monday, a reporter described government psychologists mobilizing to support the traumatized refugees who had left husbands and fathers behind.

“I would like to say hello to my Dad,” a young boy was shown saying.

Soon, state television showed video of the Russian-backed leaders of the separatist territories making appeals directly to Mr. Putin to recognize their independence, neatly leading into a special meeting of the Kremlin’s Security Council later that day.

The extraordinary, televised spectacle appeared designed to legitimize Mr. Putin’s fateful decision, casting his decision-making as deliberative and determined — a seeming rebuttal to critics who saw the president as more isolated than ever during the pandemic.

On Monday afternoon, Mr. Putin gathered his senior-most officials in the Kremlin’s cavernous Yekaterininsky Hall, presiding over the unscheduled, televised meeting of his Security Council. Because of Covid, he was seated at his own white table with gold trim, while the officials sat in chairs, arrayed in front of him.

“I would like to underline that I did not discuss anything in advance with any of you,” Mr. Putin said in the middle of the meeting, building the suspense as in a reality show. “What’s happening now is happening on a blank page because I wanted to learn your view without any advance preparation.”

Some officials appeared visibly nervous, while others made thinly veiled calls for a large-scale military offensive against Ukraine.

Mr. Putin repeatedly interrupted his foreign intelligence chief, Sergei Naryshkin, as he seemed to equivocate on whether or not to recognize the independence of the Russian-backed separatist republics in Ukraine’s east, prompting Mr. Naryshkin to stutter and then say he was in favor of annexing the territories.

“That’s not what we’re talking about,” Mr. Putin shot back.

To some Russians, the spectacle of the televised meeting underscored that they had no way of influencing decisions being made in the Kremlin.

“I understand that practically nothing depends on you in this situation,” said Dasha Kryshnikova, a 19-year-old architecture student, in central Moscow. “It’s very strange that a group of people is making a decision on behalf of the whole country.”

Until recently, it appeared that many Russians had tuned out talk of an impending war. Pollsters say that while the possibility of war is one of Russians’ greatest fears, no antiwar movement has emerged in recent weeks both because many simply can’t imagine it — or see how they can influence any decisions.

Russians “feel they can’t influence the process at all,” said Aleksandra Arkhipova, a Moscow social anthropologist, who found that there had been relatively little discussion of a possible war with Ukraine online before the propaganda barrage of recent days. “So they try to avoid it.”

On Sunday, a handful of activists unfurled antiwar posters in central Moscow’s Pushkin Square and were promptly arrested. One of the protesters, Lev Ponomarev, a Soviet-era human-rights activist, insisted that while for the moment many still could not imagine a war, most Russians would oppose it if it actually happened.

“There will be no support for this war,” Mr. Ponomarev said in an interview on Monday. “It will be the collapse of this regime.”