Risk for Leader of Belarus: Migrants He Lured May Want to Stay 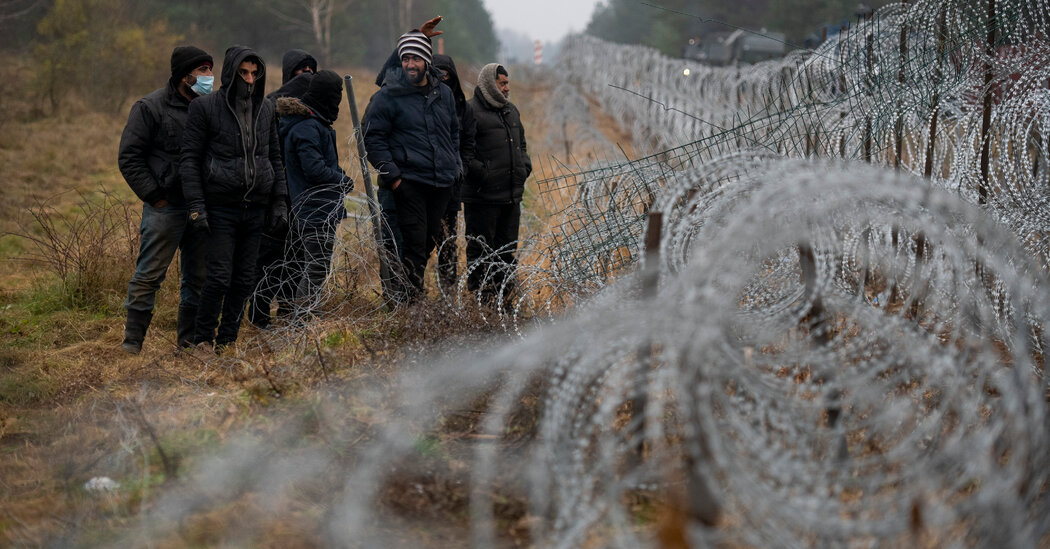 BRUZGI, Belarus — He has ruled with an iron fist for 27 years, surviving huge street protests, multiple rounds of Western sanctions and even alleged plots by his benefactor, Russia, to remove him.

But a threat President Aleksandr G. Lukashenko has never before had to contend with is now taking shape in a squalid migrant encampment along his country’s border with Poland. Having helped funnel desperate migrants to Europe’s doorstep, Mr. Lukashenko suddenly has to deal with people like Bale Nisu, a 21-year-old Kurd from Iraq who has taken a liking to Belarus, and would like to settle here.

Many of the more than 2,000 people marooned on the Belarusian side of the razor wire at Bruzgi, a large, shuttered border crossing, insist they won’t give up on trying to get into the European Union. But growing fears that they might instead get sent back to their home countries has made Mr. Nisu and others wonder whether staying put in Belarus could be their best option.

“I want to go to Germany, but if that is impossible, I’ll just stay here,” Mr. Nisu said Wednesday after moving into a big warehouse near the border that has been converted into a migrant holding center by the Belarusian authorities in an effort to release pressure on the border — and burnish the country’s often grim image.

He lamented that he had spent more than $4,000 and days freezing in the forest only to end up in a poor, highly repressive former Soviet republic with little to offer in the way of jobs and other opportunities.

But, showing rips in his pants, which he maintained were caused by Polish security forces beating him up after an abortive attempt to sneak across the frontier last week, he said that Belarus looked far more enticing than returning to Iraq, or more encounters with Polish soldiers and border guards. He said he wanted to apply for asylum in Belarus.

Dictators don’t usually have to worry about having their country praised, but Mr. Lukashenko, often described as “Europe’s last dictator,” could face a serious headache if migrants start demanding political asylum in Belarus. It is a predominantly Orthodox Christian nation with scant experience of taking in foreign immigrants and, like Poland and other East European countries, has been generally hostile to non-Christian settlers from outside Europe.

Belarus has spent weeks denouncing Poland for violating international law by refusing to consider asylum requests and pushing back migrants — mostly people fleeing poverty but some of whom have legitimate claims to asylum as refugees from war or persecution — who make it across the border.

But what Belarus presents as a humanitarian crisis is viewed by the European Union as the front line in a “hybrid war” engineered by Mr. Lukashenko to pressure Europe into lifting sanctions imposed after a contested presidential election last year.

After clashes at the Bruzgi crossing point on Tuesday, Polish forces massed just a few yards from the migrant encampment bombarded the Belarusian side with a recorded message giving a stern warning in English, which few of the migrants understand: “If you don’t follow orders, force may be used against you.”

Scores of migrants on Wednesday again pushed toward the razor wire that marks the frontier but did not break through. As evening fell, Polish border guards were uncoiling yet more razor wire near the spot where migrants briefly broke through on Tuesday.

Learn More About the Situation

With hope of getting into Poland and then Germany draining away, desperate parents sent a group of young girls to the razor wire to plead with Polish guards glowering just yards away. “I love you Poland,” they shouted in English. “Please Help Me. Please open the door.”

Jangi Rasul, a 36-year-old Iraqi Kurd, said he felt sorry for the Polish forces. “They are freezing like we are and are just following orders they get from politicians playing games,” he said.

Mr. Rasul sleeps in a small flimsy tent with his wife and three young children — they have only one sleeping bag — and said he was desperate to move on as the money he raised by selling the family’s car and furniture in Sulaimaniya, a city in northern Iraq, had nearly run out. He waved what he said was all he has left: 200 Belarusian rubles, about $80.

With Poland’s defense minister declaring on Wednesday that his country would fight “for months, if not years” to keep out migrants, the prospects for those hoping to enter the European Union through Belarus dimmed further and left Mr. Lukashenko with a dilemma: what to do with the thousands of people his country has allowed in but who now can’t get out?

On a visit to Warsaw last month, Svetlana Tikhanovskaya, the exiled leader of the Belarus opposition, said that between 10,000 to 15,000 migrants had already arrived in her country and would become “a huge problem for Lukashenko” if they got stuck in Belarus.

“He has to deal with all these people somehow,” she said.

It is not clear where those numbers stand now, but they have clearly been growing rapidly over the past month, though the flow has slowed considerably in recent days as airlines halted flights to Minsk, the Belarusian capital, or barred passengers from selected countries like Iraq, Syria and Yemen.

Asked how Belarus would respond to requests for asylum, Yuri Karayev, a former interior minister who is now an aide to Mr. Lukashenko responsible for the border region of Grodno, expressed surprise on Wednesday that anyone would really want to settle in Belarus. He said he did not know how the government would respond to asylum requests.

“I’m of course happy if people like it here, but what happens depends on a decision from the president,” he said in an interview during a visit to the newly opened holding center for migrants just outside the Bruzgi border zone.

Mr. Karayev dismissed accusations by the European Union that Belarus had orchestrated the migrant crisis, saying that people had arrived from countries like Iraq of their own accord, flying in on tourist visas that entitled them to roam around the country at will. “We have nothing to do with this crisis,” he said.

He said the government was trying to ease tensions by moving migrants from the border fence. The real culprit, he said, is German Chancellor Angela Merkel, who declared her country open to migrants in 2015.

Around 1,100 people, Mr. Karayev said, have already moved to the new holding center. The 800 or so remaining in an encampment that migrants call “the jungle” will be urged to join them in the warehouse, where there is food, bedding, electricity for people to charge their phones and shelter from the biting cold.

Dariya Ibrahim Mohammed, one of those who agreed to move, said he was distraught “after spending so much money and only getting frozen.” He said he would request asylum in Belarus if that was the only way to avoid getting sent back to Iraq.

Another Iraqi, Shajwan Mohammed, said she would like to stay in Belarus with her husband if the doors to the European Union remain closed. Exhausted after nearly a month on the road, much of it in the forests that straddle the border with Poland, she said Belarus was not her first choice but “it is much better than going back to Iraq.”

Migrants offer different accounts of the role played by Belarusian security officials in the crisis. Some say they were led to weak points in the border fence and even provided with wires cutters. Others say they organized their own forays into Poland with no help from Belarus.

Aso Ahmed, a 25-year-old Kurd from Iraq, said he had joined two attempts to storm the border en masse, the more recent of which on Tuesday led to violent clashes with Polish border guards, who unleashed water cannons and tear gas after being pelted with stones and debris. The efforts, he said, were organized by the migrants, not the Belarusians. “They were not part of it,” he said.

Mr. Ahmed, fearing a ruse aimed at gathering people together for deportation to Iraq, has refused to leave the encampment next to the border fence and move to the brick warehouse a few hundreds yards away. “It is a trap,” he said. “If I get deported I might as well be dead.”