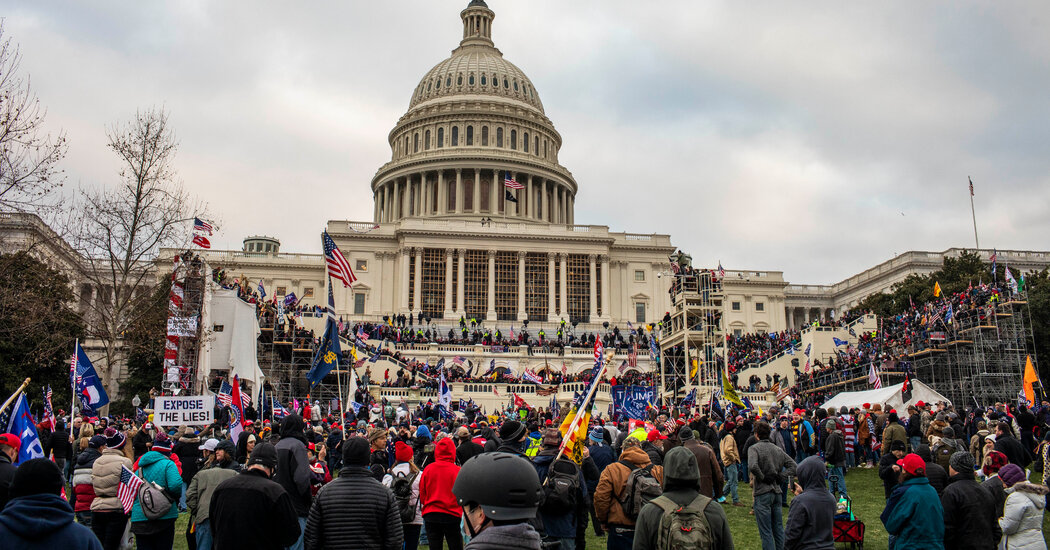 A California man who pleaded guilty to threatening dozens of people, including members of Congress and journalists, for saying that former President Donald J. Trump had lost the 2020 election was sentenced on Monday to three years in prison.

The man, Robert Lemke, 36, sent texts and voice messages to about 50 people between November 2020 and early January. Several of the messages warned elected officials and reporters to stop telling the public that Joseph R. Biden Jr. had won the election, and said that Mr. Lemke and others were “armed,” federal prosecutors said.

Damian Williams, the U.S. attorney for the Southern District of New York, said on Monday that Mr. Lemke had targeted his victims “for the perceived offense of stating the facts.”

“Rather than attempting to effect change through the lawful forms of expression that all of us Americans still enjoy, Lemke sought to quell freedom of expression, to intimidate and instill fear in others by threats of violence,” Mr. Williams said in a statement.

Julia L. Gatto, a lawyer for Mr. Lemke, did not respond to requests for comment on Tuesday.

On Jan. 6, the same day that Trump supporters stormed the U.S. Capitol, Mr. Lemke sent messages to the brother of Representative Hakeem Jeffries of New York, a Democrat.

“Your brother is putting your entire family at risk with his lies and other words,” one of the messages read, according to federal court documents. “We are armed and nearby your house. You had better have a word with him. We are not far from his either.”

Senator Tammy Duckworth, Democrat of Illinois, was also threatened, according to a letter she wrote to Judge Alvin Hellerstein. She said that after she spoke on the Senate floor on Jan. 6 about the importance of certifying the results of the election, she received a text from Mr. Lemke.

The letter said Mr. Lemke texted her that the insurrection that day was the “tip of the iceberg” and described himself as part of “underground communication networks” of retired military and law enforcement personnel.

“We are watching,” he said, according to the letter. Ms. Duckworth told the judge that “In that moment — and for weeks afterwards — I was terrified for my family.” She added, “We’ve been forced to turn our home into a bunker.”

Mr. Lemke was arrested by federal authorities in California that month. He pleaded guilty in October to making threatening interstate communications.

Prosecutors said on Monday that he used “various electronic accounts” and at least three phone numbers to mask his identity when he sent threats. They also said that, despite his claims, he was not affiliated with law enforcement or the military.

Mr. Lemke’s lawyer, Ms. Gatto, described him in court documents as a troubled man with a history of mental illness and alcoholism but no history of physical violence. She said he was “egged on by the incendiary rhetoric” on social media, from politicians and in news stories.

“Mr. Lemke was consumed with the narrative that the election had been stolen from Donald Trump,” Ms. Gatto wrote in a sentencing memorandum, which asked that Mr. Lemke be sentenced to the 11 months he had already served in federal prison.

Mr. Lemke’s case is one of several in which Mr. Trump’s supporters have been charged with threatening public figures for rejecting the false narrative that Mr. Trump won the election.

Federal prosecutors have not publicly identified most of the people who were threatened in Mr. Lemke’s case.

But the office of Representative Jeffries confirmed in January that the congressman and his brother, Hasan Jeffries, a history professor at the Ohio State University, were targets. A person briefed on the investigation also confirmed to The New York Times that the person referred to in the complaint as “Journalist-1” was George Stephanopoulos, an ABC News anchor.

Mr. Lemke, of Bay Point, Calif., told Professor Jeffries that he was part of a group of “active/retired law enforcement or military” that had “armed members near your home,” according to court documents.

Scott Perry. The panel is requesting testimony and documents from the Republican representative, the first public step the committee has taken to try to get information from a group of G.O.P. congressmen, which includes Jim Jordan, Andy Biggs, Paul Gosar, Louie Gohmert and Mo Brooks, who were deeply involved in efforts to overturn the election.

Professor Jeffries said in an email that he was satisfied with the sentence and declined to comment beyond a letter he sent to Judge Hellerstein.

The letter said that the texts had created “a palpable sense of fear” in his home.

“I could see it in my 11-year-old daughter’s eyes when she wondered whether the odd creak in the house was actually someone trying to break in and harm us,” Professor Jeffries wrote.

He said that Mr. Lemke turned “a family’s world upside down” and “shook us to the core.”

Mr. Lemke sent a similar text to a relative of Mr. Stephanopoulos, saying that the journalist’s words were “putting you and your family at risk.”

“We are nearby, armed and ready,” Mr. Lemke wrote, according to prosecutors. “Thousands of us are active/retired law enforcement, military, etc. That’s how we do it.”

Brian Stelter, CNN’s chief media correspondent, said in an article published Monday that he and a colleague, the anchor Don Lemon, had been among the journalists that Mr. Lemke had threatened. Mr. Stelter described one message he received from Mr. Lemke that included a photo of his father’s grave.

He said that Mr. Lemon began “choking up” while telling Judge Hellerstein that Mr. Lemke had called him “horrendous names,” including homophobic and racist slurs.

“I am tired of looking over my shoulder,” Mr. Lemon said, according to Mr. Stelter’s account. “I am tired of being suspicious of even friendly faces in public.”

Mr. Stelter also discussed the threats on Monday on his show “Reliable Sources,” where he thanked prosecutors and the F.B.I. and expressed hope that the case “really is a statement” that trying to scare journalists into silence would not be tolerated.

“Threats and harassment hinder a free press,” Mr. Stelter said. “This is the type of harassment that journalists feel every day. It is pervasive.”