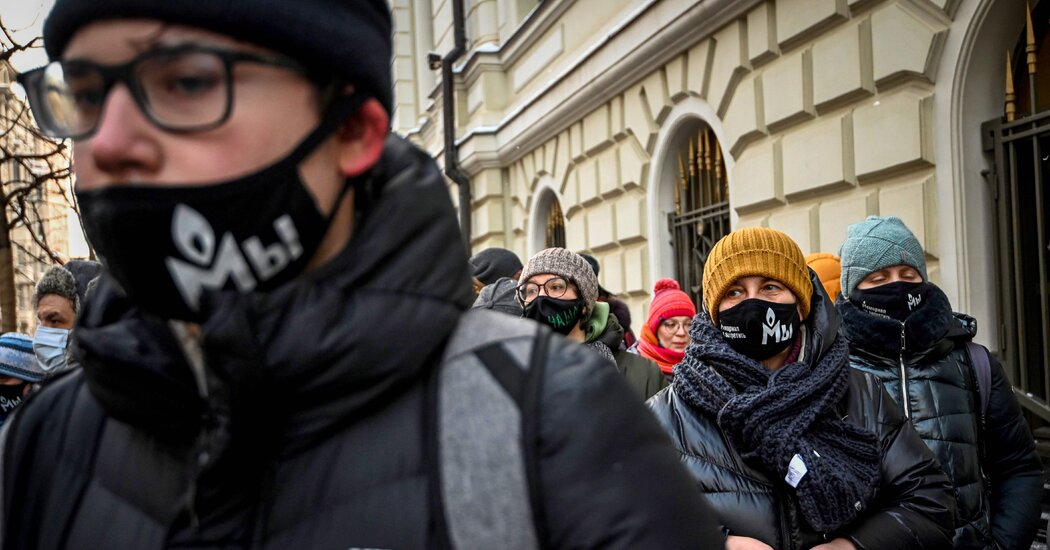 MOSCOW — Russia’s Supreme Court ruled on Tuesday that the nation’s most prominent human rights organization must close, signaling President Vladimir V. Putin’s longstanding determination to control the narrative of some of the most painful and repressive chapters of Russian history.

The court ordered the liquidation of Memorial International, which chronicled the harrowing persecutions in the infamous Stalin-era labor camps in an effort to preserve the memory of its victims. The group, founded by the Nobel Peace Prize laureate Andrei Sakharov and other dissidents more than three decades ago, became a symbol of the country’s emerging democracy after the collapse of the Soviet Union.

The decision comes after a year of broad crackdown on opposition in Russia as the Kremlin moved aggressively to stifle dissent — in the news media, in religious groups, on social networks and especially among activists and political opponents, hundreds of whom have been harassed, jailed or forced into exile.

Shutting down Memorial is also another step in Mr. Putin’s effort to recast Russia’s legacy as a series of glorious accomplishments and soften the image of the often-brutal Soviet regime. While the state opened a comprehensive Gulag history museum in Moscow and Mr. Putin laid flowers at a new monument to the victims of Soviet repression, the increasingly emboldened Kremlin has moved aggressively to remove alternative interpretations of Russian history by organizations it does not control.

In particular Mr. Putin is eager to convince Russians that their country is surrounded by enemies who wish to oversee its demise, a tack he has taken recently in demanding that NATO guarantee it will not expand farther eastward toward Russia. As such, the Kremlin wants the Russian public to focus on foreign foes instead of crimes committed by homegrown dictators.

In recent years, Mr. Putin has shown a keen interest in shaping interpretation of Russia’s history, publishing his views in lengthy articles about the Soviet Union’s key contribution to the victory over Nazism and “the historical unity of Russians and Ukrainians.” His viewpoint includes a renunciation of the democratic steps taken in the 1990s, which included reforms, self-criticism and social and economic upheaval.

The hearing drew dozens of protesters outside the courthouse, and afterward families of those affected by Stalins’ repressions and opposition figures expressed outrage, pointing to the deepening level of repression under Mr. Putin.

Ilya Miklashevsky, 65, whose father and grandfather were both imprisoned in the gulag, said Memorial’s closure represents “a new step downward,” adding, “the country is sleepily moving downhill.”

Sergei Mitrokhin, a Russian opposition politician, said that Memorial was “the last barrier on the way to complete Stalinization of the society and state.”

“What we have now is still lite Stalinism,” he said, speaking on Ekho Moskvy, a radio station. “I am afraid it can turn way worse. It is a tragedy for our country.”

Memorial International oversees an archive of victims of Soviet persecution, mostly in the era of the gulags, the forced labor camps where Russians were imprisoned in harsh, debilitating conditions. Its database contains more than three million names — no more than a quarter of all victims, according to the organization’s estimates.

Memorial’s lawyers have dismissed all of the accusations against the group as unfounded and called its persecution “politically motivated.” In a statement, Memorial said that its members were intent on “finding legal ways” to continue their work.

Jan Z. Raczynski, chairman of the board of Memorial International, said the group intended to appeal the ruling and that it would be allowed to operate for at least a month while the appeal was pending. It is unclear what will happen to Memorial’s archive and other physical items, including the ones it displays in a subterranean Moscow museum.

In a separate hearing on Wednesday, the Moscow City Court will rule on whether to shut down Memorial’s Human Rights Center, which compiles a list of current political prisoners in Russia. The center is accused of “justifying terrorist activities” by including members of banned religious organizations on the list.

The list includes Aleksei A. Navalny, the imprisoned Russian opposition leader, who was poisoned in a clandestine operation widely believed to have been organized by the Russian special services. In Siberia on Tuesday, the authorities raided the homes of two regional heads of Mr. Navalny’s political movement, branded as “extremist” by a Russian court in June.

Mr. Raczynski said the Russian authorities were seeking to whitewash Soviet history and that the prosecutor had directly addressed historical issues in arguments before the Supreme Court, though the case was ostensibly about violation of the foreign agent law.

The legal pressure, he said, was intended to shut both Memorial’s historical research into Soviet repressions and current human rights advocacy. The two branches of the group’s work are related, he said, and both are now “seen as undermining the authority of the government.”

Criticism of Soviet policies, he said, runs counter to the “current government’s propagandistic concept that, ‘our government was always good.’”

“There’s an old, banal formula that whoever doesn’t know the past is doomed to repeat it,” Mr. Raczynski said. “The situation of the past decade shows we are moving in that direction.”

In another signal of the state’s efforts to block Memorial, a Russian court on Monday extended the term of Yuri Dmitriev, a historian who chaired the group’s regional office in Karelia, to 15 years from 13. Mr. Dmitriev, who discovered mass graves resulting from Stalin’s brutalities, was convicted of sexually abusing his adopted daughter, a charge he denied.

The judge’s ruling on Tuesday cited what it said were repeated violations of the foreign agents law. Passed in 2012, the measure has been criticized by the country’s opposition as a vehicle intended by the Russian state to stifle all dissent. It orders all organizations that receive foreign funding and engage in loosely defined political activity to label themselves as “foreign agents,” a designation that carries the stigma of being on the payroll of foreign governments.

The law imposes onerous requirements on those designated, including extensive financial disclosures. Memorial’s leaders say they have made every effort to comply with the requirements even though they regard the law as unconstitutional.

Yelena Zhemkova, Memorial’s executive director, said that mistakes are possible in its gargantuan task of keeping a registry of victims, but that they are “always corrected.”

“What Memorial does represents 33 years of hard work of very many people,” Ms. Zhemkova told the court. “We work for the benefit of our people and our country.”

During Tuesday’s hearing, Aleksei Zhafyarov, the prosecutor, said Memorial only “speculated on the topic of political repressions” but that in reality it tried to portray the Soviet Union as “a terrorist state” and aimed to “rehabilitate Nazi criminals.”

Mr. Zhafyarov’s statements echoed earlier comments by Mr. Putin, who called Memorial “one of the most reputable organizations” during a meeting with his human rights council this month, but also accused it of glorifying Holocaust perpetrators.

Mr. Raczynski, the chairman of Memorial’s board, said the state’s arguments were specious.