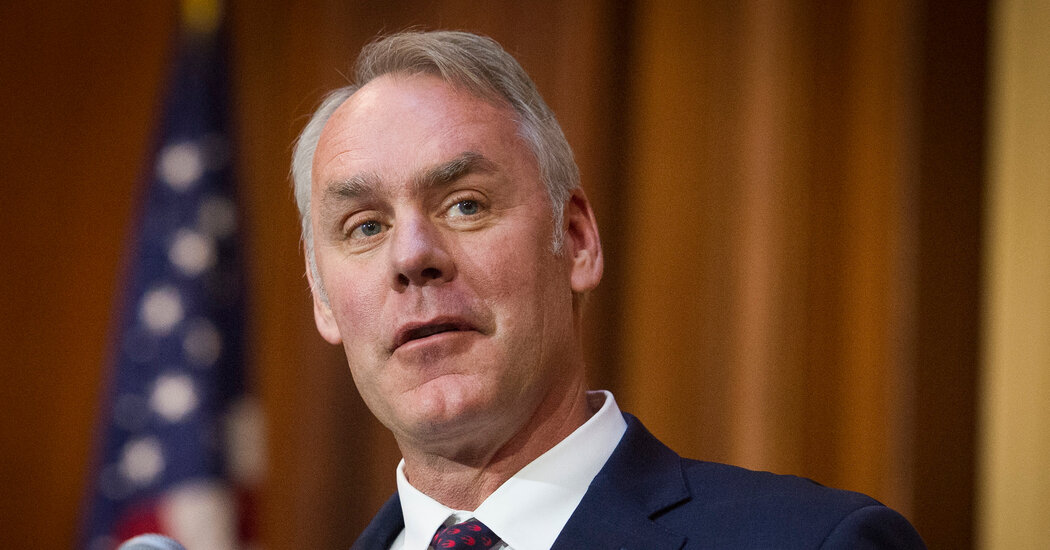 WASHINGTON — Ryan Zinke, the former interior secretary, misused his position and lied to investigators about his involvement in a Montana land deal, repeatedly breaking federal ethics rules, a government watchdog said on Wednesday.

The Interior Department’s inspector general found that while in office, Mr. Zinke continued to negotiate with developers about a real estate project in his hometown, Whitefish, Mont. His involvement violated an ethics agreement he had signed upon taking office to not participate in such matters.

Mr. Zinke, who is running for Congress in Montana, was the subject of several ethics inquiries while he served under President Donald J. Trump. His campaign did not respond to repeated requests for comment but called the report a “political hit job” in a statement to The Associated Press.

In 2007, Mr. Zinke helped establish a charitable foundation, the Great Northern Veterans Peace Park Foundation, and in March 2017, he resigned as its president as part of the ethics agreement. But from August 2017 to July 2018, Mr. Zinke and project developers exchanged emails and text messages about plans to use foundation land for a parking lot and a proposed microbrewery, investigators said. Mr. Zinke, the report said, “played an extensive, direct and substantial role” in representing the foundation during negotiations.

Questioned about his role in the negotiations, Mr. Zinke knowingly misled an investigator, the report added. Despite his extensive involvement with the project, Mr. Zinke told the investigator that he had merely helped his wife file taxes for the foundation and that he did not represent the foundation in any capacity.

Additionally, the inspector general found that Mr. Zinke misused his office for private gain when he directed his staff to arrange a meeting with the developers in his office at the Interior Department and print documents related to the real estate project.

But the report said that Mr. Zinke did not violate federal criminal conflict of interest laws because the deal did not involve official department matters. And although one of the developers was an executive of the energy giant Halliburton, Mr. Zinke had not done anything in his official capacity to benefit the company or the executive, the inspector general found.

Scrutiny into the deal began in June 2018, when Politico reported on the involvement of Mr. Zinke and the Halliburton executive. (Halliburton’s link raised concerns of a conflict of interest given that the company could be affected by the Interior Department’s policies on oil and gas drilling on public lands.) The Interior Department’s inspector general opened its inquiry that summer and referred its findings to the Justice Department, which declined to press charges.

As interior secretary, Mr. Zinke, a former Navy SEAL and Montana’s lone House member from 2015 to 2017, promoted Mr. Trump’s energy-first policies. He opened millions of acres of public lands to drilling and made headlines when he rode a horse to his first day on the job. He resigned in January 2019 as he faced numerous investigations into his ethical conduct, including his policies and business dealings. Mr. Zinke repeatedly denied wrongdoing. In a statement announcing his intent to step down, Mr. Zinke said he could not “justify spending thousands of dollars defending myself and my family against false allegations.”

Other investigations into Mr. Zinke include his decision to block a proposal from two Native American tribes to expand a casino operation in Connecticut. And in 2018, a government watchdog concluded that he violated department policy by having his wife accompany him in government vehicles.