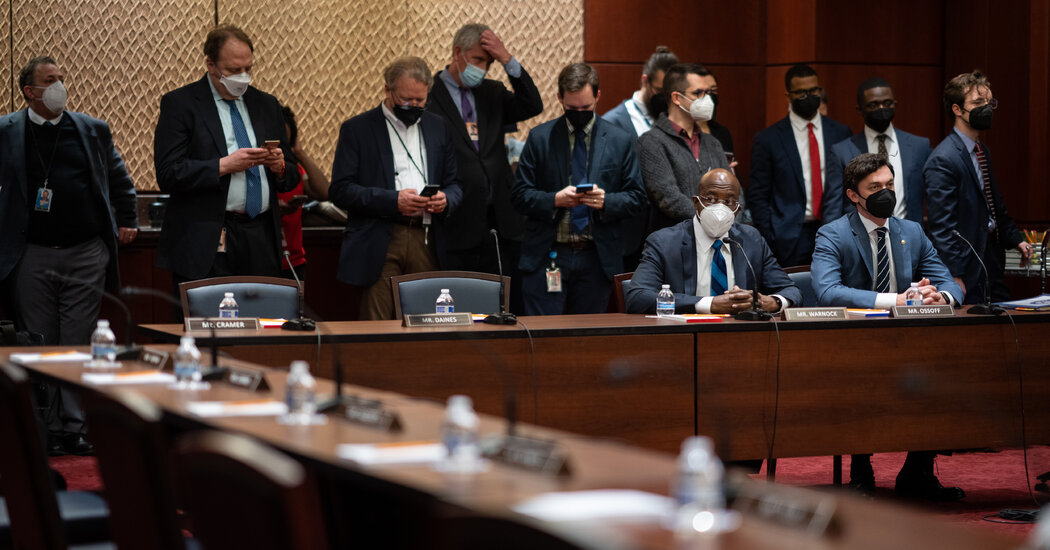 President Biden’s plans to reshape the Federal Reserve suffered a setback on Tuesday as Republicans delayed a key vote on his five nominees for its Board of Governors.

Republicans did not show up for a committee decision that would have advanced the nominees to the full Senate for a confirmation vote. Because a majority of the Senate Banking Committee’s members need to be physically present for such votes to count, their blockade effectively halted the process.

The president has renominated Jerome H. Powell as Fed chair and has tapped Lael Brainard, a current Fed governor, as vice chair. He has also nominated the economists Lisa D. Cook and Philip N. Jefferson as Fed governors. But Ms. Raskin — a longtime Washington policymaker and lawyer whom Mr. Biden has picked as vice chair for bank supervision — has garnered the most pushback.

To prevent her nomination from advancing to the full Senate, Republicans held up the vote on all five nominees.

Democrats and the White House criticized Republicans for engineering a boycott and scrambled for a solution that could get the nominees to a confirmation vote. Senator Sherrod Brown, Democrat of Ohio and chair of the Banking Committee, on Tuesday shot down the idea that he would separate Ms. Raskin from the other nominees to allow the rest to advance. Ms. Raskin could face tough odds of passing, especially on her own.

By nominating five of the Fed’s seven governors and all of its highest-ranking leaders, Mr. Biden had a chance to shake up the institution. While some of his picks — like Mr. Powell — represented continuity, together they would have made up the most racially and gender-diverse Fed leadership team ever.

Sarah Binder, a professor of political science at George Washington University who co-wrote a book on the politics of the Fed, said Democrats would need to come up with a strategy to overcome the Republican block or the nominees could get stuck in limbo.

“It is really a delay — it might yet scupper Raskin,” she said. She noted that Democrats could break the nominations up or try to garner enough support among the full Senate to override the rules and get the nominees past the committee, though that might be a challenge.

“It’s pretty uncharted, and they’re going to have to find a way,” Dr. Binder said.

Molly Reynolds, a senior fellow in governance studies at the Brookings Institution, said that outside of trying to change Senate rules — which she called the “nuclear option” — Democrats’ clearest avenue was probably to negotiate with Republicans.

“They just need a Republican to show up,” she noted, explaining that the senator would not even need to vote yes for the committee to secure a majority and move the candidates along.

Tuesday’s maneuver was the latest step in Mr. Toomey’s opposition campaign against Ms. Raskin, who would serve as arguably the nation’s most important bank regulator if confirmed.

Mr. Toomey has criticized Ms. Raskin for past comments on climate-related regulation, worrying that she would be too activist in bank oversight. More recently, he has pressed for more information about her interactions with the Fed while she was on the board of a financial technology company that was pushing for a potentially lucrative central bank account.

“Until basic questions have been adequately addressed, I do not think the committee should proceed with a vote on Ms. Raskin,” Mr. Toomey said in the statement.

White House officials criticized his move as inappropriate when the Fed is wrestling with rapidly rising prices and preparing to raise interest rates next month.

“It’s totally irresponsible, in our view — it’s never been more important to have confirmed leadership at the Fed,” said Jen Psaki, the White House press secretary. She added that the administration’s focus now was moving the nominees through the committee and called Mr. Toomey’s probing of Ms. Raskin’s background “false allegations.”

The dispute centers on the revolving door between government regulators and the arcane world of financial technology.

Mr. Toomey and his colleagues have said Ms. Raskin, a former Fed and Treasury official, had contacted the Federal Reserve Bank of Kansas City on behalf of Reserve Trust, a financial technology company. Reserve Trust secured a strategically important account at the Fed while she was on its board: To this day, it advertises that it is the only company of its kind with what’s known as a “master” account.

Master accounts give companies access to the U.S. payment system infrastructure, allowing firms to move money without working with a bank, among other advantages.

Ms. Raskin said in written responses to Mr. Toomey’s questions early this month that she did “not recall any communications I made to help Reserve Trust obtain a master account.” But Mr. Toomey said in a subsequent letter that the president of the Kansas City Fed, Esther George, had told his staff that Ms. Raskin called her about the account in 2017.

The Kansas City Fed has insisted that it followed its normal protocol in granting Reserve Trust’s master account and noted that talking with a firm’s board members was “routine.” But Mr. Toomey has continued to push for more information.

“Important questions about Ms. Raskin’s use of the ‘revolving door’ remain unanswered largely because of her repeated disingenuousness with the committee,” Mr. Toomey said in his statement Tuesday.

Democrats have emphasized that Ms. Raskin recently committed to a new set of ethics standards, agreeing not to work for financial services companies for four years after she leaves government — a pledge Ms. Cook and Mr. Jefferson also made, at the urging of Senator Elizabeth Warren, Democrat of Massachusetts.

Ms. Brainard agreed to a weaker version of that commitment that would bar her from working at bank holding companies and depository institutions outside of mission-driven exceptions like banks that target underserved communities, a spokesperson for Ms. Warren’s office said Tuesday.

Mr. Powell declined to make a similar commitment, the spokesperson said. The Fed chair did signal that he would adhere to the administration’s ethics rules, which ban paid work related to government service for two years upon leaving office.

On Tuesday, a dozen Republican chairs in the room where the committee met remained empty while Democrats occupied their seats across the room. Democrats took a vote to show support, though it was not binding, and Mr. Brown pledged to reschedule.

“Few things we do as senators will do more to help address our country’s economic concerns more than to confirm this slate of nominees, the most diverse and most qualified slate of Fed nominees ever put forward,” Mr. Brown said, chiding Republicans for skipping the session.

“They’re taking away probably the most important tool we have — and that’s the Federal Reserve — to combat inflation,” he later added.

The Fed has four current governors, in addition to its 12 regional presidents, five of whom vote on monetary policy at any given time. Mr. Powell has already been serving as chair on an interim basis, since his leadership term officially expired this month.

Even if the nominees advance, Ms. Raskin may struggle to pass the full Senate. Winning confirmation would require her to maintain full support from all 50 lawmakers who caucus with Democrats and for all those lawmakers to be present unless she can win Republican votes. Senator Ben Ray Luján, Democrat of New Mexico, has been absent as he recovers from a stroke.

“The Republicans are playing hardball because they can,” said Ian Katz, the managing director at Capital Alpha Partners. “At the least, it delays her confirmation. It could have the ultimate effect of killing it.”