Taylor Swift’s ‘All Too Well’ and the Weaponization of Memory 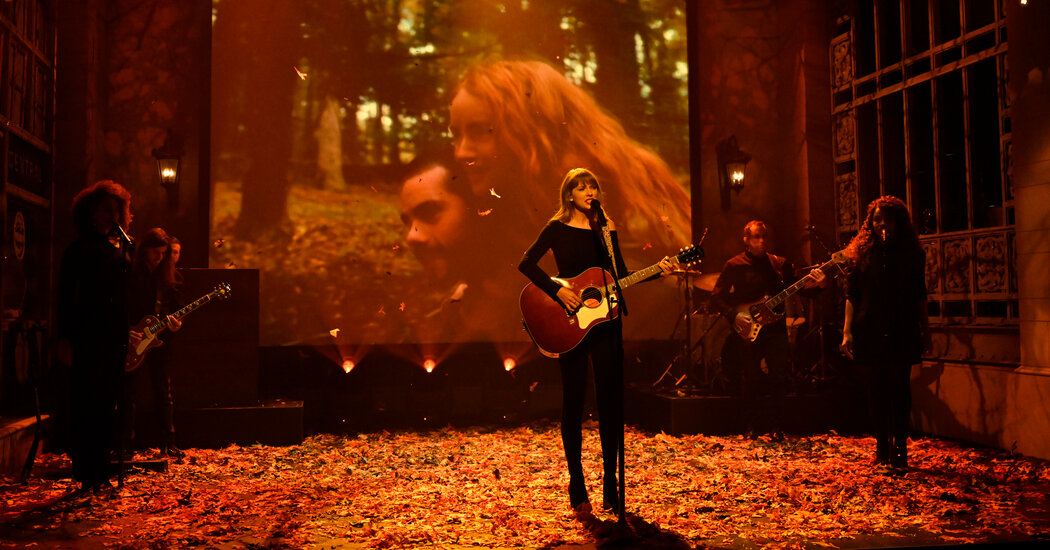 “A record label didn’t pick this song as a single,” Taylor Swift told an enraptured audience Friday afternoon in Manhattan, where a few hundred fans assembled for the debut of her latest self-directed music video: an elaborate clip for the new 10-minute version of “All Too Well,” a bitter remembrance of a past relationship that originally appeared on her 2012 album, “Red.”

“It was my favorite,” Swift continued. “It was about something very personal to me. It was very hard to perform it live. Now for me, honestly, this song is 100 percent about us and for you.”

Several people were already in tears — having burst into heaving, Beatlemania-style sobs as soon as Swift appeared in a regal purple pantsuit — but at this admission they cried audibly harder. “My actual mother!” one young woman gasped. Another, seated directly and perhaps precariously behind me, muttered repeatedly, “I’m going to throw up.”

Few A-list musicians of this millennium have sustained a bond with their fans as intensely as Swift with her “Swifties.” To her credit, she feeds them well. She drops Easter eggs like a benevolent mother hen, arranges elaborate meet-and-greets, and once invited some fans over to her house to listen to her new album while munching on cookies she’d baked for them.

At the Friday event (for a video starring the actors Dylan O’Brien and Sadie Sink), each audience member received an autographed movie poster and — the song is a famous weepie — a custom packet of “All Too Well” tissues.

But with all the fanfare around the release of the extended track, a certain shared intimacy was about to be lost, too. “All Too Well” has been more of a communal secret than a hit, the favorite track of true Swift connoisseurs and, often, music critics (this one included). Now the song — which appears on “Red (Taylor’s Version),” the latest album she rerecorded so she can control its masters — was accompanied by a music video so lengthy and elaborate that Swift was staging a premiere for it and calling it a “short film.”

Part of what fans feel for “All Too Well” is nostalgia for an earlier part of Swift’s career and, by extension, their own lives. “Red” is perhaps the most transitional of her nine albums, a bridge that marked the beginning of Swift’s pop crossover but also the moment before her songwriting became as sleek and streamlined as it would on her next album, the blockbuster 2014 release “1989.”

And so the eclectic “Red” juxtaposes the Max Martin-assisted pop of “I Knew You Were Trouble” and “We Are Never Ever Getting Back Together” with the coffee shop folksiness of “Treacherous,” “I Almost Do” and “Begin Again.” An achingly rendered portrait of a breakup, “All Too Well” represents the artistic peak of the more singer-songwriter-oriented sound, and the closing of a chapter in Swift’s evolution: It is, at least to date, the last song she wrote with one of her most trusted early collaborators, the country songwriter Liz Rose.

“All Too Well” got its start during a rehearsal soundcheck, when Swift began playing the same four chords and ad-libbing lines about a relationship that had recently ended. “The song kept building in intensity,” she later recalled. Wisely, her sound engineer captured the impromptu jam session, and Swift later brought this recording to Rose.

Part of the reason Swift wrote her 2010 album, “Speak Now,” entirely on her own was to silence the skeptics who believed that Rose had a heavier hand in her music than Swift had admitted. But in a 2014 interview, Rose said that she acted “more like an editor.” “Taylor is good because she has lyrics that work for her age,” Rose said. “I just help her grab the ones that are great.”

The 10-minute “All Too Well” illuminates this process: It is angrier, far less filtered and more explicit in every sense of the word. The five-and-a-half-minute cut of “All Too Well” that appeared on “Red” was an achievement of taut, streamlined storytelling and vividly spot-lit details. The new version knows no such restraint. It is gloriously unruly and viciously seething. With its release, the millennial “You’re So Vain” has suddenly become the millennial “Idiot Wind.”

In both its incarnations, “All Too Well” is a song about the weaponization of memory. The devil is in the details, the more specific, the more they seem to assert, in the face of an unfeeling and perhaps manipulatively disbelieving ex, that this experience really happened: a lost scarf, the way an open refrigerator illuminated a dark kitchen.

But for all its hyper-personalization — and for the public’s somewhat excessive fixation on the famous actor who is rumored to have inspired it — “All Too Well” is also, quite poignantly, about a young woman’s attempt to find retroactive equilibrium in a relationship that was based on a power imbalance that she was not at first able to perceive.

The most striking lyric in the new version references the age gap between an older man and a younger woman: “You said if we had been closer in age maybe it would have been fine/And that made me want to die.” While the song’s subject is never accused of doing anything much worse than some mild gaslighting and hypocritical key chain-owning, “All Too Well” parallels the emotional work that many women have been privately undertaking in the wake of the #MeToo movement: Looking back on past encounters or relationships that left them with a seemingly outsize feeling of unease; wondering what exactly constitutes exploitation or emotional abuse; wishing they could go back and extend some compassion or wisdom to their vulnerable younger selves.

For the elegant simplicity of its structure, the shorter version of “All Too Well” is by far the better song. But the power of the new version comes from its unapologetic messiness, the way it allows a woman’s subjective emotional experience to take up a defiantly excessive amount of time and space. That was most apparent when Swift played the entire song this weekend on “Saturday Night Live.” During a transfixing performance, she moved through a cycle of feelings as elemental as the seasons: the springlike flutter of new romance, the summery heat of passion, the autumnal operatics of grief, and finally — as snow fell around her in the song’s last moments — the cooling relief of long-delayed acceptance.

Swift hasn’t written a breakup song nearly as scorching in the decade since “All Too Well,” and for the past several years she’s kept her seemingly less melodramatic relationship with her boyfriend Joe Alwyn as far from the public eye as she can. On her more recent albums, “Folklore” and “Evermore,” she’s revisited the acoustic sound that characterized the quieter side of “Red” while writing more character-driven songs than the candidly autobiographical work for which she was once known and unfairly criticized. But in revisiting the old hurts of “All Too Well” on such a public stage, she seems once again to be bridging two phases of her career, reinhabiting her 21-year-old self as though she were a complex, intuitively understood fictional character.

Occasionally, during her “S.N.L.” performance, Swift looked directly into the camera and delivered a few glances that could have sliced through diamond. Some might have believed she was eying her ex, who may or may not still be in possession of that fabled scarf. But the truth was that the song isn’t just about him anymore. It’s also about the fans, the depths they’d heard in it before anyone else, and whatever and whoever they still wished they could forget.