The Role of Art in a Time of War 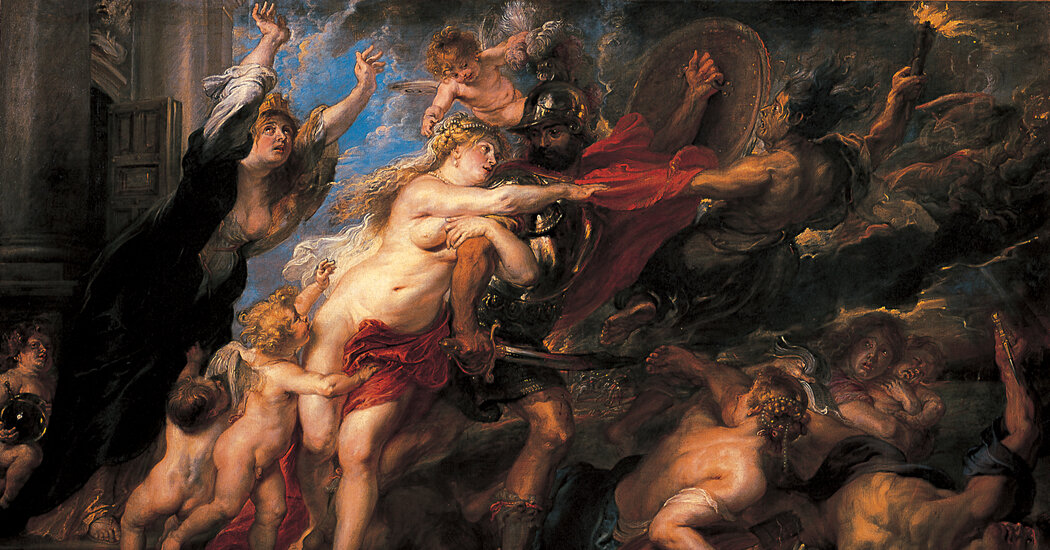 KYIV, Ukraine — You do not have to go far outside of Kyiv to see how the massacre of civilians and the trampling of culture still come one after the other. In Borodianka, a nucleus of Russian atrocities about 45 minutes north of here — the drive is slower now that the bridges have been demolished — the Palace of Culture has had its windows blown out; its concert hall is dust-caked, and the ticket booths have been ripped asunder. Halfway between the capital and the Belarusian border, I had to contort my body through twisted studs to enter the leveled Ivankiv Historical and Local History Museum, its statuary now pitted, its embroideries scorched. It is far worse further east.

Here in Kyiv the masterpieces have, like many of its citizens earlier, gone underground. The Khanenko National Museum of Arts, in an old mansion on Tereshchenkivska Street, owns a smaller Rubens: a little oil sketch of a river god, normally on a blue wall beneath a Beaux-Arts skylight. I couldn’t see it when I walked over there; the whole collection is in hiding.

In the first days of the war, when Kyiv was besieged from all sides and half this city’s population fled, many Americans in the arts wanted to know what they could do, beyond the things everyone ought to do: support charities, support refugees. Museums and orchestras made their requisite statements of revulsion and allegiance. The Ukrainian national anthem was sung at the Metropolitan Opera; a Ukrainian folk song cold-opened “Saturday Night Live.” We have now all internalized the participatory prerogatives of social media: you must react, you must engage. The algorithms do not favor Rubensian allegory.

The authorities in Ukraine, up to the actor-turned-commander in chief, have not been shy in encouraging the domain of international culture to support the war effort. President Volodymyr Zelensky has addressed the gussied-up crowds at the Venice Biennale and the Cannes Film Festival; the Grammys, too. “On our land, we are fighting Russia, which brings horrible silence with its bombs — the dead silence,” said the president, in his olive T-shirt, to Olivia Rodrigo and Jazmine Sullivan and the rest of the assembled stars. “Fill the silence with your music.” (He was followed by John Legend twinkling at the piano for soldiers to “lay down those weapons”: perhaps an awkward message for defenders against an imperial invasion.)

Those of us in the rich and safe parts of the world, rich and safe as long as the nukes stay sheathed, surely get something out of this cultural solidarity. And during a war as morally unambiguous as this one, sure, why shouldn’t your local flamenco company say “Slava Ukraini” after its land acknowledgment? But that is to reduce this epochal war to just another “current thing,” which, in the United States at least, has already been eclipsed by new domestic outrages. Crimes against Ukrainian civilians still occur daily. The death toll on the front lines remains harrowingly high. If we are going to stick up for culture in wartime, it cannot be as simply another broadcast medium, not when far louder microphones speaking more accessible languages fail to turn our heads.

WHY LISTEN TO MUSIC, why look at art, why go to the theater when war is raging? Twenty years ago, in these pages, as the pile at Ground Zero still smoldered and the long war in Afghanistan had just begun, the critic Margo Jefferson gave an answer that’s always stuck with me.

The reason you need art in wartime, wrote Jefferson, is because “history cannot exist without the discipline of imagination.” Through art we establish similarities between past and future, near and far, abstract and concrete, that cast received certainties into doubt. We look and listen in a way that lets thinking and feeling run parallel to each other. And in extreme times, this sort of cultural appreciation can rise from an analytical to a moral plane. If we pay close attention — a task made harder with every meme-burst and iPhone rollout — art and literature and music can endow us with improved faculties to see our new present as something more than a stream of words and images. They can “provide ways of seeing and ordering the world,” as Jefferson wrote then: “not just our world, but those worlds elsewhere that we know so little of.”

Those cultural figures we lionize who lived through war, from Sophocles to Woolf, from Goya to Chaplin, from Kikuji Kawada to Wole Soyinka, knew better than we do that the clarity art can provide is not what you get from a lecture or a news report. Which isn’t to say that high culture will naturally lift you out of barbarism; dictators can love the ballet as much as democrats. It isn’t to say, either, that representing war is an impossible enterprise, or that documentary or testimonial modes have more limited aims than abstraction or epic. Artists foreign and domestic have been depicting the war here head-on since the origins of the fighting actually began eight years ago — in the Ukrainian director Sergei Loznitsa’s viperous satire “Donbass,” in Serhiy Zhadan’s raw novel “The Orphanage,” or in the Polish photographer Wiktoria Wojciechowska’s profound, prize-drenched war series “Sparks.”

It is simply to say that the best art depicting war matters for its own sake, and its full value lies in a realm beyond communication or advocacy. Implicitly, we already know this: There’s a reason that Picasso’s “Guernica” of 1937, which located a universe of grief in the bombardment of one Basque village, has been invoked amid the shelling of Fallujah, of Aleppo, and now of Mariupol, while Miró’s “Aidez L’Espagne,” a more immediate cry for help made the same year, has become a mere historical artifact. There’s a reason we return to the romance of “Casablanca” when we think of refugees in wartime, and the thriller of “The Battle of Algiers” when we consider anticolonial struggle; why the hieroglyphic “Blowin’ in the Wind” has endured beyond so many more explicit songs of protest.

Somewhere in the interstices between form and meaning, between picture and plotline, between thinking and feeling, art gives us a view of human suffering and human capability that testimonials, or even our own eyes, are not always able to. These war works are not important because they are “topical” — or, to use the vacuous catchphrase of our day, “necessary.” They are important because they reaffirm the place of form and imagination in times that would deny their potentialities. They narrate history at scales and depths that push notifications simply cannot deliver, and propaganda does not bother with. They are what allow us to discern, in the daily tide of images and insanities, any meaning at all.

Let us leave the contemporary onslaught and return to Florence: a tourist mecca now, a military stronghold in Rubens’s day. The war he painted has only just begun, but Mars carries a sword that’s already tipped with blood. As he charges forward he is looking back at his lover, Venus, who’s trying desperately to restrain him.

But love is nothing now. Mars is in the grip of another woman, the fury Alecto, whose hair stands on end and whose eyes bulge with madness.

Look past the faces, look to the bodies. The big gods writhe and corkscrew as they tumble from left to right. The lesser, innocent figures skid and shatter.

Rather than depict the battles and the pestilence head-on, here it’s as if paint itself has gone to war. Rubens understood, amid unprecedented violence, that the times had turned the excesses of the Baroque into a mode of realism.

Or, put another way: he understood that the extremity of the Thirty Years’ War required an extremity in form, and that an allegory could show something other representations could not. It was a point he underscored with the last major figure in “The Consequences of War,” the one at far left. She is a young woman in a torn and ungirdled black dress. Her arms are thrust to the sky, her ruddy cheeks stained with fat tears. This wailing woman, as Rubens wrote to a fellow painter in Florence, is l’infelice Europa: “the unfortunate Europe who, for so many years now, has suffered plunder, outrage and misery, which are so harmful to all that they need no further specification.”

So harmful that they need no further specification. Even in the mid-17th century, scenes of brutality were already so potent and persistent that the whole Thirty Years’ War could be worn in Europe’s tangled gown, her unkempt hair, her hot pink face. If images of war were that ambient in the 1630s, then I don’t even know how to begin quantifying the supersaturation today. Yet our own age’s imagery of plunder and misery has less moral impact each year — as we dreadfully learned during the Syrian civil war, very probably the most documented in human history (until this one).

The omnipresent pictures and ongoing testimonies of Syrian atrocities over 10 whole years had an impact approaching zero. And I could feel it on the ground, this month, amid this appalling war’s hand-held cameras and influencer propagandists, its livestreams of Kh-22 missile strikes, its minute-by-minute Telegram updates of eastern horrors, its Instagram posts of a 4-year-old with Down syndrome struck dead by a Russian missile in a city park: These outrages in Ukraine have already become another thing to scroll past, just as we scrolled past Damascus and Aleppo.

WAR HAS BECOME THE ULTIMATE reflection of the digital addlement that the Polish novelist Olga Tokarczuk has identified as the primary challenge to artists and audiences today. On the phone screen, everywhere is just “somewhere,” Tokarczuk regretted in her 2019 Nobel lecture: “‘Somewhere’ some people are drowning as they try to cross the sea. ‘Somewhere,’ for ‘some’ time, ‘some sort of’ a war has been going on. In the deluge of information individual messages lose their contours, dissipate in our memory, become unreal and vanish.” How can any war photograph compel us, how can any work of war art preserve its importance, while swimming upstream in an undammable river of content? Soldiers, too, have phones alongside their AK-74s, and every day since Feb. 24 has brought another evanescent current thing.

Our only chance of getting from “somewhere” to somewhere, according to Tokarczuk, lies in a model of artistic creation that breaks the first-person-singular of the status update, and seeks “a story that would go beyond the uncommunicative prison of one’s own self.” American culture has grown fearful of stories like that — more universal ones, more comprehensive ones — but writing them has been the job of artists in wartime since Aeschylus staged “The Persians.” One cultural commitment we can make, as the world of yesterday passes into mist, is to rediscover the full human cost of our perpetual battles, even if their reflections in art are bound to be fragmentary. From those fragments we might yet constellate a view of the consequences of war, and of coming hazards we will not have the luxury to scroll beyond.

Peter Paul Rubens, “The Consequences of War,” via Uffizi Galleries.