The United States’ Message to Russia: Prove Us Wrong 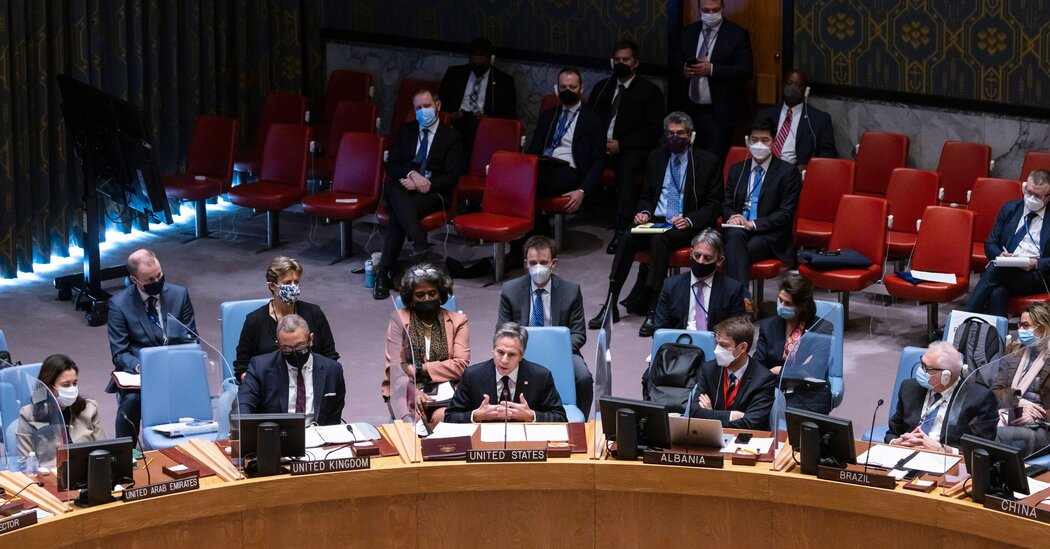 MUNICH — President Biden and his top aides acknowledge they are risking American credibility as they constantly renew the alarm that Russia is only “several days” away from triggering an unprovoked land war in Europe that could kill tens of thousands of Ukrainians in its opening hours, and plunge the world back into something resembling the Cold War.

But Mr. Biden’s aides say they are willing to take that risk.

They would rather be accused of hyperbole and fearmongering than be proven right, they say, if that’s what it takes to deter Russian President Vladimir V. Putin from pursuing an invasion that they worry will not stop at Ukraine’s borders.

“If Russia doesn’t invade Ukraine, then we will be relieved that Russia changed course and proved our predictions wrong,’’ Secretary of State Antony J. Blinken said at the United Nations Security Council on Thursday morning, in a speech that Mr. Biden had asked him to give only hours before. “That would be a far better outcome than the course we are currently on. And we will gladly accept any criticism that anyone directs at us.’’

“I am here today not to start a war, but to prevent one,’’ he declared, an oblique reference to Colin L. Powell’s famous but false case, also made to the United Nations, about why the United States and its allies had to disarm Saddam Hussein.

Mr. Biden and Mr. Blinken make no secret of their suspicion that their increasingly desperate-sounding, last-ditch efforts to deter calamity will likely fail. Their pessimism was reinforced Thursday by a series of escalations. Russian-backed forces in the Donbas region appeared responsible for shelling a school, and later claimed they had come under fire from Ukrainian forces, exactly the kind of incident Mr. Blinken warned might be used as a pretext to justify an invasion.

Mr. Biden will hold a phone call Friday afternoon with trans-Atlantic leaders about Russia’s buildup of military troops on the border of Ukraine and continued efforts to pursue deterrence and diplomacy.

Russia acknowledged on Thursday having expelled the No. 2 diplomat in the American embassy in Moscow, and sent Washington a contradictory-sounding note in which it mocked the claims that it was planning to invade. It said no such action was being planned, and then warned that it would use “measures of a “military-technical character” if the West did not meet its security demands with “legally binding guarantees.” (It is not entirely clear what “military-technical” means to Mr. Putin, but officials in Washington speculate it could encompass everything from cyberweapons to relocating nuclear weapons closer to Western Europe or the United States.)

While Mr. Biden insisted that “every indication we have is they’re prepared to go into Ukraine,’’ a growing number of diplomats and leaders pouring into Munich for an annual security conference said they thought the best they could hope for was no invasion — but a long siege of Ukraine. Under that scenario, Mr. Putin might do everything short of sending his troops over the border — cyberattacks, assassinations, coup plots, cutting off trade — in hopes of toppling the government without triggering sanctions.

“My sense is that he will avoid an overt cross of the border with Russian troops and will aim for options short of that,’’ Douglas Lute, a former deputy national security adviser and former U.S. ambassador to NATO, said Thursday.

“He enjoys this position,’’ Mr. Lute said. “Everyone’s paying attention to him, like they haven’t in years. And he feels in control.”

That is all taking place on the surface. Behind the scenes, Mr. Biden’s aides are searching Mr. Putin’s comments for evidence that he is sensing that he may have overplayed his hand — that his massing of troops has managed to unify the normally fractious 30 nations that make up the North Atlantic Treaty Organization.

Mr. Putin has reinvigorated an alliance that spent years confused about its purpose once it lost the adversary it was formed to contain, the Soviet Union. Now, containment is back. And European allies have largely, if reluctantly, lined up behind a sanctions plan that would cut off technology to Russian industry and separate its top banks from the world financial markets.

While the Russian leader has worked hard to insulate his economy from the shock of sanctions — the government has a large war chest and little debt — Mr. Putin may well be looking for fissures to exploit without risking his economy.

Mr. Biden continued on Thursday to take advantage of the fact that this is the first major geopolitical crisis to play out in a world of open-source intelligence — making it easier to call out Russian deceptions.

Americans do not need the spy-plane photographs that John F. Kennedy showed them in 1962, when he exposed the Soviet missile buildup in Cuba as a way to force Russia’s leader, Nikita S. Khrushchev, into a secret deal.

In this case, some of the best evidence is in the unclassified world. On television, news websites and Twitter, satellite photographs from private firms like Maxar help settle the debate about whether Mr. Putin is really sending some forces into retreat or whether, as the Americans claim, he is adding to the more than 150,000 troops that Mr. Biden said were massing on the border, along with tanks and a fearsome array of missiles.

So there is no real debate about what is happening on Ukraine’s borders. The firepower is there to see, and that is part of Mr. Putin’s coercion strategy. The only remaining mystery is what Mr. Putin plans to do with them. At first, U.S. officials thought he planned to use them to intimidate Ukraine’s government, force it to abandon its ambitions to join NATO at some undetermined time in the future, and stop its drift toward the West.

Then, after Mr. Putin issued a proposed “treaty’’ in December, it seemed he had a bigger plan: to evict the United States and NATO forces from former Soviet bloc nations that have joined NATO, and roll back the world order created after the Soviet collapse 31 years ago. Two weeks ago, the American assessment changed again: Mr. Putin, intelligence and military officials said, was aiming at Kyiv, the capital of Ukraine, after concluding that cyberattacks and subversion alone were unlikely to displace the government. Only a full-scale invasion would do that.

So the Biden administration is trying to test Mr. Putin’s bottom line. If the issue can be resolved by negotiating a new arms control pact that addresses Mr. Putin’s concerns about two antimissile emplacements in Poland and Romania, or rules around military exercises held by Russia and NATO, then there is room for deal making, the two men have said. And they have said there is room to renegotiate the Minsk agreement, a set of commitments made by Ukraine and Russia after the annexation of Crimea. Those have been selectively ignored, on both sides.

But it seems unlikely to longtime American officials and many of the European diplomats filtering into Munich that Mr. Putin has gone to all this expense and all this effort, and put his legacy on the line, just to paint inside the lines of the existing order. He wants to upturn it.

Since Mr. Putin came to power 20 years ago, “Russia has been challenging that system,’’ Angela Stent, a Brookings Institution scholar and the former national intelligence officer for Russia and Eurasia, wrote recently in Foreign Affairs. “The current crisis is ultimately about Russia redrawing the post-Cold War map and seeking to reassert its influence over half of Europe, based on the claim that it is guaranteeing its own security.”

That does not mean there is no way out.

In the Cuban missile crisis, the closest the world came to nuclear annihilation during the Cold War, Mr. Khrushchev ultimately took his missiles home, in return for a secret promise — which Mr. Kennedy delivered on months later — to take American Jupiter missiles out of Turkey, where their nuclear warheads were in easy range of the Soviet Union.

It is a historical example that has lingered in the background of Situation Room debates about how to negotiate with Mr. Putin, according to two participants, who described the debates on the condition of anonymity. When Mr. Blinken offered in his speech on Thursday to meet his Russian counterpart in Europe next week, and ultimately to put together “a summit of key leaders, in the context of de-escalation, to reach understandings on our mutual security concerns,’’ it was part of the search for a modern-day analogue.

Mr. Biden is no stranger to such trade-offs. He is perhaps the last politician still serving in Washington who played a key role in the debates over how to resolve disputes over long-forgotten arms control treaties with the Soviets, called SALT I and SALT II. He has already noted, at a news conference in January, that Ukraine won’t be accepted into NATO for a long while, a signal to Moscow that there was room to deal.

And there may be. But by next week, one senior administration official said late Thursday, it may be too late.