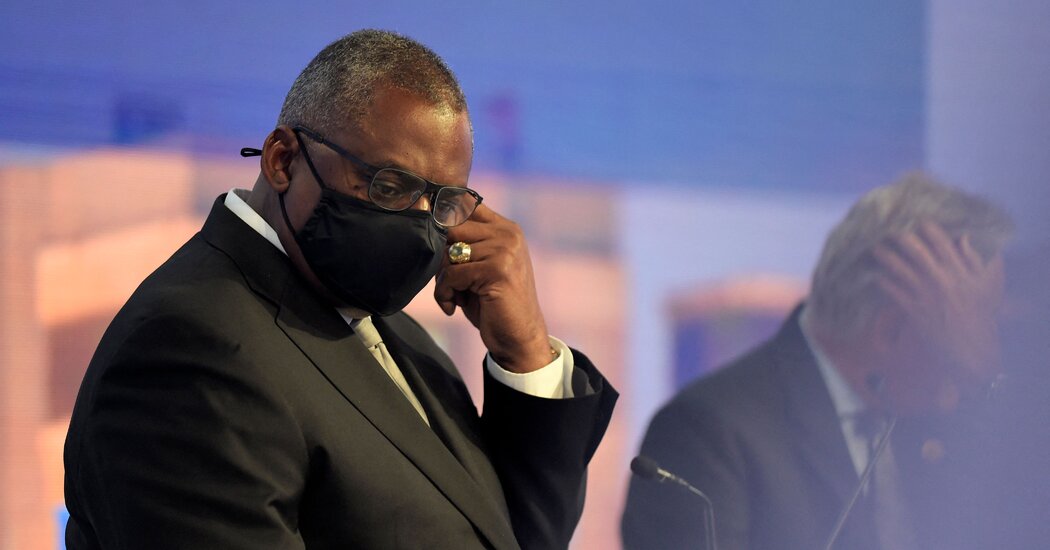 MANAMA, Bahrain — The Biden administration is trying to convince its Arab allies that the United States, despite appearances to the contrary, is not fed up with the region and headed for the doors.

It is a tough sell. At a meeting on Saturday in Bahrain that comes on the eve of global talks meant to rein in Iran’s nuclear ambitions, Defense Secretary Lloyd J. Austin III faced tough questions about how Arab allies were supposed to deal with the whiplash of an American national security policy that upends itself every four to eight years with a new president.

With President Biden now trying to undo President Donald J. Trump’s own undoing of President Barack Obama’s Iran nuclear deal, some Arab allies expressed frustration that they were caught in the middle and must go their own way. The United Arab Emirates, for instance, is taking steps to de-escalate its own tensions with Tehran, after years of striking a harsher tone.

The tumultuous American withdrawal from Afghanistan in August after 20 years, the announced withdrawal of American combat troops from Iraq by the end of this year, and the Biden administration’s recent hyping of China as its biggest and most serious national security priority have combined to leave officials in the Middle East, site of so much American national security angst over the past 20 years, feeling left out.

“Now that you’re on the clock to withdraw your combat troops from Iraq, and with the withdrawal of Afghanistan, there are a lot of worries here,” Farhad Alaaldin, the chairman of the Iraq Advisory Council, a research institute in Baghdad, told Mr. Austin during a question-and-answer session on Saturday at the International Institute for Strategic Studies conference in Manama, Bahrain’s capital. “Your partners on the scene are worried, and some of them are starting to run for cover.”

The defense secretary made efforts to reassure his counterparts in Bahrain that the United States would remain engaged in the Middle East. Referring to “a lot of angst that I hear,” Mr. Austin insisted that “we’re not going to abandon these interests going forward.”

Mr. Austin said that the Biden administration would seek to counter Iran, even as the United States tries to resuscitate the 2015 nuclear deal that Mr. Trump abandoned. The latest round of talks to revive that deal are set to begin on Nov. 29 in Vienna, and officials have been privately pessimistic that a breakthrough would come any time soon.

“We remain committed to a diplomatic outcome of the nuclear issue,” Mr. Austin said. “But if Iran isn’t willing to engage seriously, then we will look at all the options necessary to keep the United States secure.”

Those options are limited. If Mr. Trump, for all of his often-stated antipathy toward Tehran, balked at striking Iranian nuclear facilities out of fear of prompting another prolonged American engagement in the region, Mr. Biden is even less likely to take such an action, aides acknowledge, no matter how many “options” Mr. Austin mentions. In fact, concerns over ruining the looming nuclear talks is one of the reasons why the administration has so far refrained from hitting back at Iran for an armed drone attack last month on an American military base in southern Syria.

American officials say that they believe the drone attack, which caused no casualties, was Iranian retaliation for Israeli airstrikes in Syria.

Five so-called suicide drones were launched at the American base at Al Tanf on Oct. 20 in what the U.S. Central Command called a “deliberate and coordinated” attack. Only two detonated on impact, but they were loaded with ball bearings and shrapnel with a “clear intent to kill,” a senior U.S. military official said.

Most of the 200 American troops stationed at the base, whose main role is training Syrian militias to fight the Islamic State, had been evacuated hours earlier after being tipped off by Israeli intelligence, officials said.

U.S. officials said they believed that Iran directed and supplied the proxy forces that carried out the attack. Iran has not claimed responsibility for the attack, though Iranian news media applauded it.

Brian Katulis, a vice president for policy at the Middle East Institute, called the Biden administration’s policy in the region one of “treading water.” He warned that it could come with inherent problems.

“In a turbulent region,” Mr. Katulis said, “the seas can get rough and waves can swell up at a moment’s notice, making it all but impossible to keep afloat.”