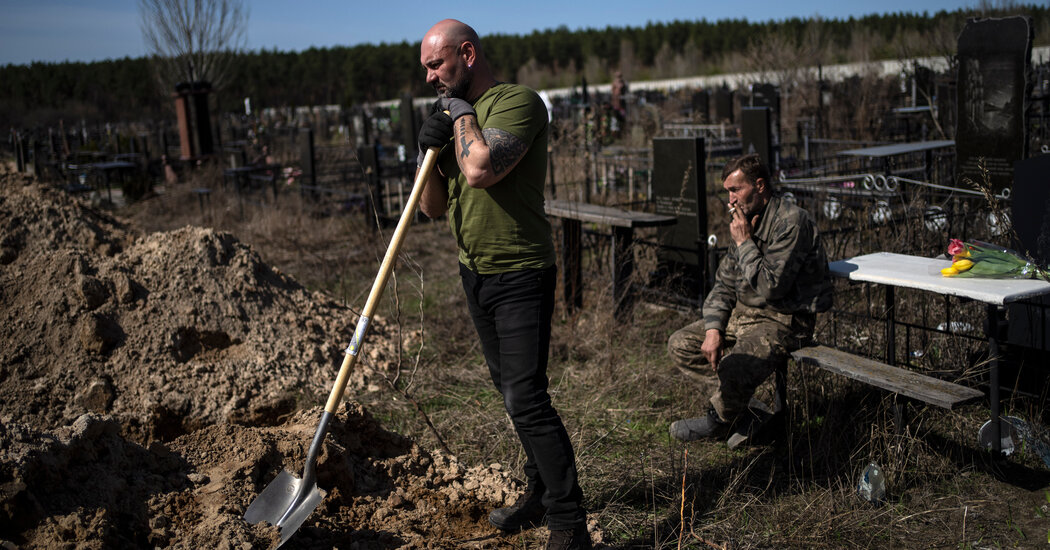 In the days after the Russian withdrawal from the outskirts of Kyiv, a driver named Oleg Naumenko opened the trunk of an abandoned car and it exploded, killing him instantly.

The car had been booby-trapped, and his family and local authorities blamed Russian soldiers. “I died with him in that moment,” Mr. Naumenko’s wife, Valeria, said between sobs.

As ordinary Ukrainians emerge from basements and bunkers into the ruins of their hometowns, many are being confronted with a new horror: thousands of mines and unexploded bombs left behind by retreating Russian troops.

Residents and authorities say that departing Russian soldiers have laced large swaths of the country with buried land mines and jury-rigged bombs — some hidden as booby traps inside homes. The explosives now must be found and neutralized before residents can resume a semblance of normal life.

Some of the explosives have been attached to washing machines, doorways, car windows, and other places where they can kill or injure civilians returning to their homes, according to residents and Ukrainian officials. Some were even hidden under hospital stretchers and corpses.

President Volodymyr Zelensky of Ukraine this week called his country “one of the most contaminated by mines in the world,” and said that authorities were working to clear thousands in the areas from which Russian armies had retreated in recent weeks. He accused Russian soldiers of leaving the explosives in their wake “to kill or maim as many of our people as possible.”

He said that the tactic was a war crime and that Russian soldiers must have been acting on instructions from top officials, adding: “Without the appropriate orders, they would not have done it.”

Human Rights Watch and The New York Times have reported that Russian forces in Ukraine appear to be using advanced land mines in the eastern city of Kharkiv. Several local officials have also said that bomb squads in their districts have found explosive devices left behind in homes.

Anti-personnel mines, which are designed to kill people, are banned by an international treaty signed by nearly every country in the world, including Ukraine; Russia and the United States have declined to join.

Ukraine’s emergency services agency has deployed a small army of about 550 mine specialists to clear the areas recently occupied by Russian forces. The teams have been working to remove about 6,000 explosives per day, and since the start of Russia’s invasion on Feb. 24, they have found more than 54,000 explosive devices, the agency reported on Tuesday.

“Wherever the occupiers stayed overnight, they would set up tripwires,” Ukraine’s interior minister, Denys Monastyrsky, said during a televised interview on Sunday. “Explosives have been found under helmets, attached to doors, in the washing machine, and in cars.”

The placement of explosives in Ukrainian homes could not be independently verified.

Mr. Naumenko, who was killed on April 4, worked as a driver in the village of Hoholiv, about 40 miles outside of Kyiv. But his talent lay in repairing cars. After Russian forces retreated from a nearby village, neighbors found an abandoned vehicle and turned it over to him.

His wife learned of his death the next day in Poland, where she had fled with their 7-year-old son and her mother at the start of the war. She returned to their village as soon as she got the news. “What was left was the car, with the door still open and a pool of blood,” Ms. Naumenko, 28, said, “and a big emptiness.”

Her account was confirmed through photos and by the Kyiv regional police, who posted a report about the incident on their Facebook page, cautioning returning residents to “not touch objects and things that are not previously tested by experts.”

Other local officials are urging residents to call emergency services before entering their homes.

Retreating armies often bury land mines in order to slow the advance of enemy armies. But experts say Russian forces have a well-earned reputation for booby-trapping areas they have vacated in order to kill and maim returning civilians.

Human Rights Watch has documented Russia’s use of antipersonnel mines in more than 30 countries where Moscow’s forces were involved, including conflicts in Syria and Libya. In Palmyra, during the Syrian war, booby traps surfaced after the Russians vacated the town.

“Leaving behind little presents for the civilians when they return — like hand grenades, trip wires, unexploded shells, pressure plates — it’s in the Russian military tradition to do that,” said Mark Hiznay, the senior arms researcher at Human Rights Watch.

“We’ve seen it before and we’ll see it again,” he said.

Mr. Hiznay said “putting a land mine in someone’s freezer” was a tactic that has no utility other than to terrorize civilians. Ukraine will be dealing with the consequences of land mines “one civilian leg at a time,” he added, explaining that it can often take years, and possibly decades, to clear all the ordnance.

“The presence of these devices denies civilians their terrain and forces them to make hard choices: take the sheep out to graze or risk stepping on a mine in the pasture,” he said.