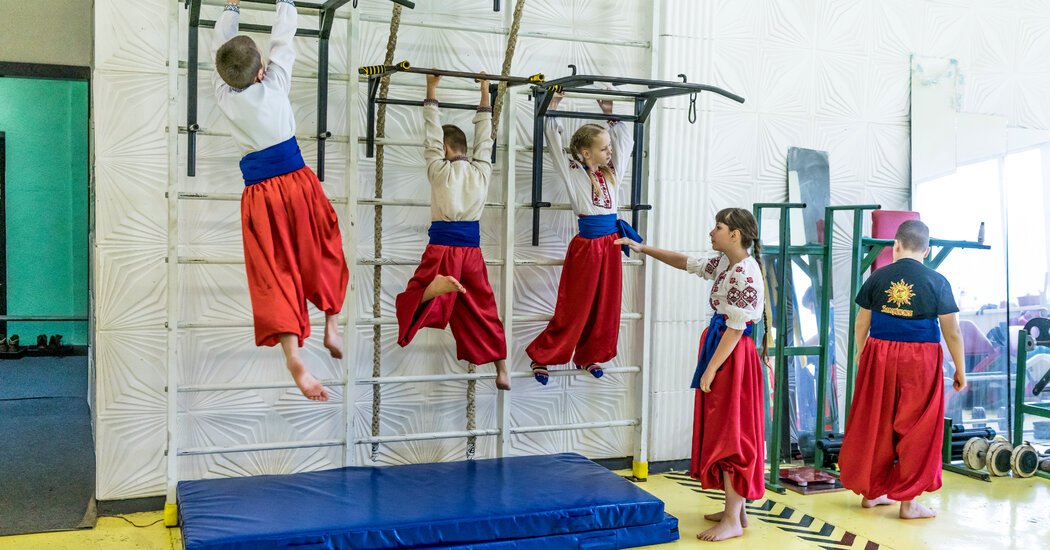 ALONG THE DNIEPER RIVER, Ukraine — Fishing on a marbled expanse of frozen river, dressed head to toe in camouflage, Viktor Berkut looked very much the Soviet-born Everyman, and has the biography to match. He joined the Red Army in 1970 and spent three decades building air defense and rocket systems directed against Moscow’s ideological enemies in the West.

But the enemy has changed, and for that Mr. Berkut blames President Vladimir V. Putin of Russia. With roughly 130,000 Russian troops now threatening his native Ukraine, the 71-year-old pensioner says any connection he once felt to Russia is gone: Ukraine should join NATO, he said, and put up bloody resistance should Mr. Putin order an attack.

“I never thought like this,” Mr. Berkut said mournfully, as he plunked a Day-Glo lure through a hole in the ice of the Dnieper River near the city of Cherkasy. “I lived all right in the Soviet Union. But now I’ve begun to understand.”

“We need to oppose Russia,” he added. “We have chosen, not a Russian path, but a European one.”

His sentiments underscore a profound shift that Ukrainians have undergone in the eight years since Russia first invaded and snatched away parts of their country. A people long divided by profound disputes over what language to speak, what church to follow and what historical heroes to revere has begun to stitch together a sense of common purpose in the face of a menacing foe.

Mr. Putin has made clear that he views Ukrainians and Russians as “one people,” divided by malign Western forces — a historical injustice he says he is determined to fix. This has driven many Ukrainians to sometimes dramatic declarations of separation. People who grew up in Russian-speaking homes now choose to speak Ukrainian exclusively, and in some cases have refused to teach the language of their parents to their children.

Across the country, Lenin statues and hammer-and-sickle emblems of the Soviet past have been toppled, replaced by monuments to Ukrainians killed in a 2014 uprising that drove a Moscow-backed government from Kyiv. After four centuries of subservience to Moscow patriarchs, Ukraine’s Orthodox Church formally split with the Russian church in 2019.

Russia remains a dominating political and cultural force in Ukraine: its rappers and Tik-Tokers are popular even among young people who increasingly take their cultural cues from the West. In the Eastern provinces of Donetsk and Luhansk, where Ukraine is fighting Russian-backed separatists, many Ukrainians still feel a strong kinship with the Russians living just over the border. And across Ukraine, a raucous public reckoning over Russia’s place in the country’s past, and its future, is unresolved.

Amid warnings from the West that Russia could attack any day, the photographer Brendan Hoffman and I set off on a journey to explore what it means to be a Ukrainian at this moment of national peril. For 560 miles, we followed the Dnieper, a sickle-shaped river that stretches the length of Ukraine, physically separating the country’s western regions from the lands to the east, long considered to be more susceptible to Moscow’s gravitational pull.

Traveling along the river today, those divisions, while not gone completely, are less visible, outshone in many ways by a sense of common struggle.

Kyiv: A changing sense of identity

We began our journey in Ukraine’s capital, Kyiv, where the Dnieper River flows past the golden domes of an 11th-century monastery and a 200-foot steel statue of a woman holding a sword and shield built to memorialize the Soviet victory in World War II.

But Kyiv’s most revered monument is of a much newer vintage. At the top of a hill, a short distance from Independence Square, or Maidan, sits a small memorial of black steel and granite plaques engraved with the spectral faces of protesters, known as the Heavenly Hundred, who were gunned down over several days in 2014 in an uprising Ukrainians call the Revolution of Dignity.

The revolt prompted Mr. Putin — concerned that Ukraine was moving irrevocably toward the West — to order the annexation of Crimea and instigate a separatist war in eastern Ukraine.

It also changed the way many Ukrainians see themselves. In a poll taken in 2001, only about half the country supported Ukraine’s declaration of independence from the Soviet Union a decade earlier. A 2021 poll found that number had risen to 80 percent, with nearly half the country in support of NATO membership.

“Ukraine as a nation was born on Maidan in 2014,” said Yevhen Hlibovytsky, a professor and public opinion pollster in Kyiv. “That’s the point when the conflict became unbearable for Putin.”

For many Ukrainians, the memorial to the Heavenly Hundred has become a site of pilgrimage. Parents of the dead visit it on their children’s birthdays and politicians come for photo ops.

Similar memorials can be found in almost every city and town. But Kyiv is where they died, many within sight of the memorial that now bears their likenesses.

Cherkasy: Debate over the primacy of language

About three hours downriver from Kyiv is the city of Cherkasy, scattered with memorials to veterans of a century of war. At the regional museum, in an exhibition on the 2014 uprising, is a photograph of a local photographer named Garry Efimov, his hair wet with blood after an encounter with riot police.

The experience was so traumatic, Mr. Efimov said, that he stopped speaking his native Russian and instead now speaks only in Ukrainian.

“It is difficult actually, when you always read Russian books and literature, Bulgakov, Tolstoy, Dostoyevsky,” he said in an interview at his art nouveau studio. “But I succeeded, and now it is harder to speak in Russian than Ukrainian.”

Though most Ukrainians speak or at least understand both Russian and Ukrainian, debates over the primacy of one language are among the most contentious within Ukraine — and also between Ukraine and Russia. Last year, a new law took effect requiring anyone working in customer service, whether waiters or bank tellers, to start any interaction with Ukrainian.

There are also strict quotas on the amount of Russian-language programming permitted on Ukrainian TV and radio.

Mr. Putin has described efforts to limit Russian in Ukraine as “genocide,” and has justified Russia’s annexation of Crimea in part by asserting the need to protect Russian speakers there.

While there are hard-liners in Ukraine on both sides of the debate, many more are like Natalia Polishchuk and Aleksandr Yaryomenko, who own a store in Cherkasy selling traditional Ukrainian embroidered shirts called vyshyvanky.

“In the store we speak Ukrainian, but between us we speak Russian,” said Ms. Polishchuk, who is 51. “We lived in the Soviet Union, we’re of an age, you understand.”

But that does not mean they are any less patriotic, said Mr. Yaryomenko, who is 60.

“If someone took over your kitchen and started frying cutlets there — they took Crimea and a piece of Donbas — what would you do, pat them on the head?” he said. “We need to support our homeland, our Ukraine.”

Even far from the front lines, it is difficult to avoid reminders of war. In Dnipro, a city of one million people five hours farther downriver, an entire square has been turned into a life-size diorama. It features armored personnel carriers, a tank turret and other artifacts from a fierce battle in the east in which a handful of Ukrainian soldiers, known as the Cyborgs, held off a siege by Russian-backed separatists that ended in early 2015 after 242 days.

Nearby, at a hospital for veterans, Aleksandr Segeda, a retired sergeant, who was born in Russia, but fought against the separatists in the east, needs no reminders of the war.

“You greet someone in the morning, and by lunch you hear that he’s no longer alive and he’s 22 years old and has pregnant wife and a small child,” Mr. Segeda said, drifting through a memory. “Forgetting that is impossible. And so is forgiving.”

Others are trying to look toward the future, even as the threat of a new war looms.

Economic ties between Ukraine and Russia were once so strong that when a state-of-the-art steel plant opened across the river in 2012, Valery Gergiev, the conductor of St. Petersburg’s Mariinsky Theater and close friend of Mr. Putin, gave a concert to mark the occasion.

In the two years before war broke out, Russia accounted for nearly half the factory’s sales of wheels for railroad cars and nearly a quarter of its sales of steel piping. Now the factory, Interpipe Steel, sells nothing to Russia.

Interpipe was forced to make huge investments to increase the quality of its products to meet the higher standards for export to Europe and North America, even while some of its employees left to join the fight in the east, said its spokeswoman, Svetlana Manko. Sales have not yet reached prewar levels, but they’re climbing steadily, she said.

“I think this trauma has nudged all Ukrainian businesses to find ways to develop,” she said.

A short drive further south through fallow gray-brown sunflower fields took us to Zaporizhzhya, the heartland of what was once an independent settlement of Cossacks.

At a drafty gym on the city’s industrial outskirts, a group of young boys and girls dressed in baggy red Cossack pants were practicing fending off saber blows and body slamming one another, while one boy honed his technique with a whip. They were learning a Ukrainian form of martial arts called ‘spas,’ a tradition that had largely fallen out of favor during the Soviet era, their teacher, Yaroslav Pavlenko, explained. In the years since the war began, he said, there has been a concerted effort to revive it.

“Now that there is open aggression being committed against Ukraine, people’s minds are changing,” Mr. Yaroslav said, adding that “patriotism is now welcomed.”

Even while learning to fight, Mr. Pavlenko’s wife, Oksana, said, the children are shielded from news about the buildup of Russian troops. She avoids the news, herself, when she can.

“The last time I watched the news I had two desires,” she said. “The first was to run out to the store and buy supplies of buckwheat and sugar. And the second was to grab all my documents and leave the country.”

“Of course, logically I’m not prepared to do that,” she added.

It was dark by the time we reached Kherson, the last large city along the Dnieper before it flows into the Black Sea. But the yellow facade of the Dormition Cathedral was brilliantly lit, and the sounds of a choir echoed from within.

Inside, a troika of priests in marigold-colored mantles intoned prayers in a deep baritone.

In 2019, the Ukrainian Orthodox church was granted independence after 400 years of subordination to the patriarch of Moscow.

For many Ukrainians it was another victory in the drive to separate fully from Moscow’s influence. Parishes across Ukraine rushed to change their allegiances, though not all.

The Dormition Cathedral in Kherson remains loyal to Moscow, and some of its parishioners view Russia as a more benign force than many of their compatriots.

“For all of our existence dark forces have been trying to divide us,” said Lyudmila Ivanovna, who would only give her name and patronymic.

She was sympathetic to Russia’s intervention in eastern Ukraine, which she said had historically been one of the richest regions in the Russian Empire. Why should she have to speak a new language or go to a new church, she asked, “if we were all sent here by the same God.”

As we parted after the evening service, she assured me that she had nothing against Ukrainians from the west, who might hold different views.

“My husband is from western Ukraine,” she said. “It’s true, we divorced, but never mind.”