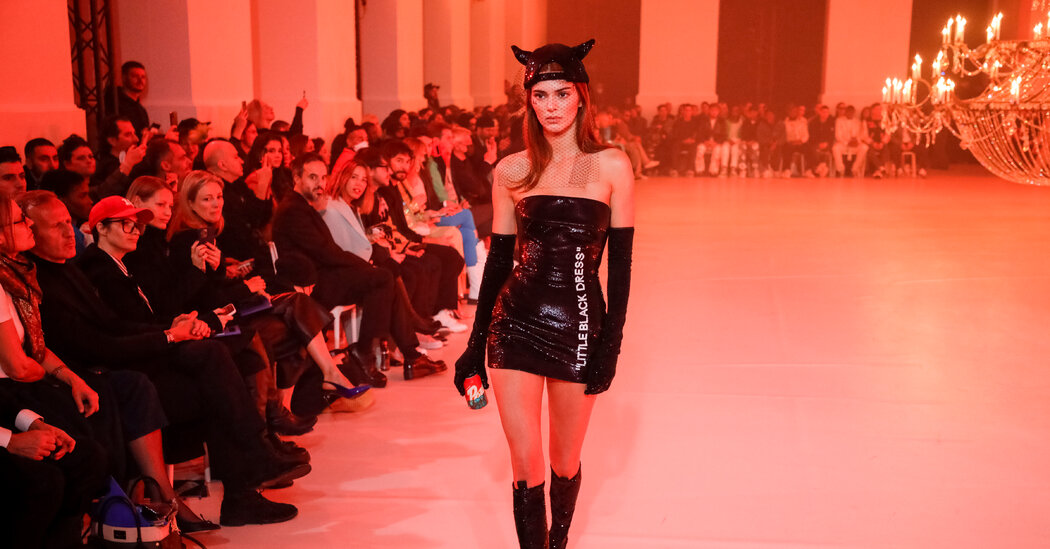 Those words, written in block letters, were a motto for Virgil Abloh, the barrier-breaking designer, artist, D.J., furniture maker and conversationalist; founder of Off-White and artistic director of Louis Vuitton men’s wear; a man who once described himself as a “cultural Robin Hood — steal from the snobs and give it back to some kids”; who died unexpectedly in November at age 41.

Those words were at the heart of his first retrospective, “Figures of Speech,” held at the Museum of Contemporary Art in Chicago in 2019. And they were borne aloft on a fluttering flag Monday, the first day of Paris Fashion Week, in the last Off-White show Mr. Abloh ideated before his death.

Which was itself both a retrospective — a tour through the foundational “codes” (as a voice-over called them) that he had established for the brand, and an argument for their ability to power it onward — and a leap into the future, with a new high fashion collection and beauty line.

After all, Mr. Abloh meant those words as words not just to remember, but to live by: Yeah, why can’t a brand go on even when its founder, a man many considered not just its heart and mind but its personification, is gone? And who says a guy who started out aiming to create a wearable dialogue between streetwear and ready-to-wear shouldn’t try his hand at couture too?

That’s why the event hadn’t been billed as a memorial, but as a celebration. And despite the somberness of the global situation, it was.

Rihanna and ASAP Rocky were there. So was Pharrell Williams. Carla Bruni, the former first lady of France. Idris Elba. The designers Olivier Rousteing of Balmain, Jonathan Anderson of Loewe and Tremaine Emory of Supreme. Michael Burke, the chief executive of Louis Vuitton, and José Neves, chief executive of Farfetch, which owns New Guards Group, the Italian manufacturer that helped create and nurture Off-White.

All sitting on chairs set out along the perimeter of a big white room, with a giant crystal chandelier and an equally elaborate amplifier arrangement arrayed in the center, watching as a parade of Abloh-isms appeared: looks for both men and women born from different traditions in animated conversation with each other. Black sweaters and body-con dresses came with asteroid-shaped cutouts; mohair harnesses topped tailored suiting; slouchy leather cargos were adorned with perfectly geometric patch pockets.

Thong straps were pulled up and over the hipbones under micro miniskirts. Jacquard was made with a graffiti print. There were giant fuzzy backpacks and big puffer chunky-heel Alpine boots with appliquéd pot leaves. Quoted phrases. At one point, Serena Williams sauntered out, in a stretch net dress over a tie-dyed bodysuit.

Later, for the haute (“haute”) section, so did seemingly every supermodel under the sun. Kendall Jenner wore a black sequined little black dress with the words “little black dress” on the side (a simpler version of which had appeared in the Metropolitan Museum of Art’s “Camp” exhibition in 2019). Cindy Crawford, an extravagant tiered tulle plissé skirt under a cropped tuxedo jacket and T-shirt, with a transparent handbag full of pills. Naomi Campbell, swishy turquoise crushed velvet trousers under a long evening coat with a matching top hat and the word “respectfully” on the back. There was also a crystal-embroidered bustier with the universal “no” sign on the front along with the word “Snitchin’.”

It was, in other words, pretty convincing proof that the foundation Mr. Abloh had laid was solid. That if once he was the brand’s embodiment, he could also serve as its north star.

And that while — like the central flag itself — he may have started off quoting almost everything and every designer, in the end his words and his work are quotable all on their own.