Was Canada Trucker Protest a Blip, or the Start of Something Bigger? 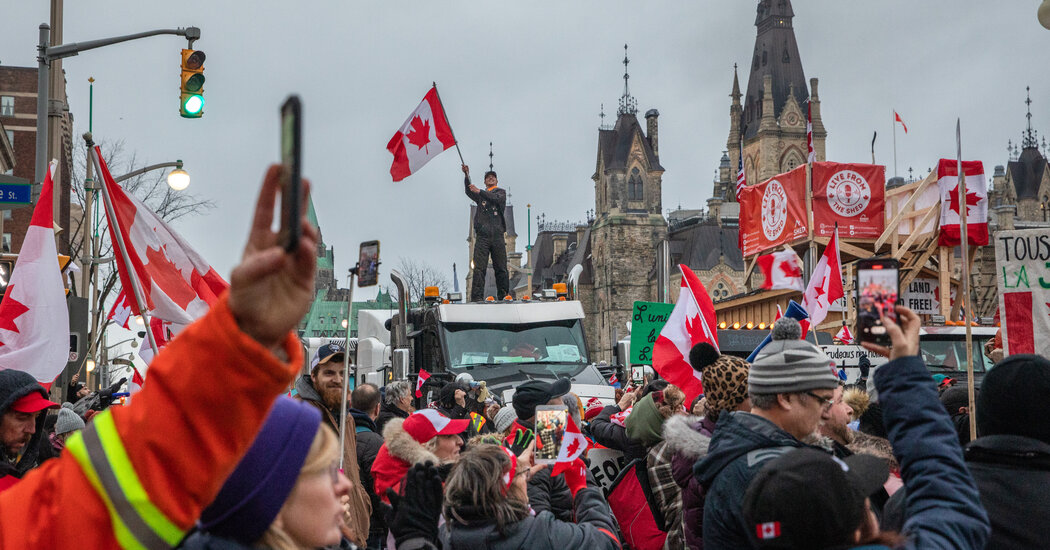 OTTAWA — A cavalcade of big rigs rumbled into the Canadian capital, blocked major streets, drew thousands of supporters, enraged residents and captured the attention of a shocked nation for three weeks. Now they’re gone, leaving Canadians to grapple with some high stakes questions about their country’s political future.

Was the occupation an aberration, or was it the beginning of a more fundamental shift in the country’s political landscape? Did their chaotic blockade alienate the public so much that the movement has no shot at a future, or did it form the base for a lasting political organization?

“There is a worry, and it’s been expressed in all kinds of ways, that this protest movement will become something much more significant and much more sustained,” said Wesley Wark, a senior fellow at the Center for International Governance Innovation, a Canadian public policy group. “It was given terrific oxygen to spread its message.”

The moment is uniquely tied to the pandemic: Protesters demanded an end to all government pandemic measures. But it is also part of a broader trend.

Social media was a driving force behind street protests of the past decade or so, uniting multitudes in occupations from Zuccotti Park in New York to Gezi Park in Istanbul. But research has shown that such movements often have a tough time converting their energy into real change.

By Sunday afternoon, streets in Ottawa that had been clogged with trucks, makeshift canteens and noisy protesters were largely empty except for police vehicles. A swath of downtown had been fenced off. A protester compound that had occupied a baseball stadium’s parking lot had been cleared — though about two dozen heavy trucks and a cluster of other vehicles reconvened about 100 kilometers outside the city.

During their three-week occupation, much about the protests alienated Canadians. At a border blockade in Alberta, the police seized a large cache of weapons and charged four protesters with conspiring to murder police officers.

But demonstrators also saw much of the disruption they caused as a tactical victory.

From the beginning in Ottawa, they caught law enforcement flat-footed. Some truckers said in interviews that they were surprised at being allowed to stay in the first place, and the city’s police chief resigned in response to the public anger over the sluggish pace at which the authorities moved to dislodge them.

One contingent in Windsor, Ontario, blocked a key bridge between Canada and the United States for a week, forcing auto plants to scale back production and disrupting about $300 million a day in trade.

The breakup of the demonstration came after Prime Minister Justin Trudeau, who has cast himself as a champion of human rights, invoked an emergency measure that gave the police the ability to seize the protesters’ vehicles and allowed banks to freeze their accounts. Mr. Trudeau’s decision prompted legal action to quash the order from the Canadian Civil Liberties Association, which called it “unconstitutional.”

The leader of the Conservative Party, Erin O’Toole, had tilted increasingly toward the center, but was forced out and temporarily replaced by a full-throated supporter of the protests. And Doug Ford, Ontario’s premier, lifted the proof of vaccination requirement and capacity limits for businesses slightly earlier than planned.

Neither move was directly tied to the occupation — Mr. Ford explicitly said he was not responding to protesters’ demands but to the public health trends — but both were celebrated as wins by the occupiers.

Perhaps most consequentially, under the eye of ubiquitous television cameras and livestreaming cellphones, the protests dominated the airwaves for weeks and generated conversation about coronavirus restrictions.

“The big lesson in all of this is everybody’s learned that we’re not actually powerless,” B.J. Dichter, an official spokesman for the convoy, said in an online discussion among supporters last week. Much has “happened as a result of all these people coming together,” he said.

But the demonstrators haven’t actually channeled the energy built up over weeks into a clear political force, experts said.

Maxime Bernier, the leader of the People’s Party of Canada, a right wing group that has no seats in Parliament, showed up to the protests — but he didn’t attract much more attention than any other speaker.

And though there were pockets of sympathy for the protesters’ frustration with pandemic rules, the bulk of Canadians resented their tactics and wanted them to go home, surveys show. In Ottawa, residents were angry that the authorities took so long to act.

“This thing was a truly fringe movement that got lucky, in my view, in terms of failures of policing,” Mr. Wark said. “I think this has been an extraordinary moment and flash in the pan.”

There were elements of right wing extremism tied to the protests around the country, where Confederate, QAnon and Trump flags had cropped up. Conspiracy theorists could be found milling about Parliament, too: people who believed big Pharma created the coronavirus in order to make money on vaccines or that QR codes allow the government to police our thoughts.

But the protests drew in thousands of people on some weekends, many of them just frustrated Canadians who didn’t want to be forced to get a vaccine or were just fed up with the pandemic and its restrictions. The majority of the more than $8 million donated to the truckers through GiveSendGo came from Canada, a data leak showed.

In interviews, trucker after trucker said this was his or her first protest. Michael Johnson, 53, parked his fire-engine-red truck in front of Parliament after his son suggested they drive in with the convoy. He stayed there until the very end.

“When we turned our headlights toward Ottawa, I don’t think any of us knew what we were driving into,” Mr. Johnson said. “I didn’t realize how bad it was until I got here.”

Understand the Trucker Protests in Canada

Voicing grievances. A demonstration by truck drivers protesting vaccine mandates has ballooned into a nationwide movement that has slowed the economy and brought life to a standstill in parts of Canada. Here’s what to know:

State of emergency. On Feb. 14, Prime Minister Justin Trudeau took the rare step of declaring a national public order emergency aimed at stopping the protests. The order allows the police to seize trucks and other vehicles, and the government to ban blockades in designated areas.

Mr. Johnson never got vaccinated and didn’t have to — hauling scrap metal around northern Ontario doesn’t require crossing the border. And he said he recently became a supporter of the right-wing People’s Party of Canada. But he believes the coronavirus is real and when people knocked on the door of his cab to talk about conspiracy theories, he refused to engage.

Every 10 minutes or so, someone stopped by to drop off money, give him a hug, or thank him.

Mr. Johnson has heard stories of people who lost their jobs because they don’t want to get vaccinated. His cab is plastered with appreciation letters from people who have told him that the movement made them feel, for once, that they weren’t crazy or alone.

“Telling people you either get this or you lose your jobs or you can’t go to places — it’s segregation,” Mr. Johnson said.

Carmen Celestini, a postdoctoral fellow at the Disinformation Project at Simon Fraser University in Burnaby, British Columbia, said that kind of protester, “the genuine people who are anti-vaccine,” has been overlooked throughout the occupation.

“Their voices have been ignored in much of this,” Ms. Celestini said, adding that, “because we keep shoving that underneath name-calling and not engaging, it’s going to fester.”

Mr. Johnson’s truck is the most valuable thing that he owns, and it is his livelihood. The risk of losing it left him anxious. When the police started closing in, his uncle and aunt begged him to go home.

“The realization of what I might lose from all this,” he said, “that’s scary.” There was a part of him that wanted the stakeout to just end. But he refused to pack up early.

“I’m too far in now,” he said, “If we show fear, everyone else will lose momentum.”

On Saturday, the police finally reached his door. A man walked up to shake his hand through the window one more time. Mr. Johnson walked out with his hands in the air, surrendering himself and his truck to the authorities. A crush of supporters let out a cheer. “We love you,” several people yelled.

Mr. Johnson was forced out of the protest along with everyone else gathered in front of Parliament. But he vowed to keep fighting.