We’re in Omicron Lockdown in the Netherlands. It Shouldn’t Have Happened. 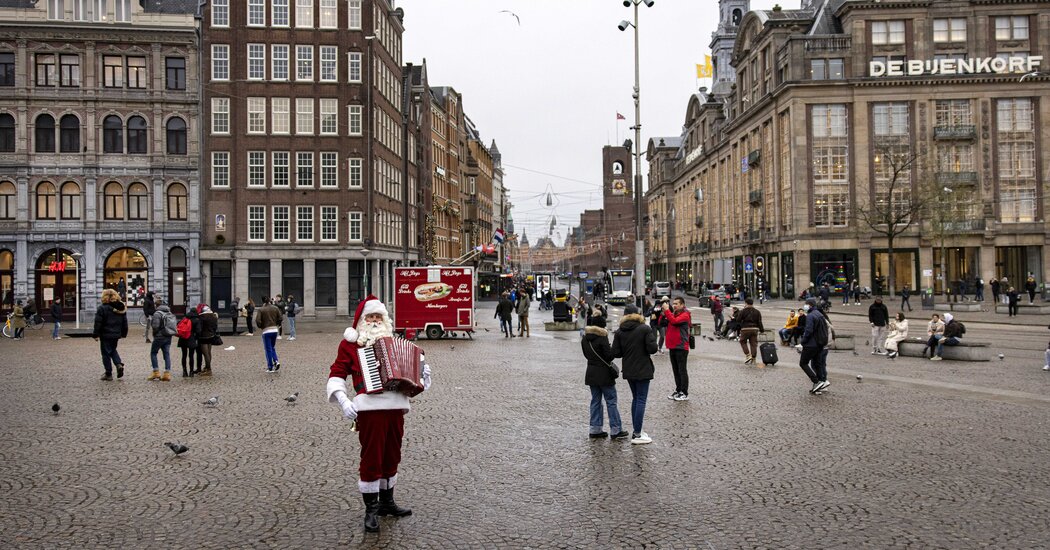 AMSTERDAM — Since 5 a.m. on Sunday, bars, restaurants, museums, schools, clothing stores, gift shops and anything resembling fun have been closed across the Netherlands. We’ve become the first European country to go back to lockdown life amid Omicron (until at least early January): It was “unavoidable,” said Prime Minister Mark Rutte. So here we are, looking over the borders enviously at holiday sales and seasonal celebrations in Belgian Antwerp. Once more, it doesn’t look a lot like Christmas.

The Netherlands’ lockdown stands as a warning to the United States, other European countries and Covid hot spots across the globe. The warning, though, isn’t just about Omicron — other countries have more coronavirus cases and worse vaccination rates than the Netherlands does, and they are not locking down (at least yet).

The warning is about policy failures — the failure to start a booster campaign sooner, to spin up free testing capacity quickly when needed, to persuade more groups of the benefits of vaccines and to ensure there are enough beds in intensive care. Now our hospitals are already full of patients who are infected with the Delta variant, and we probably won’t have enough beds for all of the people who need care if the Omicron wave hits vaccinated people hard too.

Think of the Dutch lockdown as a Ghost of Christmas Yet to Come, a Dickensian warning — in a country where the annual Dickens festival has been canceled — about the need for every country to be on its toes in the pandemic era.

So far this holiday season, Europe is trying to allow at least some festive cheer. While Austria enforced a sharp three-week lockdown and severe limits on the unvaccinated, many countries are still trying to avoid shutdowns. In Germany, the vaccinated will be able to have up to 10 guests at New Year’s parties; Boris Johnson is determined not to have new British restrictions yet; Belgium is closing certain indoor venues; and France has largely closed restaurants to the unvaccinated — but these countries are not at crisis point.

In the Netherlands, we are, because of the lack of strong and consistent crisis management. Part of the reason is that the government resigned in January and the country took 271 days to form a new one after the March elections. But our troubles also stem from ever-more-unhelpful ideas about freedom — a word with great resonance and many meanings here as well as in the United States and across the West.

The current Dutch lockdown was triggered foremost by a record-breaking average of 22,000 new infections a day at the end of November (in a country of 17.6 million), with severe cases largely among people who have chosen not to get vaccinated, and a rapid spread among school-age children.

Opinion Conversation Questions surrounding the Covid-19 vaccine and its rollout.

Hospitals gave dire warnings of “code black,” meaning they are running out of beds. Some patients were transferred to Germany. And on top of all this, Omicron — currently up to 15 percent of infections — is expected to cause another spike.

But haven’t we learned enough in the last two years to avoid stop-start lockdown as a gut-reaction pandemic response?

The recent history in the Netherlands helps show why the answer is frustratingly muddled. Although the country has seen frequent and sometimes violent protests against coronavirus prevention measures, vaccination compliance is high and 85.9 percent of people are fully jabbed.

However, the country has been criticized for going back to “normal” too quickly. In July, for instance, the government had to backpedal on an overenthusiastic loosening of restrictions, including on nightclubs, where high attendance led to “superspreader” events.

Then, in September, two days before the British National Health Service started its booster campaign, Dutch leaders canceled the country’s “one-and-a-half-meter-distanced-society” and told people it was OK to hug again. At the time, health minister Hugo de Jonge said confidently that “vaccine effectivity is high” so the country wasn’t starting a booster campaign.

Entry to events and spaces was based on a QR code for people who had been vaccinated, recovered from Covid, or could show a recent negative test. But the “test for entry” setup has been mired in problems.

The lesson from the Netherlands is that even an admirable level of vaccination is not enough: We need to think about long-term strategy, regular boosters and unlimited, free access to testing if countries want to avoid swinging between extremes.

Another trigger for this total lockdown is the Dutch adherence to freedom. Unlike in Austria, banning the unvaccinated from spaces and places is a hot potato for all political parties. Dutch personal freedoms are strongly protected in the constitution — but surely this ban would be better than lockdown, where we all pay the price?

Prime Minister Rutte has said repeatedly that he has “no intention” of imposing vaccination by law, at one point arguing that the Netherlands is a “slightly anarchistic country that doesn’t need a preachy government.” But some people have had enough: Just 52 percent of Dutch people support a hard lockdown, while trust in government coronavirus policy is at record lows.

Meanwhile, hundreds of thousands of small businesses now risk financial ruin, M.P.s say. “There’s a silent majority in the Netherlands, that together with business owners, the Royal Dutch Football Association, music venues, the culture sector are asking for alternatives,” Jan Paternotte, a center-left member of parliament, said on Tuesday.

Perhaps, as Mr. Rutte says, Dutch lockdown is a sign of things to come elsewhere with Omicron — we just got here first. Or perhaps Omicron will prove less virulent and burn out the worse strains to save us all.

But here we are again, with no Christmas spirit in our empty restaurants and a maximum of four guests a day (if we aren’t already infected or in quarantine).

It being the Netherlands, though, there’s often a workaround. One in seven people claim to have had a sneaky manicure, hair trim or massage. And just as Covid crosses borders, hundreds have gone shopping in Antwerp.

Senay Boztas is a British journalist who has lived in the Netherlands for more than a decade and has written and worked for media including The Guardian, The Sunday Times of London and the BBC.

The Times is committed to publishing a diversity of letters to the editor. We’d like to hear what you think about this or any of our articles. Here are some tips. And here’s our email: letters@nytimes.com.